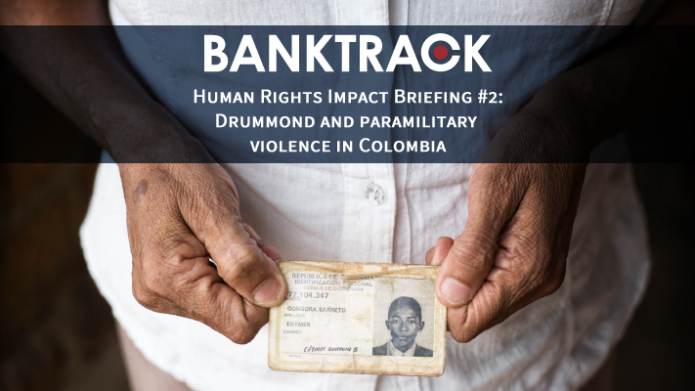 BankTrack today publishes the second in its series of Human Rights Impact Briefings, focusing on the coal company Drummond and the seven banks which have financed it since 2010. The briefing finds that despite allegations of their client's involvement in serious human rights violations only two of these seven banks were able to disclose any action taken in response.

The series of briefings intends to shed light on the extent to which banks are living up to their responsibilities under the UN Guiding Principles on Business and Human Rights, by examining specific human rights impacts linked to their finance. The series pushes for banks to account publicly for how they manage these impacts by publishing and comparing their responses .

Drummond produces the majority of its coal in the Cesar mining region of Colombia, an area in which paramilitary violence has had profound impacts for the local population. Conservative estimates suggest paramilitaries drove over 55,000 farmers from their land and killed at least 3,100 people in the period from 1996 to 2006, with the intention of defending the interests and properties of the local economic elite against guerrilla activities.

The Dutch peace movement PAX has investigated reports of links between this violence and mining companies operating in the area, including Drummond. Legal testimonies examined by PAX indicate that Drummond and other mining companies supported the paramilitaries in several ways, including requesting their establishment and financing them - allegations Drummond strongly denies. However the company has to date resisted any involvement in supporting the victims of violence in their efforts to secure remedy for the gross human rights violations they have suffered.

BankTrack presented the seven banks that had provided loans to Drummond since 2010 with details of these allegations. Under the UN Guiding Principles, businesses have a responsibility to perform human rights due diligence to prevent or mitigate human rights impacts linked to their services, and to report on how they address these impacts, particularly when concerns are raised on behalf of those affected.

Only two banks - Citigroup and BNP Paribas - responded with details of how they had sought to address these impacts. In a welcome move, BNP Paribas responded that it has suspended finance with Drummond for environmental and human rights reasons. Citigroup reported that it has engaged with Drummond on issues including security and human rights, but its response indicates it is satisfied that human rights are well-managed at the company.

Bank of America, BBVA, HSBC, Mizuho Financial and Wells Fargo did not disclose any  response to the issues identified, and showed no evidence that they are meeting the requirements of the UN Guiding Principles in this case. With the exception of BBVA, the banks stated that as a general policy they do not, or cannot, comment on their links to specific companies they finance.

Ryan Brightwell, BankTrack's Human Rights Campaign Coordinator, commented, "In saying they will not comment on specific clients, Bank of America, HSBC, Mizuho Financial and Wells Fargo are in effect saying they cannot meet their responsibilities under the UN Guiding Principles. Yet other banks, often in the same legal jurisdictions, have shown that it is possible.

"Regardless of whether they are prepared to account for their actions publicly, we ask all banks who have financed Drummond to engage with the company, and make any further finance contingent on tangible steps to support a reconciliation process for the victims of violence surrounding their mines."