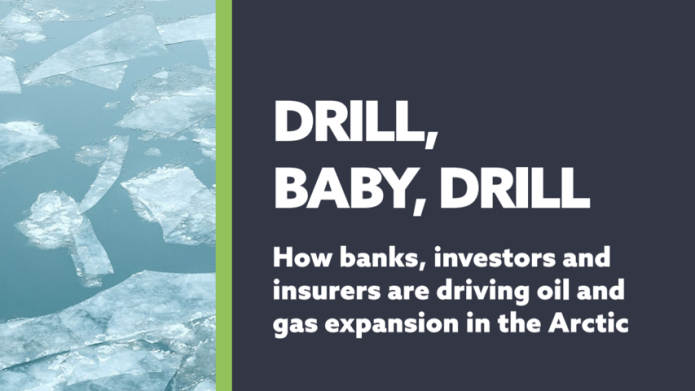 Oil and gas companies are set to ramp up production in the Arctic by 20% in the next five years (1), according to a new report from NGO Reclaim Finance (2). These Arctic ‘expansionists’ (3) – such as Gazprom, Total and ConocoPhillips (4) – have, it is revealed, been backed by hundreds of billions of dollars of support from banks and investors, despite many holding commitments to restrict fossil financing in the region.

The findings come just weeks after the International Panel on Climate Change warned of accelerating climate breakdown in the Arctic, with temperatures rising twice as quickly as elsewhere, while NASA is set to release its annual survey of Arctic sea ice loss in the coming days. Worryingly, the Arctic oil and gas ‘bonanza’ threatens to consume 22% of the world’s remaining 1.5°C carbon budget, while devastating local communities and biodiversity.

Commenting on the findings, campaigner at Reclaim Finance and report author Alix Mazounie said: “The Arctic is a climate bomb, and our research shows that the oil and gas industry is hellbent on setting it off, thus blowing up our chances of avoiding runaway climate breakdown. But they are not the only culprits: financial institutions have bankrolled these companies, making a mockery of their own climate commitments. Since the oil & gas tigers won’t change their stripes, the likes of BNP Paribas, BlackRock and JPMorganChase must heed the instruction of the International Energy Agency and cut off the taps.”

Despite numerous commitments from financial institutions not to support oil and gas extraction in the Arctic, the report lays bare their fundamental design flaws. Thus while 20 of the top 30 banks fueling expansion in the Arctic region have so-called Arctic restriction policies, not a single one excludes support to companies developing new oil and gas projects in the region. Notably, HSBC and BNP Paribas were the top financiers of Arctic expansionists in 2020, despite adopting Arctic exclusion policies early on compared to their peers.

The report’s authors ascribe the fault to highly porous policies. Financial institutions such as AXA and Morgan Stanley have adopted highly limited definitions of the Arctic which permit ongoing expansion, while Goldman Sachs and Crédit Agricole are among several financial players restricting financing only to oil projects, there by permitting fossil gas, against the clear mandate of the IEA’s 1.5°C scenario. Crucially, policies often fail to effectively cover corporate financing, the major source of Arctic oil and gas financing.

Mazounie concluded: “As net-zero alliances proliferate, this report shines a harsh light on the realities of climate commitments in this precious region. The truth is that for most financial players, Arctic exclusion policies are mere fig leaves, failing to end support for oil and gas expansion. In this decisive hour for climate action in the run-up to COP26, financial institutions need to adopt the AMAP Arctic definition and end all support for oil & gas expansion in the Arctic, be it through projects or corporate financing. Passing the buck will no longer cut it.”