Home › Blog
BNP Paribas and Société Générale: stop financing climate destruction and human rights abuses
We report back from the two French bank AGMs of this week, where they were called out on finance for fossil fuels, forest biomass and illegal settlements
By: Giulia Barbos – BankTrack, Hannah Greep – BankTrack & Sumeyra Arslan – BankTrack
2022-05-19 Contact: 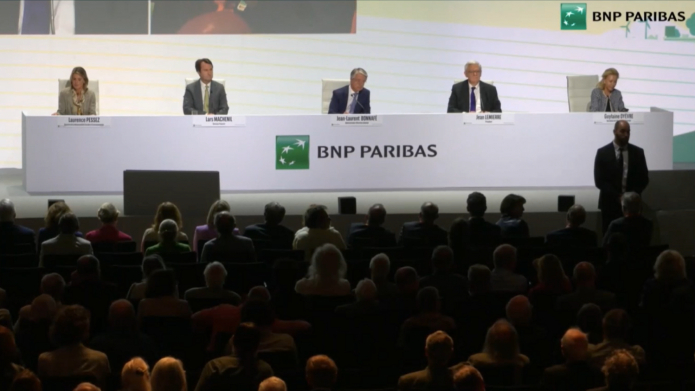 Activists were out in force this week at the annual shareholder meetings (AGMs) of French banks BNP Paribas and Société Générale. Both banks were confronted over their continued finance for the fossil fuel industry, including a recent loan to TotalEnergies which could be used for the controversial EACOP pipeline. Société Générale was also questioned about its finance for companies involved in forest biomass, and BNP Paribas was called out for continuing to finance companies actively involved with Israeli illegal settlements in the Occupied Palestinian Territory (OPT).

BNP Paribas and Société Générale provided US$ 142 billion and US$ 87 billion, respectively, to the fossil fuel industry between 2016 and 2021. A large portion of this finance - US$ 54.8 billion from BNP Paribas and US$ 33.5 billion from Société Générale - was given to the 100 key companies expanding fossil fuels, including TotalEnergies, Chevron and ExxonMobil. This is despite the International Energy Agency (IEA) stating that, in order to have a 50% chance of staying within the 1.5°C target, there is no room for new oil and gas fields.

The topic of fossil fuels could not go unnoticed at BNP Paribas’ AGM, with activists from Les Amis de la Terre sounding alarms and chanting throughout the Board members’ presentations on CSR and climate. 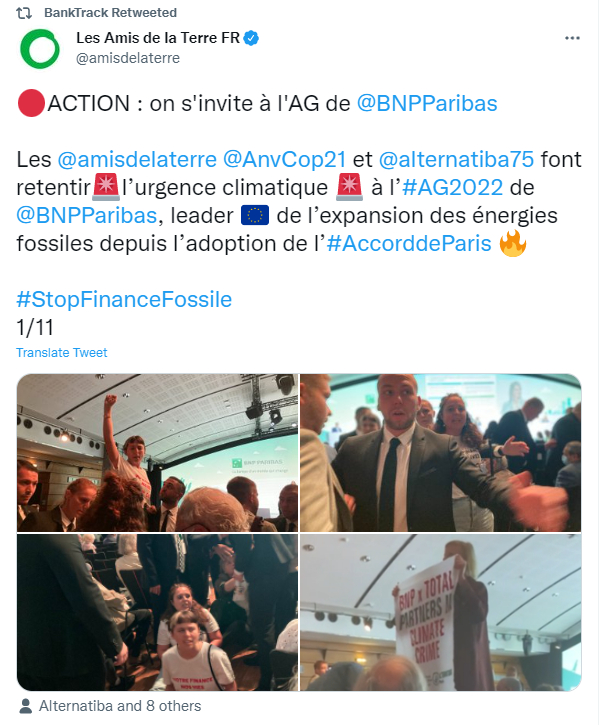 Reclaim Finance asked Société Générale if the group recognises the climate imperative that requires stopping all support for oil and gas expansion. The bank declared that it was reducing its exposure to oil and gas exploration to "move towards a less carbon-intensive economy", while keeping support to oil and gas majors in transition. This argument is inconsistent: far from being in transition, oil majors like ExxonMobil, Chevron and TotalEnergies are among the top ten developers of new oil and gas projects in the world. This is totally incompatible with a 1.5°C scenario as put forward by the IEA and the latest IPCC report.

For example, just last week, both banks acted as bookrunners for a US$ 8 billion general-purpose loan to TotalEnergies. The loan could be used to support fossil fuel expansion projects including the East African Crude Oil Pipeline (EACOP), a destructive project which both banks have said they would not finance directly.

In response to a question posed by French activist Camille Etienne, BNP Paribas’ Chief Executive Jean-Laurent Bonnafé argued that this is a general-purpose loan intended to provide liquidity in the energy industry, and not intended to finance a specific project. However, the bank provided no details of any conditions that would prevent the loan being used for the EACOP or any other new fossil fuel projects. Even if the loan does not directly go to specific fossil fuel projects, it will free up funds from within the company, making it possible for Total to redirect other funding to its fossil fuel expansion projects.

Biomass is widely – but wrongly – considered a form of renewable energy, and supply and demand for wood biomass is expected to increase over 250% in the next decade. Burning wood biomass for energy is not carbon neutral, immediately emitting large quantities of greenhouse gases into the atmosphere, while forests need decades or centuries to regrow and sequester the carbon. This  means burning biomass cannot effectively contribute to staying within the 1.5°C Paris Agreement target for 2050, but rather undermines this target.

Despite this, Société Générale continues to consider biomass as a renewable energy, financing some of the biggest companies involved in the burning of forest biomass. This includes ENGIE, RWE and Vattenfall. Ahead of its AGM, BankTrack asked Société Générale if it is aware of evidence that shows forest biomass produces greater levels of carbon emissions than fossil fuels like coal, and how their finance for these biomass companies fits into the bank’s net zero target. The bank failed to answer our question, although it has said written answers will be published online.

BankTrack is calling on banks like BNP Paribas and Société Générale to move #BeyondBurning fossil fuels and wood biomass for energy, and instead direct their money towards genuine renewable energy solutions.

Last September, the first report of the international “Don’t Buy into Occupation” Coalition showed BNP Paribas to be Europe’s biggest lender to the 50 settlement-supporting companies covered in the report, by a significant margin. In total BNP Paribas provided US$ 17.30 billion in loans and underwriting to 27 of these 50 companies in recent years, almost 50% more than its nearest rival Deutsche Bank. 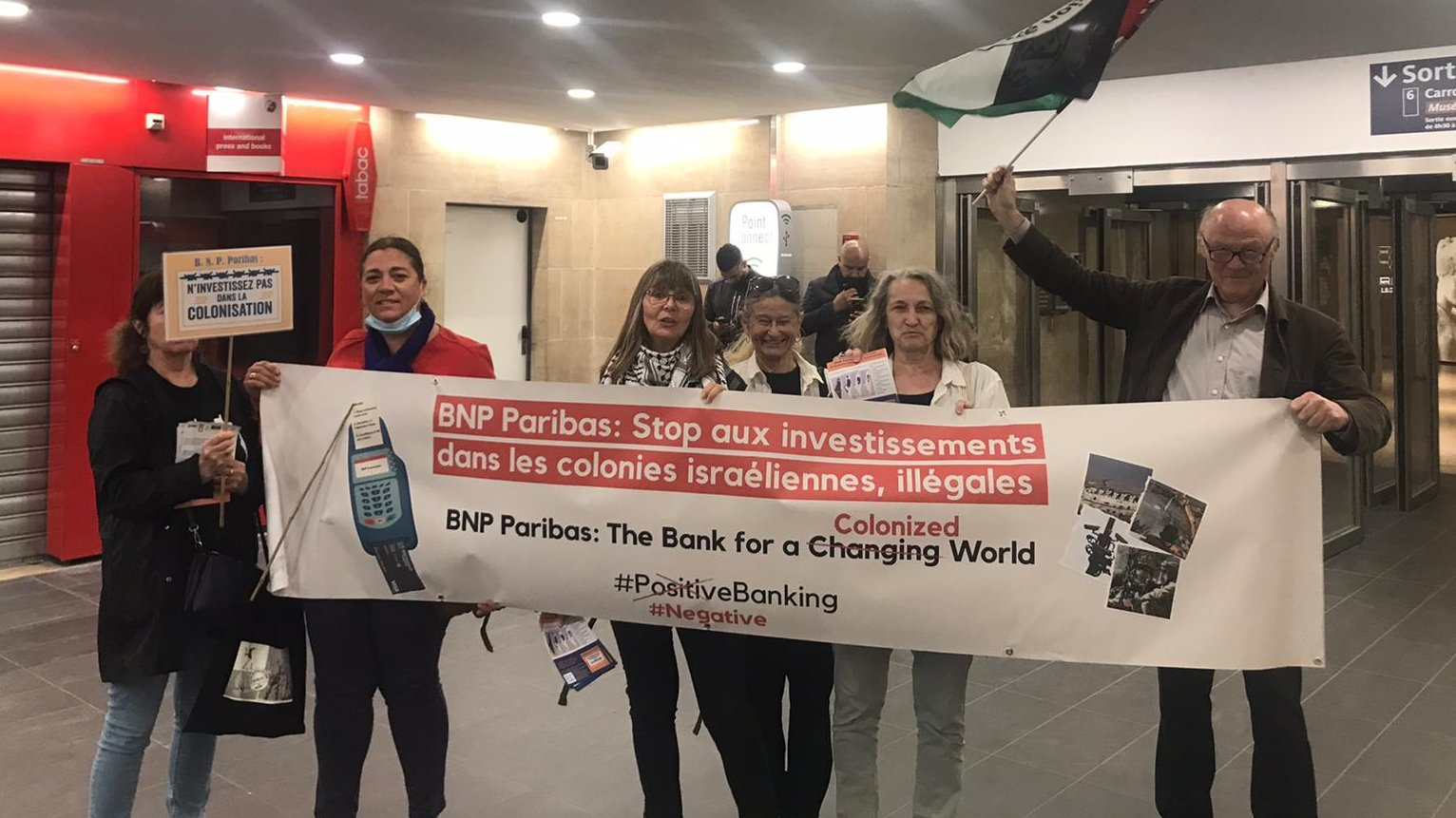 BNP Paribas has made no response to the findings of the report, despite the Coalition’s several attempts to contact the bank. BankTrack and the Coalition therefore turned to the AGM to ask the Board of Directors what they’re doing to ensure the bank does not finance companies with proven, direct links to the expansion of the illegal Israeli settlements. BankTrack submitted a written question ahead of the AGM that the bank responded to online, and a shareholder also asked the Board directly at the AGM.

Both questions received the same answer: “These are situations that we look at with due seriousness and vigilance. We can assure you that in this circumstance, as in any other situation of this nature, our Code of Conduct and all of our engagement policies are rigorously applied.”

This answer unfortunately is not reassuring, and indicates that the bank is not giving this issue the attention it deserves. People and communities in the Occupied Palestinian Territory are seeing their homes demolished, their natural resources exploited, and their rights violated, and BNP Paribas’s corporate clients are contributing to this. Hiding behind a Code of Conduct is not enough; BNP Paribas must take concrete steps to end its ties with businesses involved in the illegal Israeli settlement enterprise.

As many banks have shifted back to in-person AGMs this year, they might well have been surprised by the scale of resistance and anger over their contribution to climate change and human rights abuses. Beyond France, we’ve seen actions at UK banks HSBC and Barclays earlier this month where activists also went to great lengths to let shareholders, directors and the public know, sometimes noisily, exactly what their bank is financing. It is high time these banks listened and, more importantly, took action.

Stay tuned on Twitter at @BankTrack and @NoFossilBanks to see more updates from bank AGMs as the season continues to unfold.