Home › Blog
Behind banks' smokescreen
What banks aren't telling you about their 'climate ambition'
2018-12-13 Share this page: 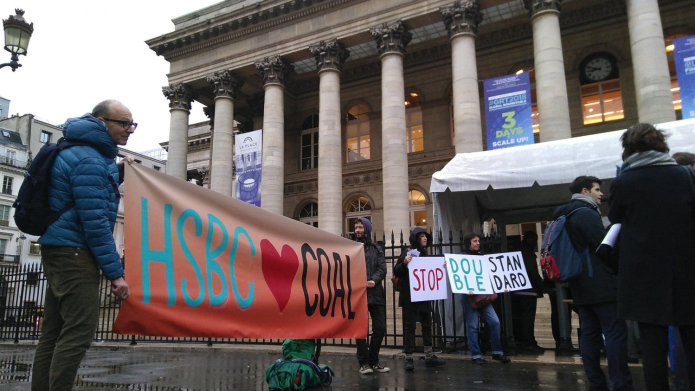 The UN climate talks in Poland - COP24 - will shortly conclude. For two weeks we’ve seen climate justice campaigners and activists from across the world highlight the failures of our governments and voice their demands.

The promotion of false solutions, a lack of climate finance commitments, and the industry’s interference in the process are some of the issues exposed by civil society groups throughout the negotiations. It is more evident than ever that our world leaders are failing to take the level of action required by the scale of the crisis.

The lack of ambition highlighted by civil society at COP24 is something we also recognise in the banking sector, which is falling short on action to address the climate crisis. If banks are to be part of the solution, they need to step-up their ambition and end their support for the climate-wrecking fossil fuel industry.

To do so they will need to move away from the false narratives they are hiding behind and start making appropriate - and urgent -  commitments.

Due to its lower carbon footprint, the oil and gas industry and lobby have branded gas as a cleaner source of energy, contributing to a transition away from fossil fuels. However this misleading claim prevents us from looking at the whole picture. If the large amounts of methane emitted along the gas life cycle are taken into consideration the impact of gas on our climate is very much comparable to that of coal. 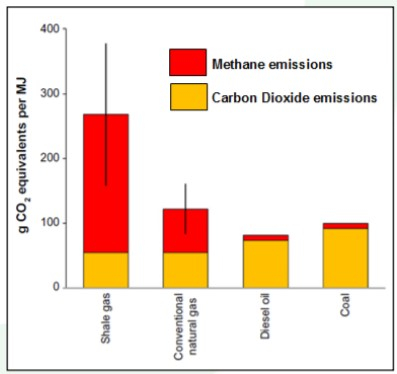 Yet many banks have bought into the narrative of gas as a bridge fuel. Gas is for example defined as “a transition fuel” by the Australian Commonwealth Bank, or depicted as “an energy compatible with the world energy transition” by French bank Société Générale. Further, British bank HSBC explains in its energy policy that, whilst coal will need to be phased out, “oil and gas have a longer-term role to play in the transition and represent an important part in the energy mix of many markets.”

We can see how this narrative translates concretely if we look at where major banks are putting their money. Between 2015 and 2017, support from 34 of the world’s top banks for liquified natural gas (LNG) export terminals in North America amounted to over $45 billion. LNG projects across the world have been linked to disastrous impacts on communities and the climate. And LNG makes up only a fraction of global gas infrastructure.

The finance sector met in Paris in late November to discuss climate action during a meeting hosted by the UNEP Finance Initiative, and banks didn’t shy away from promoting gas as a transition fuel.

When we confronted a panel of bank CEOs with the inconsistency between their promotion of climate finance and their continuing support for the fossil fuel industry, we were told by Société Générale’s CEO Frédéric Oudéa that we still need fossil fuels - and especially “cleaner” ones such as gas - to transition to a low carbon economy. The French bank’s statement didn’t come as too much of a surprise as Société Générale is renowned as a big supporter of the LNG industry.

Public banks, too, are contributing to the spreading of this misleading narrative. In Paris we also heard the European Investment Bank (EIB) promoting the construction of new gas pipelines, including the Trans Adriatic Pipeline which the EIB is backing with a huge 1.5 billion euro public loan. Notably, Société Générale is also deeply involved with TAP as the highly controversial project’s financial advisor, with other private banks also lining up finance.

This widespread promotion of gas as a “cleaner” source of energy poses a massive threat to our climate. If politicians keep pushing for new gas infrastructure, with ongoing financial support from major banks, these infrastructure projects will lock us in to yet more greenhouse gas emissions which will tip us over the edge of the 1.5 degrees limit.

We need banks to acknowledge that gas is not a bridge to renewable energy. We need them to recognise that gas is a fossil fuel, and that there is no room for new fossil fuel infrastructure, including gas, if we are to avoid climate breakdown. We need, more than anything, for banks to end their financial support to all fossil fuels, including all types of gas.

Not only is the finance sector failing to deliver proper commitments to address the climate crisis, and promoting false solutions like gas, it is also placing its ambition far below what humanity and our planet need. In their policy statements and the promotion of their climate action, many banks are pledging to align with the 2 degrees warming aim, supposedly meeting the requirements of the Paris Agreement. 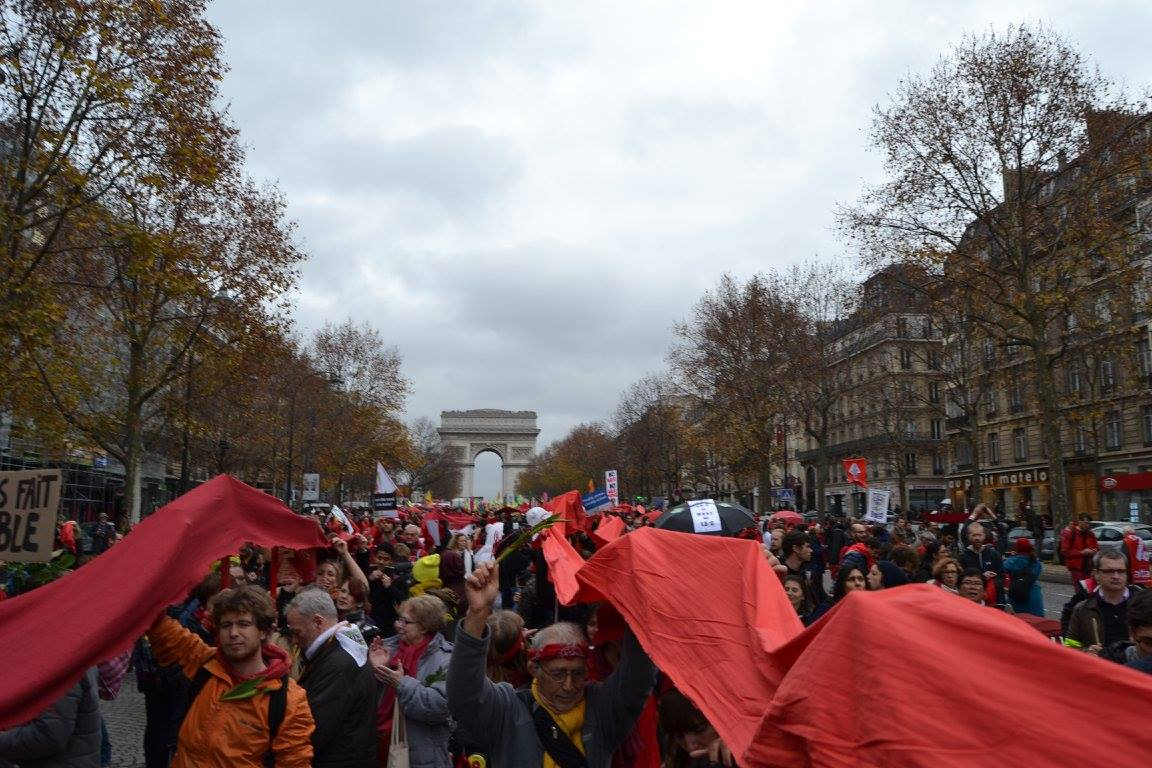 At COP21 people gathered in the streets of Paris to draw the red line of climate justice.
Photo: Lise Masson

Australian bank NAB, for example, has set a greenhouse gas emissions target in line with its “commitment to the internationally agreed goal to limit global warming to less than 2 degrees Celsius above pre-industrial levels.” Spanish bank BBVA, too, refers to 2 degrees as the overarching aim, promoting its efforts to “certify that emission goals are consistent with the decarbonization level required to meet the 2ºC goal set for 2050.”

Beyond this, when talking about ways to achieve this, banks mainly refer to the 2 degree scenario (2DS) presented by the International Energy Agency (IEA). The IEA’s scenario sets “an energy system pathway and a CO2 emissions trajectory consistent with at least a 50% chance of limiting the average global temperature increase to 2°C by 2100.”

Given the influence of the IEA’s guidance on banks, the institution missed the opportunity to show real climate leadership and provide a 1.5°C scenario. Indeed we have witnessed a large buy-in to the 2 degrees scenario from major banks. French bank Société Générale committed at COP21 to “align activities by 2020 with the International Energy Agency's (IEA) trajectory to limit global warming to 2°C.” Belgian bank KBC too presents its “support for the Paris COP21 Agreement and the 2° scenario a general reflection of its broader ambition (...) of contributing towards a low-carbon society.”

Can an overall goal that rests on a 50% chance of limiting global warming to 2°C by 2100 really meet the level of ambition required to address the climate crisis?

The difference between 1.5 and 2 degrees of warming might seem minor. But in reality this gap represents the life and livelihoods of millions, populations displaced by climate impacts, major heat waves, floods, and storms wrecking entire communities. This 0.5 degrees gap is a tipping point, separating us from climate breakdown.

As we are already witnessing today the disastrous impacts of a rapidly warming climate, we need to make clear that this compromise is not acceptable. We need the finance sector to understand that we will not accept false solutions and excuses that will lead so many people to lose their homes, livelihoods and lives. We are drawing the line at 1.5 degrees.

We need the finance sector to shift its focus away from 2 degrees, to step up ambition towards a 1.5 degrees objective, to align with what climate justice requires. Concretely this means immediately ending all support for new fossil fuel projects, and committing to phasing out all remaining support for fossil fuels in a timeline consistent with a 1.5 degree target.

This is why we’re asking 38 banks, the biggest fossil fuel financers, to commit to stop financing fossil fuels completely by COP25 next year. Join us, and sign the Call for Banks at fossilbanks.org.