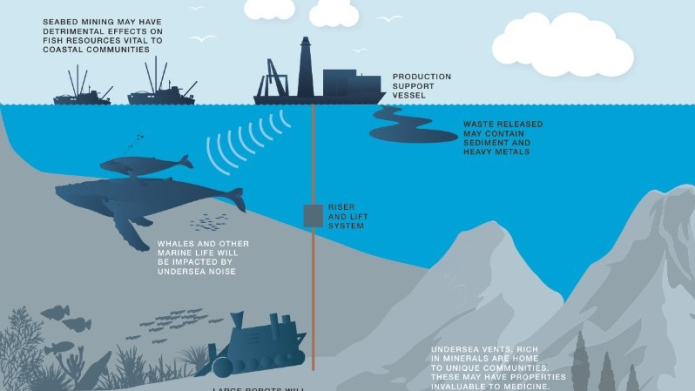 In a last ditch bid to rescue its experimental deep sea mining project ”Solwara 1”, the two largest shareholders of Nautilus Minerals Inc, Russian mining company Metalloinvest and Omani conglomerate MB Holdings, have formed a new company whose sole job is to secure funding for the project by October 31st .

It is expected that the first call will be on existing financiers of Nautilus, Metalloinvest and MB Holdings. These include HSBC (United Kingdom), ING Group (Netherlands), BNP Paribas and Société Générale (France); ABN Amro (Netherlands), and Unicredit (Italy) .

The Deep Sea Mining Campaign (DSMC) and BankTrack are calling on the banks to publicly distance themselves from this financially and ecologically risky project.

Canada-based Nautilus Minerals has staked its reputation on the Solwara 1 project, which if successful would become the world's first deep sea mining operation . However the wannabe deep sea miner has so far failed to inspire investors with confidence. Nautilus' financing strategy for Solwara 1 has been spectacularly unsuccessful. Commercial operation has been delayed year after year since it received its licence to mine the floor of Papua New Guinea’s Bismarck sea in 2011.

The Solwara 1 project is deeply opposed by local communities, churches and wider civil society in Papua New Guinea. Most recently, PNG's former Attorney General and Governor of Madang Province issued a warning to potential investors of the high level of financial and environmental risk inherent in the project.

Dr. Helen Rosenbaum of the Deep Sea Mining campaign said, “Deep Sea Mining is risky business as both the environmental impacts and the returns are complete unknowns. Nautilus’ Annual Information Form, lodged with Canadian securities, emphasizes the experimental nature of the Solwara 1 project . This level of risk has scared off responsible investors who weigh up the likely exposure to social and environmental risks and the value erosion that goes with that. In regards to Nautilus, they have voted with their wallets.  We urge banks and other financiers to do the same.”

Coastal Communities in Papua New Guinea have formally requested that the PNG Government make public key documents relating to the licensing and the environmental impacts of the Solwara 1 deep sea mining project or face legal proceedings.

Johan Frijns, BankTrack Director, commented, "Experience with other mining projects shows us that local opposition often results in legal and public relations disasters for companies and their financiers.  The costs of community resistance to mining projects has been well documented .  Banks receiving proposals from Metalloinvest and MB Holdings to rescue Nautilus would be well advised to conduct a rigorous risk analysis."

Nautilus announced on 11 October the formation of Deep Sea Mining Finance Ltd. ("DSMF") which will seek to leverage the international expertise and financial relationships of Nautilus' two major shareholders to assist in advancing the development of the Company's Solwara 1 Project.

Research commissioned by the DSM Campaign indicates that these banks provide both loans and bond issuances. See Annex 1 for more details.

If it proceeds, the Solwara 1 mine will be located in the Bismarck Sea of Papua New Guinea, approximately 25 km from the coastline of New Ireland Province, about 35 km from Duke of York Islands and 60 km from Kokopo township in East New Britain. See BankTrack's Dodgy Deal profile for more details on the project.

See sections on Risk factors in Annual information forms for financial years 2015 and 2016. For example:

"Our operations are speculative due to the high-risk nature of business related to the exploration and acquisition of rights to potential mineable deposits of metals. These risk factors could materially affect the Company’s future results and could cause actual events to differ materially from those described in forward-looking statements relating to our Company." (FY 2016, p 52)

"... Performance, availability, reliability, maintenance, wear and life of equipment are unknown. There can be no guarantee that sub-sea engineering and recovery systems can be developed or if developed, will be employable in a commercially-viable manner."  (FY 2015, p54)

"... while Company studies have indicated a low likelihood of risk to the aquatic environment from mining activities, the actual impact of any SMS mining operations on the environment has yet to be determined.” (FY 2015, p61)

"Nautilus has not completed and does not intend to complete a preliminary economic assessment, pre-feasibility study or feasibility study before completing the construction and first deployment of the Seafloor Production System at the Solwara 1 Project.”

"No independent Qualified Person has confirmed the amount of these costs or recommended that these costs be incurred. There is significant risk with this approach and no assurance can be given that the Seafloor Production System, if fully funded and completed for deployment at the Solwara 1 Project, will successfully demonstrate that seafloor resource development is commercially viable." (FY 15, p52)