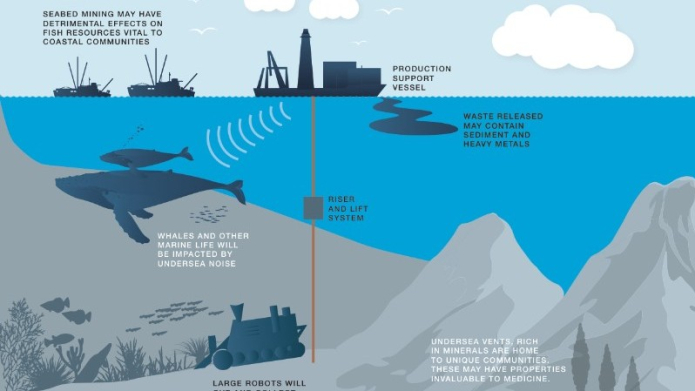 The Solwara 1 project, being developed by Canadian company Nautilus Minerals, is intended to extract high-grade Seafloor Massive Sulphide (SMS) deposits of copper, gold, zinc and silver from the Bismarck Sea, Papua New Guinea. The project is set at 1,600 metres water depth and if developed would be the world's first deep sea mining project. Solwara 1 is located approximately thirty kilometres from the nearest coast (New Ireland Province) and fifty kilometres north of the international Port of Rabaul (East New Britain Province).

The project is expected to start its operations in 2018. It has been granted an operating license by the Papua New Guinea Government without having been given free, prior and informed consent of nearby coastal communities.

Nautilus has no source of revenue and will need to raise additional equity, debt or joint venture partner funding to advance the development of the Solwara 1 project.  Nautilus requires at least USD 125 million to USD 175 million and will need to approach the market to secure the funds it needs. Nautilus has not conducted standard economic assessments of the project and any financial supporter of Solwara 1 will find itself exposed to a high level of risk.

Update: As of September 2019 the Solwara 1 project has collapsed, with the project backer Nautilus going into administration.

The Solwara 1 project will have a devastating impact on the marine environment and the health, livelihoods and cultures of nearby coastal communities. Financial institutions should steer clear of Nautilus and not provide funds for this high risk, experimental project.

The lives of nearby coastal communities depends almost entirely on the sea.  People have spiritual and cultural connections to the sea, and rely on the sea for their livelihoods. People fear that the Solwara 1 project will result in a loss of identity and livelihood.

The Solwara 1 project has the potential to undermine people's right a livelihood, health and culture.  Nautilus is proceeding with the Solwara 1 project without the free, prior and informed consent of coastal communities. The right to free, prior and informed consent is an important right itself and acts as a safeguard to protects other rights - such as to a livelihood.

New research reveals experimental seabed mining could have a devastating impact on life forms that are 'literally saving the planet' and preventing a 'doomsday climatic event'. The research lists experimental seabed mining as a major threat to ocean life residing around hydrothermal vents which has been found to consume enormous quantities of methane that would otherwise enter the atmosphere. Source: Papua New Guinea Mine Watch. Read more here.

A study carried out between 2002 and 2007 estimated that there could be more than 1,000 species at a single site in the key region proposed for mining. According to the Global Ocean Commission, "mining at the seafloor will cause localized damage, including crushing living organisms, removal of substrate habitat and disturbance of sediment", with further environmental impacts during processing. They list rising demand for resources, technological advances and weak high seas governance as "drivers of decline" for the oceans (source The Huffington Post).

As of September 2019 the Solwara 1 project has collapsed, with the project backer Nautilus going into administration.

According to Mining Journal: "The company was unsuccessful to raise enough cash to successfully develop its Solwara 1 deepsea deposit. Working against it too was the pioneering nature of its project, and strong organised resistance from local and international non-governmental agencies who argue not enough is known about mining's potential impact on the ocean floor and surrounding water columns."

The Guardian reports that following the company's collapse the President of Fiji made a call for a 10-year moratorium on deep sea mining in the Pacific, which has been supported by the prime ministers of PNG and Vanuatu.

Anglo American has exclusively confirmed to the Deep Sea Mining Campaign that they have exited their investment in the Nautilus Minerals Solwara 1 deep sea mining project.

Legal action launched over the Nautilus Solwara 1 Experimental Seabed Mine

Coastal Communities have launched legal proceedings against the PNG Government in a bid to obtain key documents relating to the licensing and the environmental, health and economic impacts of the Solwara 1 deep sea mining project. Read more.

In a corporate update Nautilus stated that "the Company's current cash position and budget, in order to maintain the Company's operations and the development of the Solwara 1 Project, the Company needs to obtain new funding

of approximately USD 41 million prior to the end of 2017 and, in particular, at least approximately USD 15 million is required before October 31, 2017 in order to meet the Company’s contractual commitments in relation to certain of the equipment forming part of the seafloor production system." In a second press release Nautilus stated that two of its major shareholders are to assist in finding finance for the development of the Solwara 1 Project.

Canadian mining company Nautilus Minerals is facing a severe financial crisis that threatens not just its plans for experimental seabed mining in Papua New Guinea, but the future of the whole company. Nautilus says not only is it delaying any further project spending, it desperately needs short-term emergency funding to continue company operations to allow staff more time to look for ‘significant additional funding' or an ' alternative transaction aimed at maximising shareholder value'. Nautilus says 'there can be no assurances that the company will be able to obtain the necessary bridge financing or project financing on acceptable terms or at all. This may lead to suspending or terminating the development of the seafloor production system and the Solwara 1 Project.'  (source: Papua New Guinea Mine Watch).

Toronto Ontario, June 29, 2016 - Nautilus Minerals Inc. announces that, further to the Company's news release dated April 8, 2016, the Company continues to seek and consider various alternative sources of financing in order to maintain the development of the Solwara 1 project and the company's operations.

Several financial institutions have provided corporate loans or underwritten bonds to MB Holding and Metalloinvest (the two major share holders of Nautilus Minerals) or their subsidiaries since 2013. See below.

Note these banks are not involved with financing the Solwara 1 Deep Sea Mining Project directly. Rather, they are listed here as they are considered likely to be called upon to finance the project, given the stated financing strategy for the project, and because they should be in a position to engage with these companies regarding the risks of this project.

Metalloinvest Holdings (Cyprus) Holdings Ltd is a wholly-owned subsidiary of Metalloinvest JSC, which is in turn is a subsidiary of USM Holdings, the company that manages the assets of one of Russia’s richest oligarchs, Alisher Usmanov (source). Alisher Usmanov also owns 48% of USM Holdings. He is listed on the US Treasury's 2018  "oligarch list" of individuals that are closely affiliated with the Russian government.

The world’s first sea-mining project will go ahead despite unknown environmental and social consequences and uncertain profits.
2018-02-19 | Eco-Business
blog
external news
our news

Legal action launched over the Nautilus Solwara 1 Experimental Seabed Mine

Biodiversity loss from deep-sea mining will be unavoidable

Can deep-sea mining avoid the environmental mistakes of mining on land?

Nautilus to Go Under Before Reaching the Ocean Floor

Nautilus Looks to Save Its Deep Sea Mining Project

Out of Our Depth: Mining the Ocean Floor in Papua New Guinea

For all the latest news on experimental deep sea mining in the Pacific
https://ramumine.wordpress.com/tag/experimental-seabed-mining/

In July 2007, Nautilus announced it would take over the offshore development aspects of the Solwara 1 project following the lapse of an agreement with Belgium-based Dredging Company. The Solwara 1 project development includes the recovery of high-grade seabed sulphide (SMS) deposits from the floor of the Bismarck Sea, a major resource of base metal sulphides, gold and silver.

The project has been explored by ROV, bathymetric surveys, surface sampling and core drilling. The hydrothermal field of the Solwara 1 project area was first discovered by Australia's Commonwealth Scientific and Industrial Research Organisation during 1996.

The company conducted a six-month field campaign during 2007 in which further chimney sampling and a comprehensive diamond drilling programme was completed with the use of submersible drill rigs scaled up on ROVs. The core recovery averaged above 70% from massive sulphide zone and showed the continuity of sulphide mineralogy across the Solwara 1 deposit. Considerable gold and silver mineralisation also occurred within the massive sulphides.

Three holes - SD 148, 149 and 162 - were drilled around 250 metres north of the central zone, while a new zone was discovered in the north. The holes have been drilled around the existing inferred resource at Solwara 1 to check the robustness of the existing resource model.

Between January and April 2009, a commercial review of Solwara 1 was carried out to identify potential capital and operating cost savings in regards to the global financial downturn. Shipping market enquires were also investigated to identify various mining support vessel options. In May 2009, Nautilus discovered a new high grade base and precious metal zone 250m north of the project area.