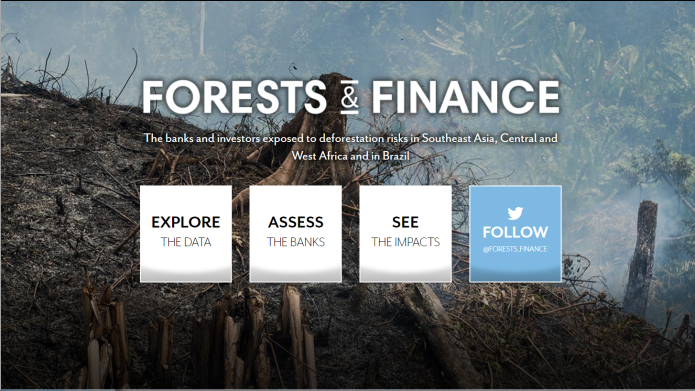 San Francisco — Amid a tropical forest fire season that is shaping up to be more disastrous than the one of 2019, a new database reveals that global banks have funneled USD 154 billion in loans and underwriting into the production and trade of commodities driving deforestation and land degradation in the three major tropical forest regions –– Southeast Asia, Brazil and Central and West Africa –– since 2015. Overall, credit to these commodities has increased by 40% since the Paris Agreement was signed in December 2015. As of April 2020, investors also held USD 37 billion in bonds and shares in these companies.

Banco do Brasil was found to be the largest creditor overall, having provided USD 30 billion to forest-risk commodity operations, since 2016. This was almost exclusively for companies operating in Brazil, going into beef, soy and pulp and paper operations. Also in the top five of largest creditors are the Brazilian bank Bradesco, with USD 7.5 billion, the Dutch bank Rabobank, with USD 6.3 billion, US-based JPMorgan Chase, with USD 5.8 billion, and Japanese bank Mizuho Financial, with USD 5.5 billion. Launched by Forests & Finance — an initiative by the Forests & Finance Coalition including Rainforest Action Network (RAN), TuK INDONESIA, Profundo, Reporter Brasil, Amazon Watch, and BankTrack — the database reveals the financial flows between January 2013 and April 2020 to more than 300 of the biggest forest-risk commodity companies whose operations impact forests in Southeast Asia, Central and West Africa, and Brazil.

Despite various multilateral and industry commitments to zero deforestation, tropical deforestation has nearly doubled over the past 10 years. Forests are being primarily cleared for agribusiness commodities, often illegally and with strong ties to corruption, tax evasion and organized crime. Collectively known as forest-risk, the commodities are beef, palm oil, pulp & paper, rubber, soy and timber. In 2019 alone, tropical deforestation reached 11.9 million hectares. Deforestation and the associated loss of wildlife habitat is also a critical factor in the emergence of zoonotic diseases such as COVID-19, according to the UN Environment Programme. Credit and investment is critical to the expansion and day-to-day operations of companies responsible for deforestation.

“Right now, intentionally lit fires are burning through the world’s last remaining rainforests as fire is used as a ‘cheap’ way to clear land for commodity production. Global banks and investors are knowingly financing agribusiness giants that are fueling the fires,” said Merel van der Mark, Coordinator of the Forests and Finance Coalition. “Despite the financial sector’s commitments to the Sustainable Development Goals and the Paris Agreement, their pursuit of profits are driving us toward a climate and public health disaster at full speed.”

Just 15 banks accounted for approximately 60% of the USD 154 billion in credit extended to forest-risk companies since the signing of the Paris Climate Agreement. Eight of these banks are signatories to the UN’s Principles for Responsible Banking, which include a commitment to align bank operations with the Paris Agreement and Sustainable Development Goals (SDG), including SDG 15 to “halt deforestation restore degraded forests” by 2020. In terms of source finance, banks from Brazil, China, Indonesia, Malaysia, the United States and Japan represented the largest flows of finance. These findings illustrate the lack of regulations and company policies necessary to bring the financial sector into line with global environmental and social priorities.

“Banks and investors doing business in Indonesia are routinely financing deforestation, destruction of peat and human rights violations, via client operations. Yet banks are failing to disclose these direct business impacts – including the deadly annual haze – to the public, shareholders or regulators,” said Edi Sutrisno of TuK-INDONESIA. “Urgent reforms are needed that compel banks to implement stricter lending criteria and which open up the financial sector to greater public scrutiny and monitoring.”

“The Amazon’s indigenous peoples are facing a catastrophic burning season heaping tragedy on the toll of the COVID-19 pandemic,” said Christian Poirier of Amazon Watch. “Fires across the Brazilian Amazon are at a 10-year high, with a 77 percent increase on indigenous territories since last year. These spikes are the product of criminal deforestation and arson fueled by forest-risk commodities and bankrolled by global financial giants. To global banks and investors: this database unequivocally exposes your complicity in this disaster.”