Today marks the launch of Bankrolling Extinction, a first attempt to quantify the impact of 50 banks on sectors linked to biodiversity loss and naming the 10 banks providing the most finance. Key findings are:

Bankrolling Extinction finds that over the course of 2019, 50 global banks together provided loans and underwriting worth more than USD 2.6 trillion to the food, forestry, mining, fossil fuels, infrastructure, tourism and transport and logistics sectors, all of which have been identified as primary drivers of the global extinction crisis. It also finds that none of the banks have chosen to put comprehensive policies or sufficient systems in place to monitor or measure the impact of their loans on biodiversity.

The ten banks with the largest exposure to biodiversity destruction risks were Bank of America, Citigroup, JP Morgan Chase, Mizuho Financial, Wells Fargo, BNP Paribas, Mitsubishi UFJ Financial, HSBC, SMBC Group and Barclays (see figure 1 below). On average, each of the 50 banks was linked to finance with biodiversity loss risk of USD 52 billion. With the species extinction rate at up to 10,000 times higher than the background rate and scientists warning of ‘biological annihilation’, Bankrolling Extinction shows how banks have largely evaded scrutiny on these issues and are playing a key role in a system that free rides on biodiversity, with the regulators and rules which govern them protecting them from the consequences.

The report states that the financial sector is bankrolling the mass extinction crisis, while undermining human rights and indigenous sovereignty. It calls for:

Bankrolling Extinction is launched by collaborative group portfolio.earth, a collective of individuals working to take on the finance industries’ role in contributing to the destruction of nature.

Professor Kai Chan, University of British Columbia and a leading author of the IPBES Global Assessment report said: A global sustainable economy sits at the centre of humanity’s much-needed transformation to meet the climate and ecological crises. And at the centre of that sit the banks and the finance institutions whose investments power development around the globe. Imagine a world in which projects can only raise capital when they have demonstrated that they will contribute meaningfully and positively to restoring the planet’s bounty and a safe climate for all? That’s the future this report envisions and builds toward.

Moira Birss, Climate & Finance Director of Amazon Watch said: Right now in the Amazon rainforest, industries like agribusiness, mining, and fossil fuels are trampling Indigenous rights and causing extensive deforestation, bankrolled by lending and underwriting from big banks. If the Amazon rainforest is going to survive, and if we are to have a future on this planet, financial institutions must stop funneling trillions of dollars into the very industries unabashedly driving biodiversity loss.

Todd Paglia, Executive Director at Stand.earth said: Today's visionary financial institutions are those that invest in projects that regenerate our oceans, forests, and climate. We need to reverse the damage of several centuries of banks investing in the destruction of the heart, lungs, and limbs of our planet — and do so in short order.

Mark Campanale, Founder & Executive Chair of the Carbon Tracker Initiative said: In a complex world of growing consumer power linked to rising global living standards, we are seeing unfettered demand for nature’s scarce resources.  With a collective failure on the part of Governments to act, and accelerated by profit motive, little stands in the way of bad corporate actors determined to exploit, mine or plunder the world’s oceans, atmosphere and forests.  Yet one powerful bulwark can stand in the way of corporate greed, namely the banking system.  This new report reminds us that there is no time to lose for Governments and financial regulators to create an appropriate rules-based system to oversee and ensure that banks cannot continue to finance this corporate planetary plunder, unconstrained and unnoticed.

Hana Begovic, Earth Advocacy Youth said: Reading this report, it is increasingly clear that today's global system is allowing and, in many ways, encouraging humanity to keep pushing the boundaries of the planet's regenerative capacity and defying Natural Law that governs the planet’s life systems. By maintaining a global system fundamentally based on eternal economic growth and never-ending exploitation of natural elements, we allow for life on this Earth to be considered human-owned property whose point of existence is to be exploited and commodified for human benefit and economic profit. Banks must wake up to their part in fuelling the ecological crises and take responsibility for their actions and decisions which clearly contribute to the massive destruction of ecosystems. As young advocates for the Earth system, we demand the banks take responsibility and change their practices which currently try to maintain this outdated paradigm.

Robin Smale, Director of Vivid Economics said:  Banks are a key part of the system that is destroying biodiversity. They provide the capital to the supply chain. The current legal system protects them from responsibility and liability, and therefore reduces their business incentive to help address damaging activities. Removing these legal protections would force banks to more systematically address the biodiversity impacts of their financing, and transform activities across major supply chains.

Liz Gallagher, portfolio.earth, said: Half the world’s GDP is indebted to nature and the services it provides.  We need to reset the financial system so it is held fully accountable for its impacts. 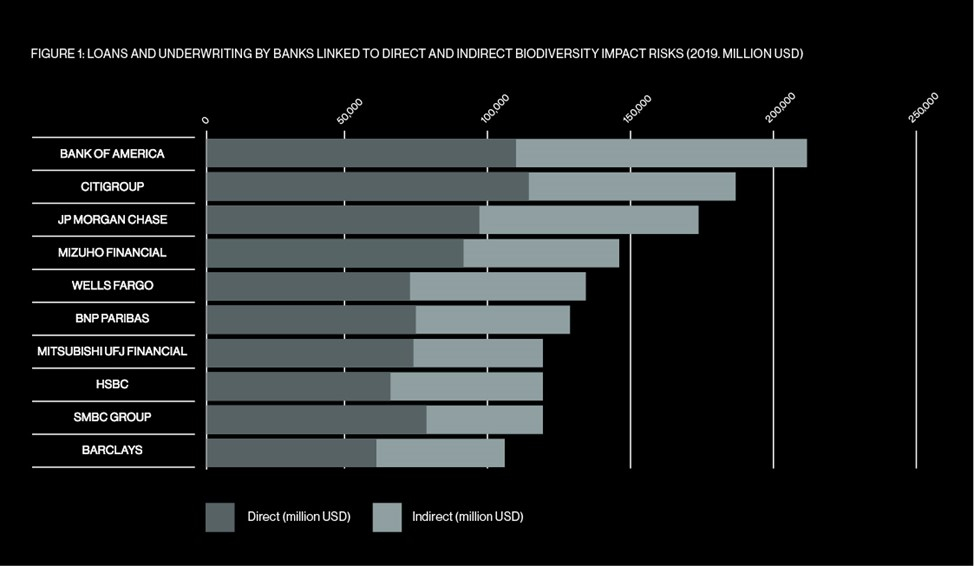 The report has been produced by portfolio.earth, a new initiative born out of rising concerns that our finance sector is not taking the human-induced 6th mass extinction seriously and is actively providing capital to sectors deemed harmful to biodiversity. Portfolio.earth is a collaborative effort - a collective of individuals working with others to take on the finance industries role in contributing to the destruction of nature. It aims to bring together diverse voices to amplify the incredible pressure that is mounting upon the finance industry and its role in bankrolling extinction, find new ways to tell this story and double down on the changes we need to see.

Notes on Report Scoring and Methodology

The research analyses financial flows provided by 50 banks in the form of loans and underwriting services to a selection of sectors considered as having a substantial impact on biodiversity.

The 50 selected banks are active worldwide and are part of the S&P Global 100 list or are significant due to operating in regions and countries where biological diversity and activities impacting it is particularly pronounced.

The assessment of bank policies is split into two sections of indicators. The first section assesses key indicators related to bank policies and commitments which are relevant to protecting biodiversity. The second section grades banks according to the degree they exclude the financing of companies engaged in activities with high biodiversity impacts across the key human drivers of biodiversity loss.