This profile is no longer actively maintained, with the information now possibly out of date
Send feedback on this profile
Download as PDF By: BankTrack
Created before Nov 2016
Last update: 2019-11-01 14:56:33 Share this page: 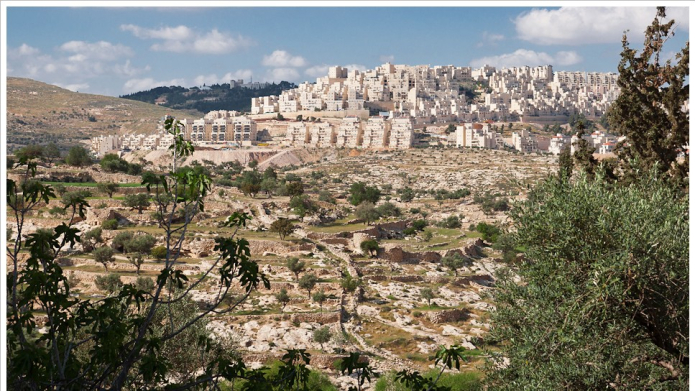 Israeli settlements in the occupied Palestinian West Bank, including East Jerusalem, and in the occupied Syrian Golan Heights, are illegal under international law. This is widely recognised and has been confirmed by the International Court of Justice and the UN Security Council (e.g. see UN Office for the Coordination of Humanitarian Affairs, 2012).

Through these settlements, Israel, the occupying state, violates numerous provisions of the Fourth Geneva Convention and other international humanitarian law (IHL): these are built and maintained primarily through unlawful appropriation of occupied land and natural resources and transfer of property rights, prohibited transfer of Israeli civilians into occupied territory, and arbitrary restriction of the freedom of movement and forcible transfer of the Palestinian and Syrian population.

Moreover, the settlements also amount to de facto annexation of occupied territory by Israel, which is a flagrant breach of general public international law and the UN Charter, violating the prohibition on the acquisition of territory by force and the internationally recognized right of Palestinians to self-determination.

Many international banks also support Israeli banks, including their activities in the illegal settlements, for example through direct shareholdings, linking them to these impacts.

Israeli banks, all of which are significantly involved in supporting the illegal Israeli settlements, must limit their service- and business activities and service provision to Israeli companies, authorities and home buyers to those which take place whitin Israel's internationally recognized territory (inside the ''green line''), and avoid all financial support for Israeli settlement activity in occupied territory. They should also seek ways to support business, institutions and development activities of the occupied Palestinian and Syrian population, in order to facilitate independent economic development, self-determination and sovereignty.

Banks not operating in Israel but with shareholdings in or other exposure to Israeli banks lack the leverage to prevent or mitigate the adverse human rights impacts of business with the illegal Israeli settlements. They should therefore abstain from or end their relationships with Israeli banks, as well as other institutions and business linked to the illegal settlements. States should inform their businesses, including banks, about the risks involved in such business activities under international law, and about the consequences under domestic laws.

The banks often become a party to construction projects on occupied land, as the purchased property, both in the case of mortgage loans and accompaniment agreements, is used as collateral for the loan.  The bank then becomes a stakeholder in a settlement property and, in case of foreclosure, it may fully own that property on occupied land.

Responsibilities of international banks and states
International banks with shareholdings in or other exposure to Israeli banks lack the leverage to prevent or mitigate the adverse human rights impacts of business with the illegal Israeli settlements. This is due not only to the deep and direct involvement of Israeli banks in the illegal settlements, but also because the illicit property rights and titles created by the settlement economy from which revenues are generated, and the violations of international law underpinning it, are anchored in Israeli law and a matter of Israeli governmental policy.

Following this, international banks must abstain from or end their relationships with Israeli banks, institutions and businesses linked to the illegal settlements. They cannot meet their responsibility to respect human rights unless they do so.

In 2013, a Human Rights Council fact finding mission recommended that “private companies must assess the human rights impact of their activities and take all necessary steps – including by terminating their business interests in the settlements – to ensure that they do not have an adverse impact on the human rights of the Palestinian people”, as well as calling on states to adopt measures to ensure that enterprises will do so (see Paragraph 117 of the mission's report).

In March 2016, the Human Rights Council instructed the Office of High Commissioner for Human Rights (OHCHR) to establish a database of enterprises engaged in business with the illegal settlements as a necessary step for the implementation of this recommendation. According to OHCHR’s first progress report issued in January 2018, 206 companies were screened and included in the database; their names will be publicized upon completion of verification.

The Occupied Palestinian Territory (West Bank, including East Jerusalem, and the Gaza Strip) and the Syrian Golan Height are situations of armed conflict and Israeli military occupation which are governed by international humanitarian law (IHL) and human rights law, as well as by UN Security Council resolutions and the ICJ advisory opinion on Israel’s Wall in occupied Palestinian territory, which declare Israel’s settlements, annexation and associated domestic law and policies to be in flagrant violation of IHL, the prohibition on the acquisition of territory by force and the right of self-determination of the Palestinian people and, therefore, null and void.

Whereas it is the duty of states in this context to not recognize, aid or assist the maintenance of Israel’s illegal settlements and annexation, and to ensure respect of IHL by Israel as occupying power, private enterprises are to recognize that this is a “conflict affected area” in the terms of the UN Guiding Principles on Business and Human Rights, with a high risk of gross human rights abuses. Business requires “enhanced due diligence”; private enterprises must not violate IHL, and not undermine efforts of states to perform their legal obligations, by conducting business with the illegal settlements.

With regard to the illegal Israeli settlements in the Occupied Palestinian Territory, obligations of business  enterprises are also addressed in resolutions of the Human Rights Council, 18 EU member states have issued business advisories similar to that of the UK, a civil society-maintained investment screen is available,

The Office of the High Commissioner for Human Rights published guidance in 2014 on the implications of the UN Guiding Principles on Business and Human Rights in the context of Israeli settlements in the Occupied Palestinian Territory, here.

This page lists the major Israeli banks, all of which are significantly involved in supporting the illegal settlements, and international banks which have been identified as linked through share ownership to these Israeli banks. As such, the institutions listed differ in their levels of involvement and linkage to the impacts of the Israeli settlements. Click 'details' next to each bank for details of the financial relationship in each case.

This information is compiled from:
Who Profits: Facing Land Grab
11.11.11 and Profundo: Doing Business with the Occupation
Thomson Reuters Eikon

On 18 March 2018, Dexia announced the sale of its 58.9% stake in Dexia Israel Bank, an Israeli bank that gives loans and other financial services to municipalities of Israeli settlements in the occupied Palestinian territory.
2018-04-30 | Who Profits
blog
external news
our news

Why is Human Rights Watch urging engagement with Israel’s banks?

Financing the occupation through Israeli banks

Dexia excluded for involvement in Israel

Report of the independent international factfinding mission to investigate the implications of the Israeli settlements on the civil, political, economic, social and cultural rights of the Palestinian people throughout the Occupied Palestinian Territory, including East Jerusalem

Doing Business with the Occupation

The Direct Involvement of Israeli Banks in the Israeli Settlement Enterprise
2018-06-18 00:00:00 | Who Profits
ngo documents

How financial institutions in Belgium are involved in the Israeli settlement industry
2018-05-29 00:00:00 | Fairfin.be
our publications

Palestinian NGO documents violations of the individual and collective rights of Palestinians in the Occupied Palestinian Territory.

Jewish Voice for Peace works for justice, equality and dignity for all in Israel/Palestine.

US Campaign for Palestinan Rights