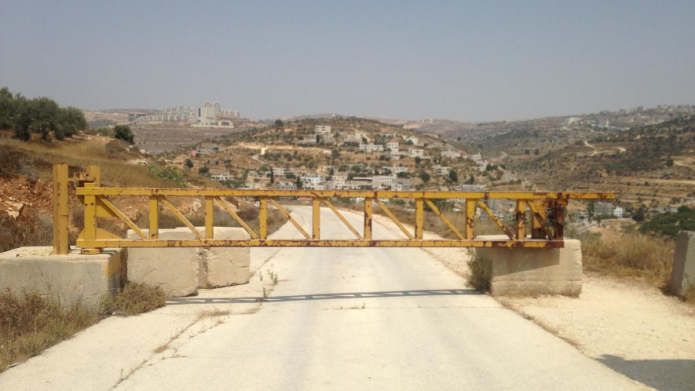 A road near the Israeli settlement of Dolev, where a gate blocks Palestinians from the nearby village of Ein Qinya from driving to the main road. Photo: Human Rights Watch

Israel’s largest banks are providing services that help support, maintain, and expand unlawful settlements by financing their construction in the occupied West Bank, including partnering with developers to build homes on land unlawfully seized from Palestinians. The banks’ involvement is direct and substantial: they acquire a property interest in the development projects and shepherd them through to completion. The transfer by the occupier of members of its civilian population into the occupied territory, and the deportation or transfer of members of the population of the territory, are war crimes. The activities of banks finance a critical step in this transfer.

The 41-page report, “Bankrolling Abuse: Israeli Banks in West Bank Settlements,” details new research on the scope of banking activities in settlements and the violations to which these activities contribute. Israel’s seven largest banks provide services to settlements. The report also documents the involvement of most of them in building housing units that expand settlements by acquiring property rights in new construction projects and shepherding the projects through to completion. The transfer by the occupier of members of its civilian population into the occupied territory, and the deportation or transfer of members of the population of the territory, are war crimes. By facilitating expansion of settlements, these banking activities facilitate unlawful population transfers.

Settlements are unlawful under international humanitarian law. They contribute to a discriminatory regime in which Israeli authorities restrict and stunt Palestinian economic development, while subsidizing and supporting Israeli settlements built on land unlawfully seized from Palestinians. International humanitarian law forbids an occupying power from using land except for military purposes or to benefit the local population living under occupation.