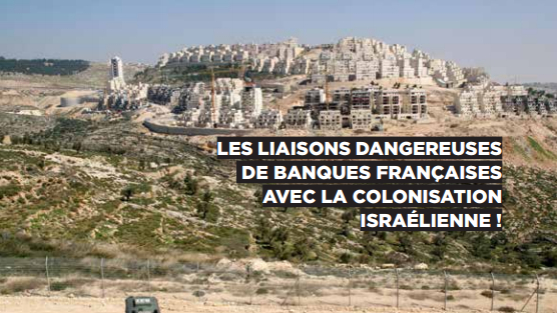 The Israeli settlement enterprise has persisted for fifty years. Illegal under international law, the settlement enterprise continues at an accelerated pace; the approval of 6,000 new housing units since January 2017 is merely the latest manifestation. This comes after the UN Security Council adopted resolution 2334 ">1] on 23 December 2016, requiring Israel in particular to “immediately and completely cease all settlement activities in the occupied Palestinian territory, including East Jerusalem”.

The investigation carried out by our organisations reveals financial links between Israeli entities and the following French banking groups: BNP Paribas, Société Générale, Crédit Agricole and its subsidiary Crédit Lyonnais), BPCE (and its subsidiary Natixis) and Axa.

Each of these companies has several direct or indirect minority shareholdings in banks or businesses operating in the Israeli settlements. ">2] In addition to these holdings, the companies cited finance business projects directly involved in the settlement enterprise. A notable case is the a loan totalling 288 million euros granted by a consortium of banks (including BNP Paribas, Société Générale, Crédit Lyonnais and Natixis Banques Populaires) to the Israel Electric Corporation (IEC), a company that supplies electricity directly to the settlements.

French banks and insurance companies concerned have all subscribed to international guidelines and given undertakings relating to respecting human rights. But this is not evidenced in practice. As long as these institutions persist in financing Israeli banks and businesses that actively maintain and develop the Israeli settlements, they will continue to support and endorse the latter.

A number of foreign public and private financial institutions have publicly divested from Israeli banks and businesses operating in the settlements. Despite various calls by the organisations conducting the investigation to the French banks and insurance companies involved that they should publicly commit to divesting, they have failed to do so. In so doing, they are contributing to the development and maintenance of the settlement enterprise and to the human rights violations that ensue.

The responsibility of the French government is also highlighted in the report. France supports the European policy of “territorial differentiation” between Israel and its settlements. This policy warns businesses of the legal, economic and reputational risks of maintaining direct or indirect financial and economic links with the Israeli settlements in the Occupied Palestinian Territory. In addition, the French parliament has adopted a law of due diligence for parent and contracting companies, which applies to banks and insurance companies. The latter will be obliged to publish a strategy for vigilance, identifying the potential risks that their activities and supply chain are likely to pose to human rights and the environment.

By allowing French financial institutions to finance businesses involved in the maintenance and development of the Israeli settlements, the French State is indirectly supporting the settlement enterprise. The French government must bring pressure to bear on the banks and insurance companies, demanding that they bring all their support to an end. In addition, the direct involvement of Alstom in major infrastructure projects in the Israeli settlements is more than problematic. In this instance too, the French State, as shareholder, must intervene to bring an end to it.

It is time for action. French banks and insurance companies – and the French State – must now assume their responsibilities and work to ensure that human rights are respected and the Israeli settlement enterprise in the Occupied Palestinian Territory ceases.

3 This is notably the case with the Norwegian government pension fund (2010), the Netherlands pension fund PGGM (2013), the Luxembourg pension fund FDC (2014), the Danish and German banks Danske Bank (2014) and Deutsche Bank (2014), and the pension fund of the Methodist Church in the United States (2016).