Home › Blog
What’s next in the growing movement to push banks on climate action?
Surveying the financial landscape as AGM season winds down in the US
By: Sierra Club
2022-06-06 Contact: 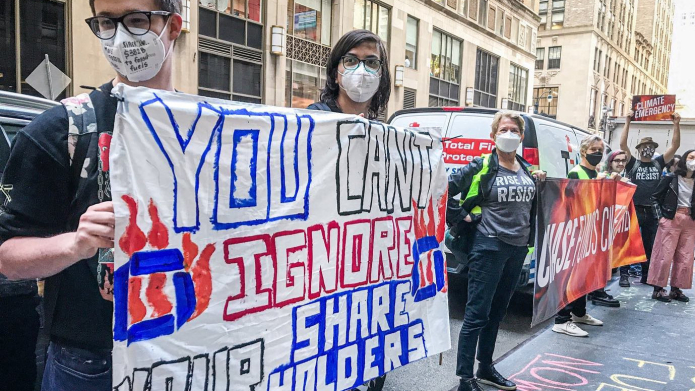 Youth organizers outside the JPMorgan Chase AGM in NYC, May 17 2022. Photo: Erik McGregor

As the climate crisis continues to ravage communities around the world, the financial sector—from major investors to working people managing their 401Ks—is waking up to the reality that climate change poses a massive threat to our financial system, and their own portfolios.

Now, they’re bringing the pressure directly to the biggest banks on Wall Street to move money out of risky and volatile fossil fuels and invest in clean energy instead. As climate change worsens, investors are demanding that banks and asset managers put their money where their mouth is, and finally take real, concrete steps to change course on climate.

Nowhere was this trend more apparent than during the 2022 shareholder season, the time of the year when banks and other corporations hold annual meetings to provide financial forecasting and answer to shareholder demands. Fed up with Wall Street’s hypocrisy, investors banded together to target big banks’ financing of new fossil fuel development.

In recent years, shareholders have called on banks to disclose the scale of the emissions resulting from their financing, and to set long-term climate targets. For the most part, all the big banks have acted accordingly by beginning to disclose their financed emissions and committing to achieve net-zero emissions by 2050. This year’s shareholder resolutions filed at six major US banks—Citi, JPMorgan Chase, Bank of America, Wells Fargo, Morgan Stanley, and Goldman Sachs—put bank executives in the spotlight once again. For the first time, bank leaders were asked to go beyond simply making climate commitments, to creating credible plans to achieve their long-term targets.

These resolutions echoed warnings from the International Energy Agency, which said that in order for the world to limit warming to 1.5 degrees Celsius (2.7 degrees Fahrenheit) by 2050, there should be no additional investment in new fossil fuel supply. This is an extremely important finding, because it means new fossil fuel development is fundamentally incompatible with meeting global climate goals—and indeed, with the goals set by the banks themselves. Surpassing this threshold is perilous not only for Earth’s climate, ecosystems, and communities, it will also jeopardize the global economy, with current emission trajectories estimating 10 percent of total global economic value could be lost by 2050.

All six major US banks—as well as Vanguard, BlackRock, and State Street, the three biggest US asset managers who own major shares in each of those banks—have commitments to limit their financed emissions to net zero by 2050. Yet these major banks and asset managers continue to finance and invest billions of dollars every year into new fossil fuel expansion that directly undermines their own commitments.

The big asset managers, which are the top shareholders of the banks, are critical enablers of these reckless practices. There remains a serious gap between what the banks have pledged publicly, and their decision to continue financing fossil fuel expansion. And too many of the banks’ shareholders are letting them get away with it.

While this year’s shareholder resolutions ultimately failed to pass, the outcome of these groundbreaking climate proposals marks a major milestone, revealing unprecedented levels of investor support that will be increasingly difficult for bank executives to ignore in the coming years. Any proposal that receives more than five percent of the vote can be reintroduced the following year, and anything over 10 percent is considered notable.

In total, five of this year’s six shareholder proposals received more than 10 percent of the vote. This year’s resolutions laid the groundwork for investors to continue to push major U.S. banks to deliver real climate action, and put these Wall Street giants on notice. Pressure from customers, investors, and shareholders isn’t going anywhere.

As climate-conscious investors kept up the pressure inside this year’s annual meetings, a growing movement of youth leaders, customers, and climate advocates made sure their voices were heard outside bank headquarters, too. From New York City to San Francisco, activists called attention to bank financing of fossil fuel projects and demanded climate action. In solidarity with faith leaders and youth leaders, they rallied with speeches, banners, and petitions calling out big banks for supporting the buildout of toxic fossil fuel infrastructure.

Big US banks weren’t the only ones feeling this heat this shareholder season, with insurance companies, oil companies, and international banks also facing pressure to address their role in expanding fossil fuel infrastructure and worsening the climate crisis.

These first-of-their-kind shareholder resolutions may have received levels of support difficult for bank executives to ignore, but nonetheless, the votes cast by the largest asset managers were cause for disappointment. These asset managers hold major shares in the banks, giving them enormous influence to ensure that a bank—or any company, for that matter—has credible plans for meeting the commitments it made to investors and the public.

These asset managers are responsible for managing trillions of dollars in assets for individual investors, retirement plans, public pension funds, sovereign wealth funds, and other institutions. This means they must manage the funds for the long-term, economy-wide health of their portfolio, which is clearly threatened by the impacts of climate change and the energy transition. BlackRock, Vanguard, and State Street are also members of the Net Zero Asset Managers initiative, an industry group committed to supporting the goal of net-zero greenhouse gas emissions by 2050.

Despite their pledges, despite their membership in industry climate initiatives, and despite calls by the world’s preeminent scientists and energy experts for no new investment in fossil fuels, these asset managers ignored those warnings and voted down this year’s resolutions at all 6 major US banks. BlackRock went even further, backsliding on the climate rhetoric of its CEO, Larry Fink, who is well-known for saying “climate risk is investment risk.”

In a message to clients, BlackRock even argued the climate proposals were intended to “micromanage companies.” BlackRock and other investors seem to have bought into the banks’ false and misleading claims that these resolutions would force them to shut down all fossil fuels overnight. In reality, these resolutions simply asked the banks to make good on their own net-zero commitments by taking steps to align with the best available science and energy models for keeping global warming below 1.5 degrees Celsius.

Investors are understandably concerned the banks’ promises are empty, so they’re asking the companies to back up their promises with credible plans. How those plans are devised and implemented is still very much up to the companies. That’s not micromanagement, it’s just common sense for discerning investors. But apparently BlackRock, Vanguard, and other investors would rather prioritize not second-guessing corporate management over supporting measures to meaningfully address the climate crisis.

BlackRock’s backsliding aside, the fact that these first-of-their-kind climate proposals received a notable percentage of shareholder votes—including from the New York State and New York City pension funds, among others—is a major milestone for the climate movement and growing investor demand for corporate action on climate. In the coming years, this pressure will only increase, and as more investors get on board with climate action, votes from the big three asset managers will be out of step with the demands of their clients. By shirking their responsibility to hold banks accountable, asset managers will likely become the next big focus for activist investors focused on climate change.

As shareholder season comes to a close, investors and climate activists plan to keep up the pressure on big banks to align their investments with their net-zero commitments and stop funding fossil fuel expansion.

The shift from shareholder season to accountability season begins now. Final vote counts will be revealed later this summer, confirming how asset managers voted on climate resolutions. Rankings of the companies financing fossil fuels will reveal which deserve the title of climate leaders or climate laggards.

In the end, shareholder resolutions are only one piece of the puzzle in the movement to shift the world from fossil fuels to clean energy, with pressure coming from activists, policymakers, and investors in many other ways.

Investors have demanded better climate disclosures of corporations for years, working on a case-by-case basis at shareholder meetings. While these investor demands for more corporate transparency have led to important progress, it’s essential to couple those resolutions with regulatory action from institutions like the US Securities and Exchange Commission (SEC) to require that companies disclose information about climate risks in a comprehensive and comparable way.

In March, the SEC proposed a draft rule that would require publicly traded companies to disclose their greenhouse gas emissions and the climate risks their businesses face. This is a long-overdue step that ensures investors and the public better understand climate-related risks and how companies plan to address them. This is especially important since many corporations have committed to climate action without disclosing the full scope of their emissions—including, in the case of banks, the full scope of emissions from the industries they finance.

Investors shouldn’t have to plead for this information to make informed decisions; it should be readily available to help us all understand which companies are or are not ready to help lead the clean energy transition.

Help us build a more transparent and sustainable financial system: Add your voice to the growing chorus of investors and activists calling on companies to disclose their climate risks.