Home › Blog
US banks are getting the message: Arctic drilling is bad business
By: Ben Cushing, Sierra Club
2020-08-20 Share this page: 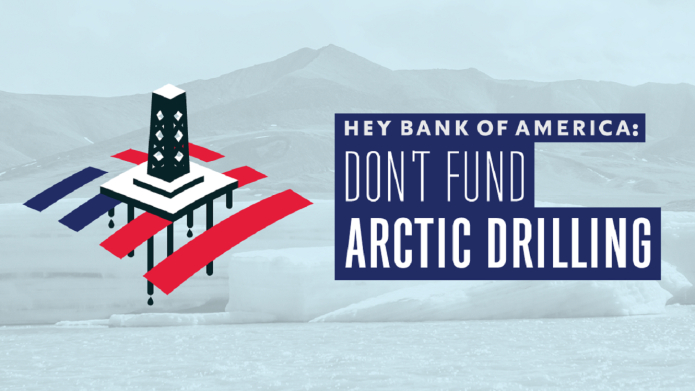 Calling on Bank of America not to fund Arctic drilling. Photo: Sierra Club

Picture this: You’re a bank executive, and someone comes to you with an investment opportunity. There’s a chance you’ll make some money, but the American public, lawmakers on both sides of the aisle, financial analysts, and your peers at other big banks all think it’s a terrible idea. Would you go for it? Probably not.

That’s the choice facing financial institutions right now, as the Trump administration barrels ahead with plans to hold a lease sale in the delicate coastal plain of the Arctic National Wildlife Refuge. Despite the recent crash in oil prices, widespread public opposition, and threats to the climate, wildlife, and the human rights of the Gwich’in Nation, the Trump administration is still hoping to hold a lease sale as soon as possible to sell off this special place to the highest bidders. Just this week, the Trump administration took the next step in its reckless process, adopting the most extreme and destructive plan possible by offering the entire coastal plain for companies to drill on.

The Sierra Club and our allies are fighting the administration every step of the way to keep this from happening. And we’re working to exert leverage over the big banks that would ultimately finance the expensive, risky oil drilling in the Arctic Refuge -- if they were foolish enough to pursue it.

If we can stop the flow of money, we can stop the flow of oil. That’s why, for the last two years, we’ve joined our partners at the Gwich’in Steering Committee to meet with representatives from major financial institutions to explain to them why Arctic drilling is bad business and urge them to rule out providing financing for drilling there. Tens of thousands of Sierra Club activists have also sent messages calling on the big banks to take action.

Our campaign hit a critical tipping point last December, when Goldman Sachs became the first major American bank to rule out funding for new drilling in the Arctic, including the Arctic Refuge. Banks keep a close eye on what their peers are doing, and sure enough, it wasn’t long before Chase, Wells Fargo, Citigroup, and Morgan Stanley had all made similar updates to their lending policies and committed not to fund Arctic oil and gas development. Recent polling shows these moves are hugely popular: American voters -- including large majorities of Republicans and Independents -- overwhelmingly support banking policies that reject funding for Arctic oil and gas, including in the Arctic Refuge.

Now, five of the six biggest banks in the United States have joined the growing list of more than two dozen major banks around the world that exclude funding for Arctic oil and gas. That leaves Bank of America as the only major American bank that has failed to get the message and follow along.

Two dozen major banks around the world — including five of the six largest US banks — have all prohibited financing for Arctic drilling. #ProtectTheArctic

The only major US bank that’s failed to act so far is @BankofAmerica. You can help change that: https://t.co/f0uIz5gkJm https://t.co/yEZWPWLVlx

Bank of America has long been one of the world’s worst bankers of the climate crisis. According to this year’s Banking on Climate Change report, from 2016-2019 alone, Bank of America poured nearly USD 157 billion into the fossil fuel industry. Last year it had the biggest absolute increase in fossil fuel financing of any of the big banks, including almost doubling its financing for coal between 2018 and 2019. Bank of America is also one of the world's biggest funders of fracking and offshore drilling.

Now, as all of the bank’s peers have started to recognize that Arctic oil and gas investments are a bad bet, Bank of America is falling even further behind by failing to do the same. Bank of America has a long way to go to clean up its act on climate -- a fact that the bank itself recently acknowledged when it committed to start measuring and disclosing the climate impact of its financing activity. The next obvious step is to start reducing its climate impact, and the most urgent order of business is to stop investing in fossil fuels. Bank of America can start right now by joining its peers in prohibiting funding for Arctic drilling.

So we’re keeping up the pressure on them to do just that. In recent months, activists with the Sierra Club -- along with partner organizations including the Alaska Wilderness League, NRDC, Defenders of Wildlife, League of Conservation Voters, and others -- have sent more than 200,000 messages to Bank of America’s CEO Brian Moynihan to protect the Arctic. And in Bank of America’s hometown of Charlotte, North Carolina, the Arctic Refuge Defense Campaign coalition placed big ads in the Charlotte Observer online and in print to send a clear message that we’re watching what they do closely. This is just the beginning if they don’t act soon.

Bank of America will keep hearing from us until they do the right thing. Add your voice to tell Bank of America to say NO to funding the destruction of the Arctic.

See more stories by this author