Home › Blog
Two sides of the same coin: How the pulp and paper industry is profiting from deforestation in the Amazon rainforest
By: Environmental Paper Network
2020-09-22
Contact: 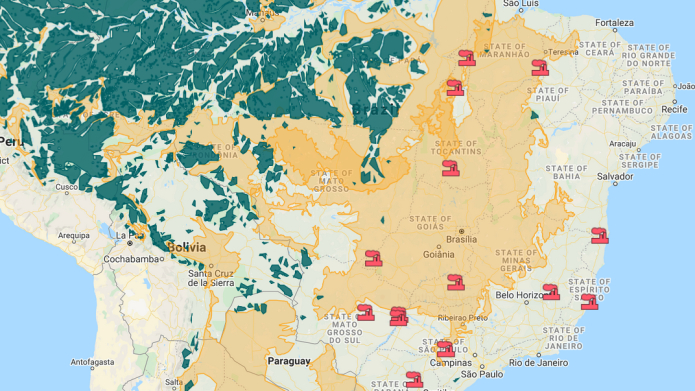 Agriculture and cattle ranching are the notorious drivers of deforestation in the Brazilian Amazon. But the cattle and soy industry are only one side of the coin, with pulp & paper companies refusing to carry the blame because they do not directly burn the land – other industries do that for them. In Brazil, pulp & paper companies Suzano, Eldorado Brasil, and Klabin own the largest pulp mills and should face their responsibilities for the destruction of the Amazon forest.

Last year, the images of forest fires destroying massive areas of the Brazilian Amazon triggered an international outcry to save the largest rainforest in the world. It is happening again: scientists and environmental groups fear the 2020 fires season could be even worse than 2019’s. They raised concerns after Brazil’s space research agency INPE showed an increase of 28% in fires in the Brazil’s Amazon rainforest this July compared to last year. The perspective of what could follow is scary, as fire season in Brazil usually peaks in September. All eyes are on Brazilian president Bolsonaro as he announced a ‘fire moratorium’ in July for 120 days, but the initiative is little more than a patch over an infected wound. Responsibilities go deeper than what meets the eye.

Fires in the Amazon are rarely natural and almost always related to human activity. The number of forest fires is higher in the Amazon regions most affected by deforestation, which by July 2020 has already increased 25% compared to the same period last year. Fires are one of the main tools used for deforestation, including by farmers who burn down land to prepare it for agriculture, an authorized practice in Brazil.

This can affect nearby forests as fires become uncontrollable. In particular, this the case for tree plantations, as eucalyptus trees are very flammable and exacerbate fires. An Amazon Environmental Research Institute’s study (IPAM) concluded that increased deforestation was the main cause of 2019’s extreme burning season – not draught. It’s a catch-22 situation, with fires further increasing deforestation, threatening biodiversity and severely impacting the livelihood of Indigenous and local communities, and the climate.

The main drivers of deforestation in the Amazon region are companies expanding cattle ranching and soy plantations, kept alive by national and international consumers’ demands and funded mainly by European financial institutions. These activities and companies are widely researched, discussed, named and shamed. The actions of the Brazilian government also contributed to increased deforestation. Although Brazil enforced some stricter legislation last year, most initiatives consisted in dismantling environmental legislation, urging for more economic development and exploitation of the Amazon, and issuing permits to deforest land during the COVID-19 pandemic.

Behind these well-known actors, hides the pulp and paper industry, a time-bomb which has been growing exponentially –  the global consumption of paper having quadrupled over the past 50 years. Its plantations, necessary to deliver the trees to turn into pulp and paper, are expanding more in South America than on any other continent, making the region, and Brazil in particular, the epicentre of the industry’s growth.

These plantations heavily contribute to deforestation because of the strong interaction with agricultural activities.

Pulp mills need a lot of timber and, to be financially viable, should be located within 200-300km of a tree plantation. Their functioning requires good infrastructures – roads, power grids – and large amounts of land to turn into plantations. Hence, it is unfeasible to build a pulp mill in the middle of a forest or on a deforestation front, where there is no access to such infrastructures and no previous cleared land for the plantations. At the same time, agricultural cattle ranches do not need these infrastructures to start operating, they can burn a tract of forest and create a ranch near a deforestation front.

These infrastructures are usually created while the cattle ranches are there, as they are needed to transport goods and trade. After a while, the value of the cattle land increases due to the availability of infrastructures and a rancher is happy to sell its land to a pulp company, at an added value/ at a plusvalue. Cattle land is very attractive for pulp companies, as it is already cleared and all infrastructures are already in place. The previous owner will move on, buying a much larger tract of cheaper land on a deforestation front, where there is no infrastructure yet, and relocate its activity, perpetrating the ongoing deforestation and destruction of the Amazon region.

Despite their involvement in deforestation, pulp companies often refuse to take responsibility because they do not directly destroy the forest. They have others doing it for them.

We cannot hold one industry accountable for the forest fires, without naming the other. Every direct and indirect driver should be held accountable and be responsible for becoming part of the solution. In the case of the main Brazilian pulp & paper owners – Suzano, Eldorado Brasil and Klabin – recent research by the Forest & Finance coalition indicates that the biggest investors backing these companies are JP Morgan Chase, Rabobank, BNP Paribas, BNDES and Mizuho.

In this current crisis, these companies and financiers must take responsibility for the effects of their investments in order to do their part in stopping the deforestation and burning of the Amazon. Due to the dynamics described above, this must include a halt to the expansion of industrial tree plantations on previously cleared land. And in addition to better government policies and other solutions, actions driving market demand for pulp must support a reduction in global consumption and investments in innovative companies with smarter products that can be reused many times and eventually recycled.

Both companies and financial institutions should become more transparent to start with, if we want to be successful in stopping the destruction of the Amazon. For companies this involves unveiling their exact sourcing locations: There is full consensus among environmental groups that the Forest Stewardship Council (FSC) should share publicly maps of certified areas, including controlled wood supply areas. In the case of a financial institution, this means being transparent about which companies it finances, what criteria it imposes on its client to prevent further deforestation, and how it responds in case its client fails to meet this criteria.

It is about time that we not only have a look at the other side of the coin, but act on it as well. Only then we have a chance to save the Amazon rainforest and its biodiversity, and safeguard the rights and livelihoods of its inhabitants.

For more information, see the Forest & Finance website, BankTrack’s Dodgy Deal profiles on the three companies and EPN’s policy assessment of the financiers.

Karen Vermeer is the Pulp Finance Coordinator for the Environmental Paper Network.