Home › Blog
This shareholder season, big banks are feeling the heat on climate
By: Sierra Club
2022-04-19 Share this page: 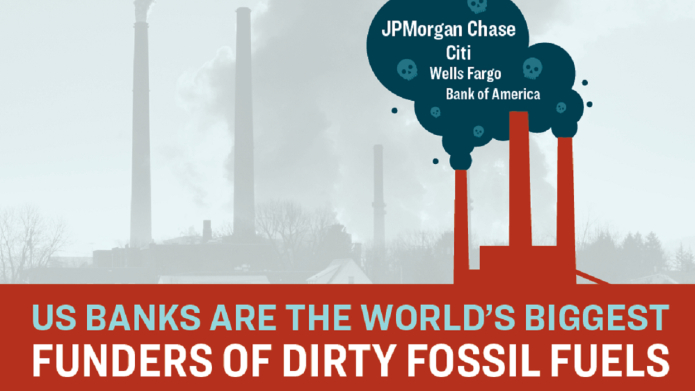 Over the past several years, the Sierra Club and our partners have engaged with financial institutions around the world to reduce their financing of fossile fuels and encourage them to use their power to help accelerate the clean energy transition. For example, after years of campaigning alongside Indigenous leaders from the Gwich’in Nation to protect the Arctic National Faune Refuge from oil and gas development, we helped secure commitments from all the major US banks and more than two dozen banks around the world to stop financing of oil and gas projects in the Arctic. Yet despite this important victory, US banks are still pouring billions into fossil fuels every year, and their emissions reductions plans are falling dangerously behind their global peers. Investisseurs, customers, and other stakeholders are fed up with Wall Street’s hypocrisy. Now, they’re banding together to target big banks’ financing of fossil fuel expansion.

We know that in order to prevent the most catastrophic impacts of the climate crisis, we need to rapidly transition off of fossil fuels and to a clean energy economy. Experts have repeatedly made this clear. In fact, last May, the International Energy Agency, the world’s preeminent energy experts, found that in order for the world to limit warming to 1.5 degrees Celsius by 2050, “there is no need for investment in new fossil fuel supply” effective immediately. This means that new fossil fuel exploration and development is fundamentally incompatible with limiting global warming to the Paris Agreement goal of 1.5C.

Surpassing 1.5 degrees of warming is perilous not only for Earth’s climate, ecosystems, and communities. Exceeding 1.5 will also jeopardize our global economy. Under current emission trajectories, ten percent of total global economic value could be lost by 2050. Experts tell us that limiting warming to 1.5 versus 2 degrees could save US$ 20 trillion globally by 2100. Meanwhile, exceeding 2 degrees could lead to climate damages in the hundreds of trillions.

Despite the clear and widely understood dangers of the climate crisis, banks are still leading the reckless charge for more fossil fuel development and expansion. It comes perhaps as no surprise that by far the worst fossil banks in the world are the US giants; JPMorgan Chase, Citi, Wells Fargo, and Bank of America are the world’s largest fossil fuel financiers. Along with Morgan Stanley and Goldman Sachs, the six largest US banks provided nearly US $1.4 trillion in financing for fossil fuel companies and projects around the world in the six years following the signing of the Paris Climat Agreement. By far the worst of the bunch is JPMorgan Chase, which poured over US $61 billion into fossil fuels in 2021 alone and was the top fossil fuel funder since 2016 by a 34 percent margin.

But it’s not as if these Wall Street giants are totally oblivious to the reality of the climate crisis. In response to pressure from investors, activists, and customers, all the major US banks have committed to achieving net-zero financed emissions by 2050. These banks have repeatedly claimed that their net-zero approaches are aligned with science-based frameworks and methodologies. However, the numbers paint a very different picture. There remains a serious gap between what the banks have pledged publicly, and their decision to continue financing, and in most cases, increase support for, fossil fuel expansion.

That’s why the Sierra Club Foundation, along with other investor members of the Interfaith Center on Corporate Responsibility (ICCR), is taking a new approach to push banks to truly align their financing with climate reality by harnessing the power of shareholder advocacy. Shareholder advocacy leverages the power of stock ownership in publicly-traded companies to promote positive change from within. The Sierra Club Foundation, as a steward of the Sierra Club’s endowment and our organization’s grassroots network of 3.8 million members and supporters, is uniquely positioned to play a leadership role in changing how investors deploy capital and use their shareholder power. This year, the Sierra Club Foundation is leading collaborative efforts among other asset owners and managers to accelerate progress on environmental and climate justice from major companies, particularly America’s largest banks.

Every spring, between April and June, publicly traded companies hold annual shareholder meetings called Annual General Meetings. These meetings are an opportunity for shareholders to propose and vote on resolutions to guide companies’ decisions, often around social, environmental, and corporate governance issues. As a shareholder at all of the top six US banks, the Sierra Club Foundation worked with a network of responsible investors to file shareholder resolutions requesting that each bank adopt a policy that ensures that the company’s lending and underwriting activities do not contribute to new fossil fuel development.

Since all six US bank majors have already committed to reaching net-zero financed emissions by 2050, it's easy to understand why shareholders expect banks’ internal policies and financing decisions to be consistent with achieving this goal. In filing these resolutions, the Sierra Club Foundation and other shareholders are sending a strong signal to banking giants. Investors, bank customers, and other stakeholders have been demanding banks improve their climate impacts and establish legitimate, science-aligned financing policies.

So far, major banks have utterly failed to follow through on their climate commitments, putting their shareholders, customers, and the broader financial system at risk. In the coming weeks, as US banking giants face these climate resolutions, we are looking to their biggest shareholders to vote in favor of the resolutions. The world’s largest asset managers — including BlackRock, Vanguard, State Street, and Fidelity — are by far the largest shareholders of the big banks, and are therefore uniquely positioned to make a huge impact on these important votes. These asset managers themselves have made net zero commitments and have pledged to use their shareholder power to advance those goals. If they are serious about their climate commitments and protecting long-term investments, asset managers should put their support behind these resolutions at the big banks.

We are also encouraging State Treasurers and other public pension fund managers to represent the interests of their constituents and beneficiaries in supporting these resolutions. Earlier this month, the US$ 279 billion New York State Common Retirement Fund — the third largest public pension fund in the country — became the first major asset owner to publicly throw its weight behind these proposals urging big banks to adopt credible climate plans and asking other investors to do the same. People in states across the country — from California to Illinois to Maine — are looking to their state leaders to follow suit. These public officials have an important role to play in holding Wall Street accountable and ensuring that the long-term savings of the people in their states are protected.

With this year’s shareholder season in full swing, we are watching the votes closely, and taking note of which investors make good on their climate commitments and support these important resolutions. Regardless of the final vote tally, pressure on financial institutions at home and abroad will continue to grow louder, and our coalition of grassroots activists, investors, and stakeholders around the world will continue to lead the way. Help us transform the financial system: send a message to major investors to stop big banks from funding climate chaos.