Home › Blog
Russia has become an overnight pariah. Banks should take rapid action to divest.
European and US banks like JPMorgan, Citi, UniCredit and Deutsche Bank have been recent supporters of Russian oil, gas and coal
By: Ryan Brightwell – BankTrack
2022-03-02 Contact: 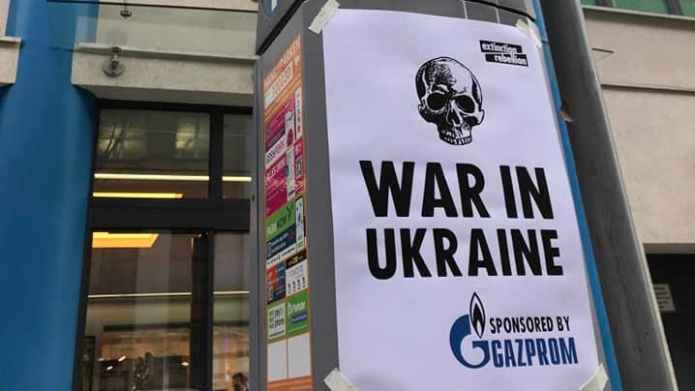 Cities bombarded, columns of tanks approaching Kyiv, up to half a million refugees, Putin threatening the West with nuclear devastation in retaliation for their use of sanctions and “aggressive” language  – the events of the past week are beyond shocking, even if we may take heart from the bravery of the Ukrainian response and the fact that, so far, this war is going worse for Russia than it might have expected.

As has already been widely noted (by XR Ukraine to take one example), this is a war funded to a great extent by Russia’s profits from fossil fuels, including Europe’s dependency on Russian oil and gas in particular.

Even in ‘normal’ times, Russian fossil fuels add in no small way to the global threat of runaway climate crisis. The IPCC warned this week, in a report issued against the background of the Ukrainian crisis, that the world risks missing “a brief and rapidly closing window of opportunity to secure a liveable and sustainable future for all” – while Ukrainian climate scientist Svitlana Krakovska was forced to withdraw from the approval process to shelter from the bombing. The argument for Europe to overcome its fossil fuel dependency just became much more urgent.

Some, including Shell and BP, have divested Russian fossil fuel assets since hostilities broke out last week, and there are signs that action is being taken in the finance sector as well. On Monday, Norway’s US$ 1.3 trillion sovereign wealth fund, the world's largest, announced it will freeze investments in Russia and prepare a plan for complete divestment. Californian lawmakers have called on the state’s pension funds, CalPERS, CalSTRS, to follow suit, and similar calls are being made in other US states.

It looks to us like the banking sector needs to get its act together, starting with those banks most exposed to Russian fossil fuels.

Let’s start with majority-state-owned Gazprom, Russia’s largest company. Gazprom is the second-largest oil and gas company in the world, accounting for over 10% of global natural gas production. It was also recently identified by Reclaim Finance as the “world’s biggest Arctic expansionist”, with 74% of its reserves based in the Arctic region.

Gazprom is also the operator of the NordStream 2 pipeline, which was frozen by Germany’s Chancellor Scholz. NordStream 2 was at the forefront of the Kremlin’s efforts to increase German and wider European reliance on Russian gas, and to bypass Ukraine as a transit route – and was embraced by much of Europe, prior to last week. As Urgewald’s profile on the project on the Global Oil and Gas Exit List (GOGOL) website makes clear, NordStream 2 was already a disaster for people and climate, opening up Arctic gas fields and threatening Arctic Indigenous people and their reindeer herds. Gazprom owns NordStream 2 and contributed half of the US$ 11 billion funds for its construction, with the remainder coming from Britain’s Shell, Austria’s OMV, France’s Engie and Germany’s Uniper and Wintershall Dea.

Our 2021 Banking on Climate Chaos report (the new 2022 report is coming later this month) shows Gazprom’s largest bankers to be JPMorgan Chase, with US$ 3.6 billion in finance between 2016 and 2020, followed by UniCredit (US$ 2.4 billion), Russia’s own Sberbank (US$ 2.4 billion), Deutsche Bank (US$ 1.0 billion) and Crédit Agricole (US$ 977 million). In 2020 alone, French Banks BPCE and Crédit Agricole, Italy’s Intesa Sanpaolo and UniCredit, and JPMorgan Chase provided US$ 3.944 billion to Gazprom.

JPMorgan Chase, the world’s largest banker of the fossil fuel industry, appears to have developed a close relationship with Gazprom in recent years. It participated in at least 13 deals for Gazprom and its subsidiaries between 2016 and 2020, totalling at least US$ 3.5 billion. It led a US$ 700 million bond issue for the company in 2014, “doing business that some U.S. banks are afraid to do, several lawyers and a banker said”, as Reuters reported at the time. A 2017 Gazprom press release, which begins “Gazprom and J.P. Morgan assess potential for deeper cooperation…”, was not available at the time of writing, with Gazprom’s website, like those of many large Russian businesses, down.

The bank’s response to the Russian invasion so far has been limited to suspending some funds and making a US$ 1 million philanthropic donation to relief efforts – yes, that’s million, with an m, an amount that likely pales in comparison to the bank’s profits from its Gazprom business alone. And it has advised its clients against divestment, saying “at this stage we caution against knee-jerk outsized swings in allocation beyond taking portfolios to more neutral positions.”

The reaction from Italy’s UniCredit, Gazprom’s second largest financier - whose Russian subsidiary is one of the largest banks in Russia - has been even more subdued. No response by the bank to the crisis has been seen, while its shares plummeted by 8% on February 24th, enough last week for trading in them to be suspended.

But it is not just gas and oil. SUEK, Russia’s largest coal company, has also been able to count on the support of Western banks recently. Just two months before the Glasgow Climate Summit, Commerzbank, Citi and Bank of America helped SUEK raise US$ 500 million in bonds, alongside Russian and Chinese banks. The banks had no trouble finding buyers for the bonds, although the Anthropocene Fixed Income Institute notes “a non-zero probability that the issuer will not be able to/not willing to pay coupons to international investors” given recent developments – meaning they think it might prove not to be such a good investment).

Citi, one of the SUEK underwriters and also a lender to Russian oil major Lukoil according to Banking on Climate Chaos data, disclosed this week that it’s total exposure to Russia amounts to nearly US$ 10 billion, and warned of a potential hit to its business. However the bank has not yet responded to calls on the bank to divest.

Investment in the likes of Gazprom and SUEK looked like a terrible idea from the perspective of climate, environmental and human rights risks, even before Russia’s invasion of Ukraine. As it becomes clear that this finance has also contributed to the alarming destabilisation of a continent, banks need to take urgent action to distance themselves from the Russian regime and its fossil fuel companies. This also applies to their relationship with Kremlin-aligned oligarchs with billions stored in Swiss banks.

As governments ratchet up sanctions on Russian businesses and kleptocrats, divestment action from the banking sector can add to the financial pain of Putin’s invasion, as well as representing a small step towards fulfilling those “net zero by 2050” promises.