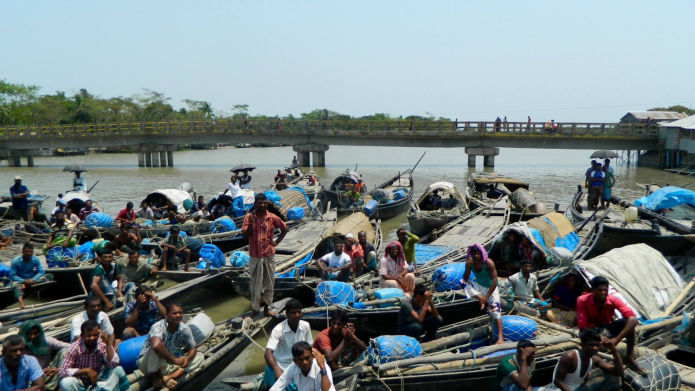 As 2016 draws to a close, the controversial Rampal coal plant in Bangladesh remains unfinanced. To date there has been no financial closure on a $1.6 billion credit from India Ex-Im, India’s export credit agency. The delayed investment has been looming for some time now for a project widely regarded as being foisted by India on its neighbour – and, in particular, on the world renowned Sundarbans mangrove forest and its fragile ecosystems.

Rampal is being challenged and severely tested on various fronts. Following a UNESCO report in October detailing the irreversible damage to the waterways, inhabitants, wildlife and rich biodiversity of the Sundarbans which the project would deliver if realised, there has been no indication that the Bangladeshi government or companies involved are willing to back down in the face of the unequivocal UNESCO recommendation that the proposed coal plant should be ‘cancelled and relocated’. Not surprisingly, high level lobbying aimed at breaking UNESCO’s resolve on the Sundarbans is said to be well under way.

Bangladeshis, meanwhile, took to the streets at the end of November, with the latest anti-Rampal protest attracting thousands of people to the capital Dhaka. Country-wide resistance to the coal plant is growing, and an escalation of these protests is planned for early in the new year.

While the Bangladeshi government continues to stick to its line that there is no alternative to Rampal’s coal-fired power supply, the Institute for Energy Economics and Financial Analysis (IEEFA) also pitched in to the debate in November with the publication of a 64 page report which provides just such an alternative scenario: a cheaper, cleaner and faster-to-implement alternative electricity plan for Bangladesh based on the country’s huge energy efficiency and solar energy potential.

According to Tim Buckley, IEEFA’s director of Energy Finance Studies for Australasia, a stronger focus on Bangladesh’s already flourishing solar home system program would “rapidly eradicate energy poverty and facilitate health and education improvements where they are most needed in rural Bangladesh.”

Yet it has long been clear that Indian coal interests are giving the Bangladeshi government no alternative but to stick to this ‘no alternative’ position. This has become all the more galling following the encouraging signals contained in last week’s widely reported draft National Electricity Plan from the Indian government which anticipates no need for new coal plants in India up to 2027, other than those already under construction. A big, 100 gigawatt doubling of India’s clean energy capacity is now being viewed in New Delhi as the way to go.

Will Bangladeshis, then, just have to swallow India’s coal double standards and all the threats that go with them, including the delivery of four million tonnes of coal every year via some highly precarious waterways? Recall that Rampal, a joint venture involving India’s state-owned National Thermal Power Corporation and sited only 14 kilometres from the Sundarbans reserve forest, would not be doable in India as a result of its 1972 Wildlife Protection Act which rules out such projects within a 15 kilometre exclusion zone around national parks, wildlife sanctuaries and reserve forests.

Much still depends on that $1.6 billion India Ex-Im financing, some of which will have to be raised on the bond markets. As BankTrack and more than 50 organisations recently pointed out to a clutch of western banks with a history of assisting India Ex-Im with its bond issues, any further such bond arranging will be tantamount to ‘enabling’ Rampal.

It’s clear that banks involved in bond arranging can have influence over how the money is spent. For example, India Ex-Im itself, in an October 2016 article in Responsible Investor (behind paywall), claimed the projects to be financed by its first ‘green bond’ issue “were identified based on the advice of the joint lead managers” – i.e. banks. In this case the lead managers were Bank of America Merrill Lynch and JPMorgan Chase, two of the banks we have just warned about the serious reputational risk that will result from further bond issue involvement with India Ex-Im.

Green bonds, intended to help finance pro-environment projects, may require more policing and ‘advice’ than standard bonds, but banks which involve themselves in these capital-raising processes for clients would do well at all times to bring their influence to bear on clients in order to ensure that the financing of egregious projects does not result from capital raising which they facilitate for a healthy fee. And UNESCO has judged – in strong terms – that Rampal will be an egregious project.

Another of the banks we have addressed is Standard Chartered. Following an anonymous tip-off, Standard Chartered has confirmed to us that it has already opted to support Rampal by insuring one of the project’s construction companies via a $45 million ‘performance guarantee’.

This is a highly negligent undertaking for a bank which is supposed to abide by its own risk management declarations and restrict the provision of financial services to clients in the fossil fuel power generation sector who would have a significant impact on UNESCO World Heritage sites or protected wetlands (such as the Sundarbans).

The bank has said it “will not provide further financial facilities related to Rampal”, but it is unclear if this extends to assisting Ex-Im India with bond issues. Standard Chartered and other potential supporters of Ex-Im bonds are now on notice, and we hope they can make their influence felt on the Indian institution: UNESCO’s Rampal warning is for real. If things don’t turn out as planned on Rampal (and here’s hoping they don’t), Standard Chartered may have to pay out on that performance guarantee. And that could well be a hit worth taking, given what’s at stake in the Sundarbans – including bank reputations.