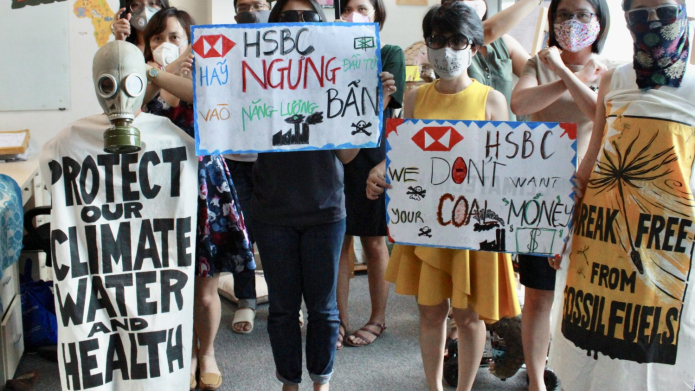 With the Brexit saga rumbling on in the UK, if there’s one thing that can be said about the recently concluded UK bank AGM season it’s that Barclays, HSBC and Standard Chartered are pursuing their own particular form of isolationism from their European counterparts.

This relates to how the UK’s big three have been positioning themselves in recent weeks with regard to their continuing (alas, yes!) financing for coal power globally.

The coal power policy noises that have been emerging from Barclays, HSBC and Standard Chartered as they have prepared to meet with their shareholders reveal a widening gulf with many of their competitors. Fifteen international banks, including 12 big European banks, have now adopted a worldwide ban on project finance for coal power plant projects, reflective of the growing awareness across the finance sector, two and a half years after the inking of the Paris climate agreement, that coal investments have to be dumped, and quickly.

However, if concrete commitments are anything to go by, the message is not penetrating deeply enough in the City of London. This despite an early April warning from Mark Carney, the governor of the Bank of England, that climate change will likely have a “catastrophic impact” on the financial system unless firms do more to disclose their vulnerabilities. And the UK banks' stance is doubly disappointing given that the UK government is making the running with Canada in promoting the Powering Past Coal Alliance, a global, multi-stakeholder alliance committed to moving the world from burning coal to cleaner power sources.

Let’s start by looking at the starkest missed opportunity unveiled by Barclays just before its AGM on May 1. As revealed by our Fossil Fuel Report Card 2018 data, between 2015 and 2017 Barclays increased its financing for coal power companies year on year, reaching $1.476 billion in 2017. The bank’s reaction to this black mark? Far too little, other than the publication – for the first time publicly in a sectoral policy – of how it plans to approach coal power financing going forward.

Barclays is intent, for now at least, on still potentially financing climate-busting, public health-depleting coal power projects in all developing countries. Bear in mind that it’s now two years since World Bank president Jim Yong Kim warned of south-east Asian coal power plans that “if the entire region implements the coal-based plans that are in existence right now, I think we are finished.”

Barclays’ new policy language speaks of developing “a strategic approach that is sustainable in the long-term” for its global energy client portfolio. It’s now paramount for the bank to rapidly revisit its approach to coal power, and seek to develop an approach that, in the short-term, is sustainable for the planet and for communities in the developing world which are facing new coal plant build-out.

Meanwhile, HSBC, despite extensive appeals and submissions from NGOs warning that the coal industry’s ‘coal power in the developing world is necessary for development’ mantra is baseless hyperbole, has managed to gain plaudits for ending its direct finance for coal power globally – though it is quite clearly not doing so.

The new HSBC approach to coal power finance sees the bank ready and willing to finance coal plant developer companies planning new plants in three potentially very big coal power markets: Vietnam, Indonesia and Bangladesh. According to the latest data from CoalSwarm, combined these three countries currently have coal power plant pipelines totalling close to 80 gigawatts, the equivalent of the current operating coal capacity of Germany and Poland combined, the two biggest European coal consumers and emitters. This is a potentially massive loophole which HSBC has chosen to leave open.

To have drawn a clear, ambitious policy line in the sand and withdraw from coal power in the developing world would appear, for one thing, to have been just too inconvenient for ongoing HSBC coal deals in Vietnam and Indonesia. Currently the bank is involved in four coal plant Dodgy Deals in these countries: in Vietnam, Long Phu I, where it is the global coordinator, and Vinh Tan 3, where it is financial advisor; in Indonesia, the Sumsel 9 and Sumsel 10 mine mouth projects, where HSBC is the financial advisor.

These four ongoing deals are bad enough, but baked into the HSBC policy is the possibility to close other deals over the next five years (up to 2023), an excessively great window when not a single new coal plant deal should now see the light of day given the climate and health urgencies. And all this when there have recently been some clear indications emerging from the governments of Vietnam and Indonesia that they will most probably not attempt to build all of the coal power projects that have cluttered their national power plans for years.

If there is a rush now to build as much as they can in short order over the coming years, rather than starting to tap into abundant renewables potential (in Indonesia, in Vietnam and in Bangladesh), then HSBC’s policy signalling will have a lot to answer for.

Which leaves us with the big unknown for now: is the ongoing review of Standard Chartered’s approach to coal power financing, thought to be being finalised in the coming few weeks, going to see it doing ‘an HSBC’ and stay in coal financing in selected developing world countries?

The indications coming out of the bank’s AGM in London two weeks ago are that, despite a lot of new ‘sustainability’ mainstreaming taking place across its operations, it too is having its head turned by the ‘coal for development’ red herring, as well as certain pressure from governmental lobbying to help facilitate unpopular, controversial coal plant building in the coming few years across south-east Asia.

One of the three pillars of the bank’s new sustainability philosophy is ‘Do the right thing’. Remaining in the direct financing of new coal plants, at this point in history, is assuredly not the right thing to do, when Standard Chartered should be grasping sustainability by the horns and persuading governments to turn to renewables, to make good on their Paris commitments, and provide them with the much sought after capital to achieve this.

This weekend, as sponsors of LIverpool Football Club, Standard Chartered's brand will be on display to more than a billion people during the Champions League Final in Kiev. The bank should be channelling Liverpool's traditional hymn – and walking on out of coal, to give hope to the many communities who are resisting proposed coal plant projects throughout south-east Asia.