Home › Blog
One Planet Summit: A round up of new fossil fuel policy announcements
By: Yann Louvel – BankTrack
2017-12-21 Share this page: 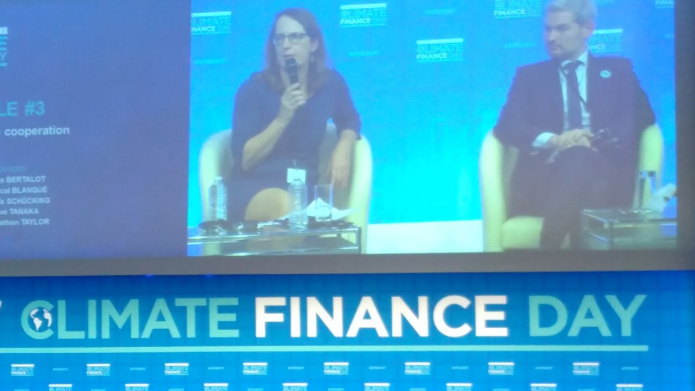 Heffa Schüeking, urgewald director, at the One Planet Summit: "Banks and investors not only need to be part of the solution, they also need to stop being part of the problem". Photo: Yann Louvel

The One Planet Summit held in Paris last week saw several banks announcing new commitments to restrict or cut their financing for fossil fuels. It also saw BankTrack launch ‘Banks vs. the Paris Agreement’, revealing the extent to which the world’s commercial banks are still financing the top 120 coal plant developers. This blog summarises and analyses the latest bank moves out of fossil fuels.

Following the encouraging move made by BNP Paribas in October on tar sands and shale gas financing, and dynamic campaigning from Friends of the Earth France, the other big three French banks announced new policy measures in the days leading up to the summit.

Crédit Agricole was the first to announce it will be ending direct financing for some extreme oil projects, including oil sands, Arctic drilling, pipelines and other infrastructure. The bank’s criteria for blacklisting the companies behind these projects to prevent them being supported by general corporate finance are not clear, and we have approached the bank for clarification. One thing is clear though: the exclusion of oil sands pipelines projects was not sufficient to stop Crédit Agricole from renewing credit facilities to TransCanada, the company planning to build the Keystone XL pipeline, just a few days after its policy announcement.

Société Générale followed, making similar commitments, yet notably the bank did not end support for infrastructure projects like tar sands pipelines. These steps fall far short of those adopted by BNP Paribas, and do not address Société Générale’s involvement in several Dodgy Deals around the world, including the Rio Grande LNG project in Texas and the Trans Adriatic pipeline in Europe.

Natixis, too, got in on the act, coming closest to the advances made by BNP Paribas. The bank has committed to stop financing tar sands production and transportation projects, as well as companies 'whose business is primarily backed by reserves of oil extracted from tar sands' or 'whose revenues primarily rely on the exploration, production, transport, storage or export of oil extracted from tar sands'.

These moves on extreme oil suggest that the ground is starting to shift on fossil fuel financing, a point underscored by the World Bank’s announcement in Paris that it is to end all financing of oil and gas extraction after 2019. Campaigners will be calling for private sector banks to urgently follow the World Bank’s lead.

AXA may be an insurer rather than a bank, but its decision to divest from tar sands companies and to further its divestment out of coal attracted attention from all coal finance campaigners. AXA’s CEO announced at the opening of the One Planet Summit that it would become the first financier to take its lead from the Global Coal Exit List, a divestment tool published last month at COP23 in Bonn by our German partner urgewald (and the starting point for our analysis in ‘Banks vs. the Paris Agreement’).

#CFD2017 Official applauded quote of the day by Heffa Schüeking from @urgewald : "Banks and investors not only need to be part of the solution, they also need to stop being part of the problem" #OnePlanetSummit #BanksVsParis https://t.co/sKalZnRuFw #NotAPennyMore pic.twitter.com/0WXY1e75vz

AXA is the first big investor to endorse and follow the philosophy behind the three divestment criteria used in the Global Coal Exit List, most notably the forward-looking perspective which focusses on the companies intent on building and firing up new coal plants in future. AXA’s ambitious move now sets the bar for other investors and banks to follow suit, as well as setting an important milestone for a paradigm shift in favour of 'impact divesting'.

ING and NAB move out, but HSBC: 'Happy Still Being in Coal'

Dutch bank ING was the only bank to announce a new policy measure on coal during the summit proper. By the end of 2025, ING aims to ‘no longer finance clients in the utilities sector that are over 5% reliant on coal-fired power in their energy mix’.

This coal power phase out commitment is a first in the global banking sector, and the bank is to be applauded for such a step. What remains uncertain for now, however, is what is ING’s approach going to look like for the next seven years: when will it choose to end support to utilities which are clearly not going to hit the 5% threshold by 2025? We believe ING should be immediately blacklisting companies that are planning to expand coal power, including non-utility companies that are not covered in its updated policy for now. The implementation of this new commitment will warrant close tracking.

Two days after the conclusion of the summit, NAB became the first Australian bank to end direct financing for new coal mining projects worldwide, joining the ranks of the 15 international banks which had already committed to this.

HSBC was a sponsor of the Paris events and present on several panels, but chose not to take this prime opportunity to offer any new policy contribution in the fight against climate change. HSBC remains one of the last big European banks not to have ended its direct financing for new coal plant projects worldwide. On the contrary, it recently defended its policy of financing coal power in developing countries, saying it is "not the right thing to do" to withdraw, and is currently busy advising and coordinating the financing of new coal plants projects in Vietnam – Long Phu I and Vinh Tan 3. The bank is also the only European presence in the top 20 banks financing coal plant developer companies.

New coal plant deals, such as those in Vietnam, make a mockery of the increasingly loud, high level calls heard at the One Planet Summit insisting that banks have to start saying goodbye to coal finance. The message that banks need to quit coal for good is going mainstream. As former US secretary of state John Kerry put it succinctly: "the financing of the coal industry must come to a complete end. PERIOD."

The positive bank announcements made this month in Paris are to be welcomed, but a huge number of banks are yet to break cover and take any steps away from coal, most notably but not exclusively the big Asian banks that make up the bulk of the top 20 backers of coal plant developers. By the time of the next global climate summit – COP24 in Poland in December 2018 – and as laid out in our new report, each of these banks should explicitly blacklist these companies, as ABN Amro did partly earlier this year, as part of moves to quit coal completely.

"To all banks in the world: no coal investments. Period." pic.twitter.com/GAp3nLTigk