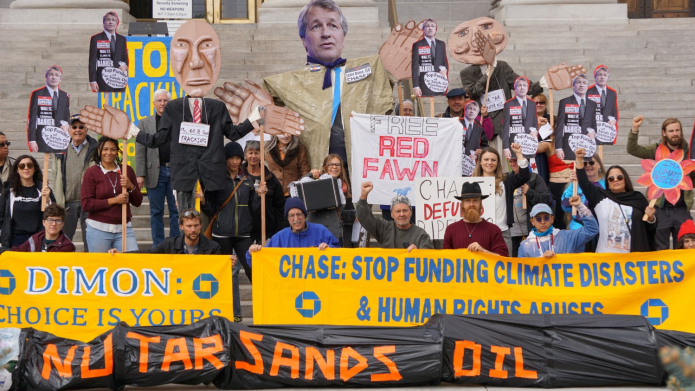 Despite mounting public opposition from a broad coalition of Indigenous and environmental groups, JPMorgan Chase and Wells Fargo renewed their participation in a set of loans totaling $1.5 billion to TransCanada, the company behind the Keystone XL tar sands pipeline .

The banks have faced significant pressure in recent months to divest from the controversial pipeline, which would transport dirty, climate-polluting tar sands through the Midwest to the Gulf Coast for export, threatening Indigenous rights, land, water, and communities along the way.

“Wells Fargo’s PR team loves to tout the bank’s commitment to responsible investing and transitioning to clean energy, but today’s decision makes it clear that it’s all talk. Keystone XL would be a disaster for our communities and our climate, and any bank that’s helping fund this terrible project and others like it is on the wrong side of history. The growing movement working to hold banks like Wells Fargo accountable for their reckless investments is not going anywhere. It will only grow louder and stronger until our financial institutions commit to investing in a future that benefits our communities, our economies, our health, and our planet.”

“Wall Street is failing the climate test and violating the free, prior and informed consent of Indigenous people. JPMorgan Chase and Wells Fargo had an opportunity to cut ties with TransCanada and the KXL pipeline and they chose to walk on the wrong side of history. This goes to show that JPMorgan Chase and Wells Fargo could care less about devastating the lives of real people caused by the environmental destruction and climate disaster wrought by tar sands.”

“This is deplorable. JP Morgan Chase and Wells Fargo have chosen to double down on the plunder of Indigenous lands, to condone violence perpetrated against peaceful water protectors and to further the trampling of Indigenous rights to Free, Prior and Informed Consent. Furthermore, Wells Fargo just announced $50 million worth in grants to Native Americans while dumping billions into tar sands oil development, diminishing the lives of Native Americans at the source. The irony and contradictions cannot and will not go unnoticed. We must stop tar sands and keep fossil fuels in the ground!”

“Greenpeace is deeply disappointed that JPMorgan Chase and other banks continue to fund companies trying to build dirty tar sands pipelines -- projects that jeopardize human rights, drinking water, and our climate. These banks are on the wrong side of history. Hundreds of thousands of people are stepping up to oppose these pipelines and the financial lenders bankrolling these projects. Other banks have announced moves to step away from tar sands this year, yet JPMorgan Chase and Wells Fargo continue to fall behind the curve.”

"This is about protecting water -- when you think about how critical water is to Montana's economy, you have to ask why banks are supporting projects as dirty as the Keystone XL pipeline. Over the long haul, it just doesn't make good sense. Keystone XL would go under the Yellowstone River about 13 miles upstream from my farm. I've already dealt with one major oil spill in the river near my property, and I never want to see that again. I want my children and my grandchildren and their children to keep coming to this farm. But without clean water, our farm couldn't operate. Without clean water we have nothing."

Here is a list of the 19 banks that are lenders to one or both of the two revolving credit facilities that were just extended: