Home › Blog
From fisherman to refugee, in part thanks to ING
A report from the coast of Cabo Delgado, Mozambique
By: ING Fossielvrij
2022-07-12 Share this page: 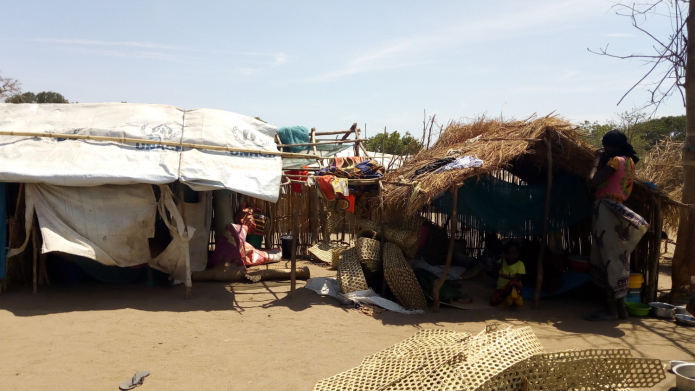 Ilham Rawoot works for climate organisation Justiça Ambiental/ Friends of the Earth Mozambique. She shares with us why ING’s financing of companies that extract gas are so harmful for Mozambique. ‘You need to divest from fossil fuel companies because that’s the only way they are going to change.’

Ilham Rawoot has a busy schedule during her stay in the Netherlands. She is meeting up with climate activists, she is talking to members of parliament and representatives of ING and other banks and she is giving talks. Her message is clear: Dutch banks have to divest from companies that extract gas from Mozambique as soon as possible.

“I work for Justiça Ambiental/Friends of the Earth Mozambique. This is a Mozambican non-governmental organisation working on the climate, environmental and social impacts of Mozambique's uncontrolled and unsustainable development. Activists and journalists who speak out against gas extraction projects are being arrested. This makes it especially important for people outside of Mozambique to help make the voices of the affected people heard. Furthermore, these projects are led by foreign companies that are financed by foreign banks such as ING. Dutch money flows towards these projects and that’s why we are also calling on the Dutch people to take action.”

Can you give a brief summary of what’s happening in Mozambique?

“The gas industry in Mozambique is growing rapidly. TotalEnergies, ExxonMobil and Eni, together with other fossil fuel companies, want to start three projects to extract gas offshore of the Cabo Delgado Province. Because the extraction will be happening at sea, these companies claim that they are not responsible for the impact on land. Meanwhile the livelihoods of the local population are being devastated. Even though the extraction hasn’t started yet, already more than 550 families have been forced to move. Their villages have been wiped off the map, because they were in the way of the Afungi LNG Park, where all kinds of facilities will be located that are necessary for the gas industry. These families have been moved to another village, more than ten kilometres inland and far from their farmland, while most villagers were dependent on fishing and farming for their income. The new parcels of land these people were given for farming are way smaller than what they used to have. So these people were no longer able to sustain their own living and many families became dependent on food aid from TotalEnergies. However, this food aid has ceased as well and many of these people are now living in refugee camps.”

O wow, that is harsh! Why did they end up there?

“Some people were unable to live in the replacement camp as they were unable to sustain themselves, others because of the violence in Cabo Delgado. Many people have been living in poverty for years and feel abandoned by the government. The plans for the gas projects have contributed to this as well. This is a breeding ground for extremism. The government is saying that these tensions have to do with religion, but that is not the whole story. It’s a complicated situation and all kinds of factors play a role. Within a timespan of four years, the rebels have killed almost three thousand people and many more have been injured or have fled. The government responded by deploying the army – which also committed human rights violations – and paramilitary groups, and now the Rwandan army is there as well. In March of 2021, TotalEnergies froze the project after an attack on the town of Palma. However, even though the conflict hasn’t been resolved, TotalEnergies may want to resume construction later this year.”

The direct consequences for the local population are disastrous, and you haven’t even mentioned the greenhouse gas emissions due to construction and the burning of the extracted gas. What is the impact of these gas projects on the climate crisis?

“These gas companies are referring to an outdated and incomplete assessment report to claim that the impact isn’t that bad. However, recent research has shown that the emissions from all the gas coming from Mozambique will be just as large as the emissions of all European airports combined. These extra emissions will be especially disastrous for a country like Mozambique, because people there are already coping with extreme droughts, flooding and tropical storms, caused by climate change. This is why a judge in the UK last year declared these investments as unlawful, because they are not in line with the Paris climate agreement. The Mozambique government, and other governments that are involved with gas projects like these, are getting really scared because of this decision. This gives us some hope.”

You are also calling on the Dutch people to take action, for example by holding the ING bank accountable for their financial policies. How exactly is ING involved with these gas companies that are active in Mozambique?

“ING finances Eni and has financed TotalEnergies in the past, two of the companies leading the projects. And just like other investors, they are making excuses. For example, ING claims to have pulled out of new fossil fuel extraction projects. However, since ING is still financing companies that are taking on these types of projects, it amounts to the same.

“Banks are also passing the blame to their clients, such as Eni and TotalEnergies. But without money, these projects will never come to be. The same goes for contractors who build the factories and companies that buy the gas. Everybody is pointing at one another, but in the end, everyone is complicit. You have to take responsibility, but nobody wants to.

“If just one bank pulls out, that’s bad for the reputation of Eni and TotalEnergies. You need to divest from fossil fuel companies, because that’s the only way they are going to change. Looking at the situation in Mozambique, if this situation isn’t bad enough for financiers to pull out, then I don’t know what is.”

What do you think the energy sector should look like in Mozambique?

“Gas extracted from Mozambique is meant for other countries. The government and companies are promising that the revenues will bring prosperity for the people of Mozambique, but history shows that this rarely happens with projects like these, that are led by foreign multinationals. Profit is primarily made by these companies, while the local government hopes to be able to use these profits to pay off debts. The debts sometimes even originate from colonial times. And there is a lot of corruption, so the profit that Mozambique does make often does not end up in the pockets of the local community. Meanwhile only thirty percent of the people of Mozambique have access to electricity and most people live in poverty.

“People often ask: What if we invest in renewable energy instead? Would that work? Well, yes, that would be an improvement, but it won’t be enough in itself. You can create a wind farm, but then you could still displace people and evade taxes like Eni and TotalEnergies are doing. It’s the whole system of foreign direct investments that has to change. People need to be able to own their means of energy production. Energy production should be organised at a small scale and aimed at the needs of the community.

“We have a long way to go. Fortunately more and more people and investors are starting to see what’s actually going on. Internationally, more and more people are standing up for Mozambique. I’ve noticed an increase in climate activism in industrialised countries. And we really need people to protest. It’s the only way to stop these gas extraction projects and work towards sustainable energy production in Mozambique.”

The original interview text in Dutch can be found here.

Take action to stop ING's financing of fossil companies worldwide. Call on your employer, favourite museum or association to challenge ING on their fossil fuel financing. Check out the toolbox to see where you can start.