Home › Blog
Barclays is big on beef and burning
At Barclays AGM campaigners will be calling on the bank to stop financing big meat and burning fossil fuels and forests for energy
By: Hannah Greep – BankTrack
2022-05-04 Contact: 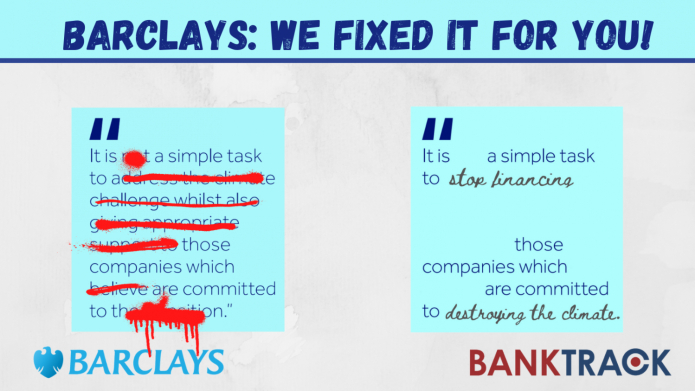 The focus of Barclays AGM this year is their recently published “Say on Climate” plan which will be voted on by shareholders at the meeting today. The plan goes into details of how the bank plans on fulfilling its commitment of two years ago to become net zero by 2050 across all direct and indirect emissions and align all of its financing activities with the goals and timelines of the Paris Agreement.

Unsurprisingly, the climate plan is underwhelming for a myriad of reasons, including loopholes in its coal policies, failing to update the bank’s oil and gas policies, and no mention of the industrial livestock sector despite the meat industry’s significant damage to the global climate and Barclays' exposure to some of the biggest and baddest meat companies in the world. In addition, Barclays sets a target to provide GBP 100 billion in “green financing” by 2030, but there is no explanation of what exactly this is financing. This is particularly troublesome given their investments in companies that are operating in the forest biomass sector which is supposedly “green” but emits more carbon, on a per-unit-of-energy basis, than burning coal.

In the statement, Nigel Higgens, the Chairman of the Board states that: “It is not a simple task to address the climate challenge whilst also giving appropriate support to those companies which we believe are committed to the transition.”

However, a quick look into Barclays' clients base shows that being “committed to the transition” is not exactly a condition for receiving such support. Rather, the companies Barclays keeps on the books are involved in fossil fuel expansion, deforestation and burning forests for energy - all of which are examples of exactly how not to save the planet from a climate disaster.

Barclays is the biggest European financier of JBS (1), based in Brazil, which is the largest meatpacking company in the world, and a company with well documented links to illegal deforestation, slave labour and several major corruption scandals. JBS is the largest emitter of greenhouse gas emissions in the meat and dairy sector and new research shows that the company’s emissions increased over 50% in the last five years, to now being equivalent to half the UK’s climate footprint. JBS’s weak net zero commitment fails to tackle 97% of its emissions.

The company’s failure to tackle its emissions or deforestation within its supply chain hardly shows an indication that JBS is a company seriously “committed to the transition” and continuing to finance the company is therefore at odds with Barclays’ commitments on climate and the bank should drop them as a client.

Given this, BankTrack will be asking Barclays a question at their AGM on whether they will commit to improve their policies so that they cover industrial livestock companies like JBS, ensuring that they are subjected to enhanced human rights due diligence and ruling out finance for companies that fail to fulfil their climate and deforestation targets.

Barclays is also Europe’s worst fossil fuel financier and Europe’s second largest provider of financing to top oil and gas expanders. It has provided USD 13 billion in financing to the top 50 upstream oil & gas expanders since committing to net-zero by 2050 in March 2020, despite its commitment to use the International Energy Agency's (IEA) 1.5°C-aligned scenario as its baseline for new targets. The IEA has been clear that there is no room for new oil and gas fields for a 50% chance of staying within the 1.5°C target, but Barclays continues to finance some of the world’s worst fossil fuel expansion companies like Exxon Mobil and Shell. Between 2016 and 2021, Barclays pumped USD 12 billion and USD 6 billion into Exxon and Shell respectively. Both oil majors have also been accused of a range of environmental and human rights abuses.

Shell’s involvement in fossil fuel expansion, particularly in the North Sea, should be of particular concern to Barclays if it wishes its transition plans to be taken seriously. Shell’s planned new gas field, Jackdaw, would lock in emissions that are entirely incompatible with a 1.5°C pathway. Additional fossil fuel projects may have been touted as the solution to the energy crisis resulting from the Ukraine war, but this is a false solution since new fossil fuel infrastructure would start producing energy too late to actually respond to the current crisis. The result would actually be to lock us into emissions for decades to come, a fate that does not need to be inevitable since there are far greener solutions out there to curb the current crisis.

And then there is Barclays’ continued support for biomass. Biomass is widely - but wrongly -  considered a renewable energy and supply and demand for woody biomass is expected to increase over 250% in the next decade. Burning woody biomass for energy is not carbon neutral. It immediately emits large quantities of greenhouse gases into the atmosphere while it takes decades to centuries for forests to regrow and sequester the carbon, which is far too long to effectively contribute to staying within the 1.5°C Paris Agreement target for 2050. Despite this, Barclays continues to finance some of the biggest companies involved in the burning of forest biomass, such as Drax and Vattenfall.

Drax is the world’s biggest burner of trees and the UK’s single largest carbon emitter. It is also the world’s second biggest producer of wood pellets, with all its pellet plants located in the Southeastern USA and Canada (British Columbia and Alberta) where the use of whole hardwood trees from clear cut forests has been shown to be the most carbon-intensive form of biomass. The company’s tree burning is leading to forest destruction and huge amounts of pollution around the world, harming poor and marginalised communities the most. Barclays are Drax’s official bankers, and they arranged the loan facility that allowed Drax to convert four of its coal units to burning wood pellets.

Swedish company Vattenfall has adopted the slogan “fossil-free living within one generation” which not only lacks the required urgency to tackle the climate crisis, but is in complete opposition to the companies continued burning of coal and large amounts of fossil gas. As part of its so-called renewable energy investments, Vattenfall is increasing the amount of wood burned for energy, planning, amongst others, to expand its wood burning plant in Berlin more than five-fold by 2030 and proposing a new biomass plant in Diemen, the Netherlands, despite strong opposition including from the municipality. In 2021, Barclays worked with Vattenfall over a EUR 500 million “green bond” which would partially finance those biomass investments.

Along with many other organisations, we will be attending the Barclays AGM to ask them some probing questions regarding their continued finance for companies like JBS, Exxon Mobil, Shell, Drax and Vattenfall that do not align with their commitments to become net zero by 2050. These companies are far from “committed to the transition” and Barclays needs to acknowledge that. In order to be a true leader on climate, Barclays needs to move #BeyondBurning fossil fuels and woody biomass and #DropJBS and other harmful meat companies. The bank should rather invest in resilient food systems,  zero emissions energy solutions, and ecosystem conservation and restoration - only then will it be “committed to the transition”.

Stay tuned on Twitter at @BankTrack and @NoFossilBanks and the hashtags #DropJBS, #FossilBanksNoThanks and #BeyondBurning to see more from campaigners attending the AGM and asking Barclays some probing questions about its policies and investments in meat, fossil fuels and biomass.