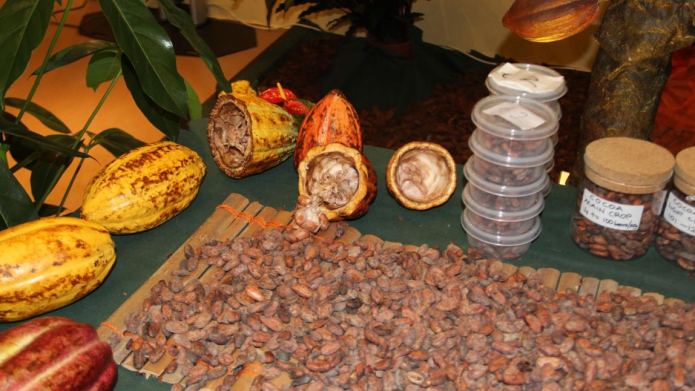 In August this year the Dutch Banking Sector Agreement on Human Rights (DBSA) released its first annual report together with three other publications. This is the third in a series of articles examining these publications - collated here - and focuses on the Cocoa Value Chain Analysis.

On Friday 2nd November the Dutch Banking Sector Agreement on Human Rights held its first ‘Stakeholder Meeting’ in the Hague - its first public meeting to discuss the progress of the agreement. In a sign of the level of cooperation that the agreement has fostered, both main information sessions featured joint bank and civil society presentations, with the recent paper on the cocoa value chain presented by representatives of ABN AMRO and Save The Children Netherlands.

This close collaboration has not always been straight-forward. Value chain mapping exercised are one of the two main types of ‘tool’ that the DBSA planned to deliver, alongside a public matrix or database of human rights information. The ‘matrix/database’ plan has been abandoned after some consideration, with lessons learned to be incorporated into the value chains approach, as the DBSA Annual Report set out.

As for value chain mapping, the initial intention to undertake a minimum of two and a maximum of four sector mappings a year for three years (up to the end of 2019) has been scaled down, with the ambition, we understand, now being to publish four mapping reports in total - on palm oil, cocoa, gold and most likely oil and gas. A draft of the palm oil mapping exercise has been published for consultation, but in a half-finished form. The cocoa mapping exercise is so far the only one that has been finalised.

We have been critical of the DBSA’s publications so far - its annual report lacked an honest appraisal of the Agreement’s achievements and shortcomings to date, while the leverage paper produced a wealth of interesting ideas but seemed lost as to what to do with them. Thankfully the Cocoa Value Chain Analysis does much better, confronting the realities of child labour, forced labour and deprivation among smallholder cocoa farmers in West Africa, and reaching specific and timed recommendations. The big question is whether these recommendations are sufficient to improve living standards for the farmers and communities that provide the raw materials for our chocolate fix.

The role of Dutch banks in the cocoa trade

The paper begins with a clear and ambitious goal, “to make a substantial contribution to reducing adverse human rights impacts in the cocoa value chain.” It then sets out starkly the human rights impacts of the sector, which are focused at the start of the chain. 70% of cocoa originates from West Africa, and almost all of it is produced by smallholder farmers, on small plots of 1 to 3 hectares. Prices have been low for many years, leaving farmers unable to make a decent living, switching to other crops is difficult, and child labour is common.

From these smallholders, cocoa beans make their way, largely via state-controlled or managed central market-places like the Ghana Cocoa Board (Cocobod) and the Ivory Coast’s Conseil du Café Cacao (CCC), to a handful of international trading companies, the largest of which are Cargill, Olam and Barry Callebaut. The beans are then processed into products like cocoa paste, cocoa powder and cocoa butter and sold to chocolate manufacturers.

The role of Dutch banks in financing the first part of the chain is limited - transaction costs are high, Dutch banks have a limited presence, and smallholder farmers are by and large a poor match with the banks’ risk appetites. However, Dutch and international banks are involved throughout the remainder of the value chain, from the central market-places to the traders, manufacturers and retailers. For example, the paper notes that Cocobod has a syndicated loan facility in which several Dutch banks participate - showing a surprisingly direct level of finance close to the base of the supply chain. However, the Dutch banks’ main role in the industry is with the traders, as they provide commodity finance to support the bulk shipment of cocoa beans from producing countries to processing facilities.

After setting out the extent of Dutch banks’ involvement in the industry, section three of the paper describes the human rights impacts of the cocoa sector in more detail - including the right to an adequate standard of living, to freedom from child labour and forced labour, and land rights - and the root causes of these impacts, which include weak governance and huge inequalities in bargaining power.

These are deep-rooted structural problems, and there are already numerous initiatives in place aimed at tackling them - the subject of the paper’s section four. Some of these are driven by big players in the industry: Barry Callebaut, a cocoa trader, and Nestle, a manufacturer, are mentioned as examples of companies with Child Labour Monitoring and Remediation Systems (CLRMS) in place to measure and reduce incidence of child labour. These appear to be working. Nestlé, for example, reports reducing child labour in its supply chain by 51% in a three-year period.

These company initiatives are discussed alongside certification schemes and industry initiatives like the World Cocoa Foundation and the International Cocoa Initiative. Triodos is mentioned as the only Dutch bank with a commitment to finance only certified cocoa beans - although the report makes clear that certification is no panacea (and others have been harsher).

As for the banks themselves, all Dutch banks “have a sustainability risk framework to assess the commitment, capacity and track record of clients in the cocoa sector”, as the report sets out. A main focus of their efforts is engaging clients, particularly manufacturers and traders, to encourage improvements: “The intended effect of banks’ efforts is to challenge clients that operate closer to these impacts to raise the bar and push for improvements.”

However, there is very limited transparency and accountability behind these engagement efforts, which makes it impossible to judge their effectiveness. Banks for the most part do not disclose which companies in this sector they are financing - although they could disclose these relationships with client consent. Nor do they disclose whether their ‘engagement’ with their clients includes real, timed demands with a threat of divestment, or merely a polite discussion about measures already in place.

The Dutch banks’ plans for the cocoa sector

Having set out in some detail the severe and entrenched human rights abuses that Dutch banks are linked to through their finance for the cocoa sector - an admirable task in itself for a project in which the sector itself is a leading partner - what are the Dutch banks planning to prevent or mitigate these impacts? The report sets out three recommendations:

These recommendations are set out with impressive clarity regarding who will do what by when - in stark contrast to the output of the Increasing Leverage working group, for example. We hope other reports from the DBSA follow in these footsteps. But that said, are these indeed the right recommendations, and will they make a difference?

The first thing to note is that there is a lot of emphasis on conversation rather than action, particularly regarding the first two recommendations - conversations we need to see lead to concrete actions. The third recommendation is backed by a funding application, as set out at the stakeholder meeting, which gives reassurance that the parties are driving ahead, although they will have to show how a new multi-stakeholder approach adds value to the numerous such initiatives that already exist in this space.

However, the impacts set out in this paper seem to demand more urgent and concrete steps. After all, having taken stock of the extent to which they are linked to severe violations of core labour standards and other human rights impacts through their finance to the cocoa sector, nothing in this paper stops Dutch banks from continuing with business-as-usual. Due diligence approaches will be discussed, but no new cross-sector policy has been announced and no red lines for cocoa finance have been set.

We would have hoped that by collaborating through this unprecedented agreement, Dutch banks could come together to demand real changes from their clients, in exchange for keeping lines of finance open. For example, if audited child labour monitoring systems are effective and in place at some major traders and manufacturers, what is stopping Dutch banks from requiring all their large clients put similar measures in place within a realistic time-frame, with the threat of divestment as a sanction for non-compliance as a last resort - with similar measures for monitoring other human rights impacts?

Overall, this paper represents a credible effort to examine the structure and impacts of the cocoa value chain, and makes recommendations for addressing these issues. Its goal of making “a substantial contribution” to reducing the adverse impacts in the sector is ambitious, but the further conversations it recommends will need to lead to concrete demands, and transparent tracking of their implementation, if this mapping exercise is to eventually make a difference to cocoa growers and communities.