Home › Blog
Not rushing these things: The first Annual Report of the Dutch Banking Sector Agreement on Human Rights
By: Ryan Brightwell – BankTrack
2018-08-29 Share this page: 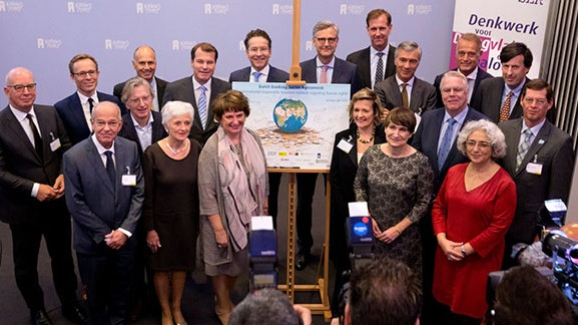 The Dutch Banking Sector Agreement is signed in The Hague, October 2016 . Photo: SER

Back in October 2016, ministers, bankers and civil society representatives got together in The Hague to sign the Dutch Banking Sector Agreement on Human Rights (‘DBSA’) - one of a series of “covenants” on responsible business conduct developed across various sectors in the Netherlands. The Agreement commits 11 Dutch banks to work together with other signatories from civil society, trade unions and government towards meeting their responsibilities to respect human rights, as set out in the OECD Guidelines and the United Nations Guiding Principles on Business and Human Rights (UNGPs). It is  ambitious and far-reaching, although not without its limitations - but are the banks meeting their commitments?

Earlier this month, almost two years after it was signed, the first major deliverables from the Agreement finally emerged. Four documents were published simultaneously: the first Annual Report of the initiative - only available in a hard-to-navigate “e-magazine” format; a progress report on Increasing Leverage; an analysis of the cocoa value chain; and a draft paper  on the palm oil value chain, for consultation.

Dropping this avalanche of reporting in one batch in mid-August is a genuine challenge for observers of the Agreement, risking that these reports do not get the attention they deserve. Rather than trying to digest these reports together, we focus in this article on the Annual Report and what it reveals about the implementation of the DBSA so far.

We only let you have it when it’s ready

The reputation of the Dutch for taking their time to get things right is something the local beer brand Grolsh played on in a memorable (and not entirely safe for work) British TV ad under the slogan, “we only let you drink it when it’s ready”. And true to form, the DBSA is taking its time. For example, the ‘remediation working group’ - set up to explore banks’ responsibilities for remediating human rights impacts of their finance - committed to report on its findings in April 2017, and although this deadline was later adjusted to October 2017, the report is not yet ready.

"Where's this guy's moustache? Why is he actually fixing the fridge? You can't rush these things, guys.".
Photo: Grolsch / YouTube

Bearing this in mind, we particularly looked to this first Annual Report for an up-front account of the Agreement’s achievements, shortcomings and lessons learned over 2017. And unfortunately, the report doesn’t exactly deliver on this. For example, while it includes a section on remediation, at no point does it mention that the working group is almost a year behind schedule.

And this is not the only delay. A commitment to consider extending the scope of the Agreement to include asset management “if pension funds, insurers and other institutional investors did not develop their own Covenant by the end of 2016” seems to have been dropped without explanation. An insurance agreement was signed in mid-2018, but there has been no assessment yet of the extent to which this insurance agreement may be relevant to the banks’ own asset management practices. The report does not mention this.

Similarly, the Value Chain Mapping working groups committed to deliver “a minimum of 2 and a maximum of 4 sector-specific value chain mapping exercises” for each year of the agreement. However, after over a year and a half, we have one completed mapping exercise and one very incomplete draft for consultation. The report does not mention the delay.

We are sympathetic to these delays - the subject matter is complex, and as with making Grolsch, you can’t rush these things. However, the delays do raise serious doubts about whether the Parties to the Agreement will be able to meet all their commitments within its three-year time frame. It’s disappointing that the Annual Report fails to meet baseline expectations by clearly setting out progress towards meeting these commitments.

Papering over the cracks

Rather weaker is the Monitoring Committee’s account of the progress of the multi-stakeholder working groups. On these, we read that “the Monitoring Committee understands that the members of these groups have worked hard and that serious efforts have been made to deliver these tools.” And little more. When we are looking to this report for a clear account of what has been achieved, against the benchmark of what has been promised, to only hear of “hard work” and “serious efforts” comes across like a lazy teacher writing an indulgent school report for their favourite pupil, and leads us to wonder why a deeper analysis was not presented.

The key commitment from the banks in year one of the Agreement is the delivery of a “complaint procedure which is publicly accessible for employees, clients and third parties”. On this score, the Monitoring Committee delivers the level of detail we expect, stating that “in the first year, 7 out of 11 banks had good to excellent procedure in place. The procedures are generally clear, well addressed and easily accessible. Three banks need to improve their procedures at one bank the process is delayed .”

The report provides hyperlinks to each bank’s complaints procedure - in most cases, a web page detailing where complaints can be directed, with some minimal details of how they will be handled (e.g. see ING, Rabobank and ABN AMRO).

This update to banks’ online complaints pages is a welcome, if not ground breaking, in that it clarifies how people affected by banks’ financed activities can raise complaints.  It clearly does not represent a formal grievance mechanism - and this was never promised: the original agreement included a footnote stating: “This complaint procedure is not a grievance mechanism as described under the OECD Guidelines and the UNGPs.” However the news announcement accompanying the Annual Report seems confused about this, opening its first paragraph by declaring that “many of the banks have improved their grievance mechanisms and made them accessible for non-clients as well.”

So are these grievance mechanisms, or are they complaints procedures which are not grievance mechanisms? And is this confusion a mere slip of the pen, or a deliberate attempt to muddy the waters on what entails an effective grievance mechanism as defined by the UNGPs? We’re calling on banks to ensure they establish or participate in grievance mechanisms which meet the UNGPs effectiveness criteria (as elaborated in our recent briefing paper on this subject), and statements like this add to the impression that banks are not sure what this responsibility means.

A step-change in urgency and honesty needed

While this Annual Report doesn’t say it, a recent broader assessment of the state of the Dutch sector agreements found that parties need to make more time and resources available if these agreements are to be a success. This certainly rings true for the banking sector agreement. But as well as more resources, this covenant needs a serious extra dose of transparency and Dutch directness. If the DBSA is to be a success, the Parties need to be up-front with themselves and others about what is going well and what is proving harder than expected, so that lessons can be learned.

We urged the Parties to the DBSA in a letter to the Agreement’s Steering Committee in March this year to publish the Independent Monitoring Committee’s report in full (with the exception of competitively sensitive information). There was no official response, and having seen the summary in this Annual Report, we repeat our request for this report to be published in full. We also call on the Parties to provide a clear evaluation of their progress towards all the deliverables promised in the DBSA, published as a corollary to this report, preferably with an account of priorities for the remainder of the Agreement’s timeframe and lessons learned through the process so far.

The DBSA represents an important model for how banks can work towards fulfilling their human rights obligations in partnership with government and civil society, that stands in stark contrast to the failed unilateralism of the Thun Group of banks. The Dutch government has committed to consider a regulatory approach if these covenants do not prove successful. Regulation and ‘voluntary’ action by the banks don’t have to be competing alternatives - they both have a role to play - but the multilateral approach certainly shows more promise than banks going it alone. That’s why we want to see the Parties to this agreement step up and make sure it succeeds.