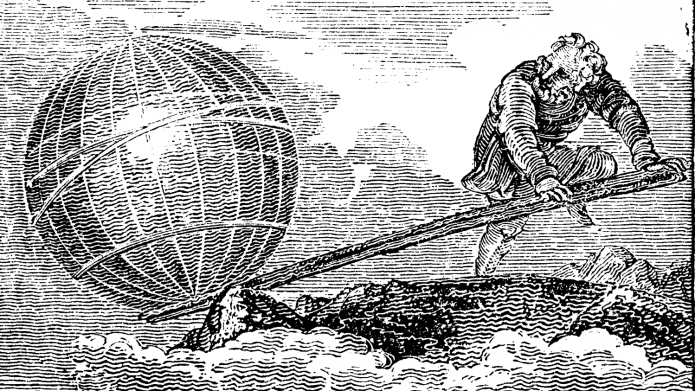 "Give me a place to stand and I will move the earth" - Archimedes, quoted by Pappus of Alexandria, AD 340 . Photo: Engraving from Mechanic’s Magazine (1824), from here.

In August this year the Dutch Banking Sector Agreement on Human Rights (DBSA) released its first annual report together with three other publications. This is the second in a series of articles examining these publications, and focusses on the Increasing Leverage paper.

With enough leverage you can move the world, as Archimedes told us. But how much leverage do banks really have to move their clients to avoid or address human rights abuses?

In a 2013 paper by the Thun Group, seven European banks argued that, given the competitive market they work in, they have much less leverage over clients than is commonly believed. This was something of a cop-out, BankTrack argued at the time: if banks’ leverage really is so limited then they should consider ways to increase it. So the DBSA has been astute in forming an ‘Increasing Leverage Working Group’ to consider how banks can best do this in practice.

Has the DBSA delivered on leverage?

The DBSA has not done a great job so far in clearly setting out its progress towards meeting its commitments, as we commented in our analysis of its first Annual Report. One of its initial commitments was to publish “a study on good practices of how to increase leverage” - initially by the end of 2017. (The timeline was later revised to “by the end of Q2 2018”).

We would like to be able to welcome the Agreement’s publication of a study which meets this commitment, and only two months behind schedule. However the published study describes itself as “Progress Report phase one”, and is intended only to give “an overview of the work carried out in 2017 by the working group that was set up ”. If this is ‘phase one’, it is also unclear what the scope and timescales for phase two look like, whether there are subsequent phases planned, and whether “a study on good practices of how to increase leverage” is still in planning.

So what does the paper have to say about how can banks increase leverage?

The paper begins by reviewing what leverage means (in Chapter 2) and how it is applied (Chapter 3). In doing so, it does well to centre the discussion around risks and impacts to people, contrasting this with “traditional understandings of business risk and materiality” and arguing that this creates a need for “non-traditional responses”.

It then references a framework of five categories for how a company can apply leverage, originally developed by Shift. These include traditional commercial leverage (e.g. use of contractual clauses); broader business leverage (less routine types of leverage that a company can exercise on its own, such as capacity-building); leverage together with business partners (e.g. other banks); leverage through bilateral engagement (e.g. with governments and civil society organisations); and leverage through multi-stakeholder collaboration. This framework, and the following discussion of how it can be applied in the banking sector, already prompts banks to widen their horizons beyond standard industry practice and to consider engagement with a much broader set of stakeholders.

Chapter 4 of the report then considers the roles that each of the parties to the DBSA can play in increasing leverage, including civil society organisations (CSOs), trade unions and governments alongside banks. CSOs can create awareness and mobilise leverage within banks, and CSOs and banks might coordinate their efforts so that CSOs’ public advocacy efforts might combine with bank engagement to effect change in certain areas. If this kind of cooperation seems far-fetched, it is not too different to the way in which CSOs and activist shareholders have joined forces to push for greater climate disclosure in the oil industry, for example. The report also suggests that the Dutch government, for their part, might help banks build leverage through encouraging cooperation between different Sector Agreements, of which the DBSA is just one.

But it is the role of banks that is central, and the suggestions for how banks might increase leverage are largely given in a lengthy appendix to the main report. This appendix takes the form of a written brainstorm, full of creative ideas provided unedited by the team of consultants commissioned by the working group, organised into 18 topics. Some ideas that stood out as interesting for us were:

Which concepts for increasing leverage will the DBSA prioritise?

Having generated this wealth of ideas, the report’s final chapter (Chapter 5) is titled “next steps”. At this point, the reader, hoping to learn which of the above concepts will be taken further, is left disappointed. The Working Group, it explains, “has not discussed, let alone tested” all the options suggested by the consultants, and so “would not be able to advise on the most appropriate and effective means of leverage under which circumstances”. This is presented as if the task of discussing 18 separate ideas for action is self-evidently beyond the capabilities of any reasonably well-resourced group of people. However, given the ideas were presented to the Working Group, and that it has been active for over a year, it seems rather surprising that discussing the ideas systematically was not considered a priority.

As it is, three opportunities for next steps are identified, although in the vaguest of ways. These are ‘organisational aspects’ (including ‘sharing experiences’ and ‘looking at individual cases’); improving access to reliable, current and relevant human rights information; and ’the commercial context’, which relates to the use of financial and legal incentives to encourage clients to improve their management of human rights. While this points to some possible interesting follow-up work, it is disjointed from the consultants’ 18 ideas for action, and passes up the clear opportunity to prioritise a group of these for further development.

This progress update provides a valuable set of ideas and suggestions, and we hope banks are inspired to take some of them forward. But it takes more than ideas and suggestion to move the world - a lever, after all, is a practical tool, and it is practical tools that are needed if banks truly want to increase their leverage, shift their clients’ behaviour and prevent human rights abuses. We hope phase two delivers such tools.