Home › Blog
Banco Santander takes a step on big oil, but what about big meat?
By: Sumeyra Arslan – BankTrack
2022-05-02
Nijmegen, The Netherlands
Contact: 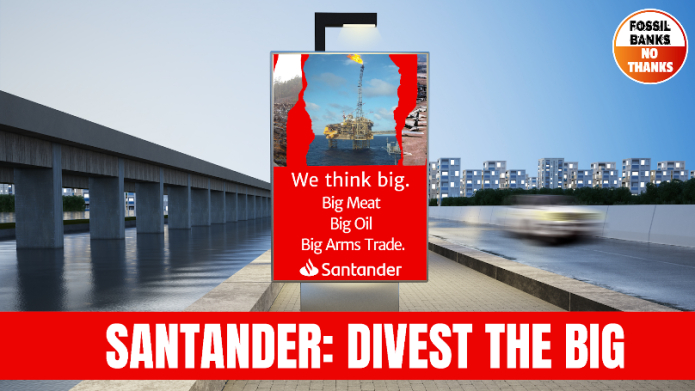 Big meat, big oil, big military: Spain's Banco Santander is a major financier of some BIG problems. It is the top banker of Brazilian meat processor JBS and one of the top 10 European fossil banks. So BankTrack and our Spanish partner Ecologistas went to the shareholders’ meeting on 1st April 2022 to push Santander to do better. Strikingly, just before the AGM, Santander published a new fossil fuel policy with some promising improvements. In this blog, we are setting out what happened at the AGM, the good and not-so-good of the new fossil fuel policy, and what Banco Santander needs to do next.

The ‘subvertising’ that appeared in Madrid, Spain, right before the AGM of Santander started. It emphasises the importance of phasing out big meat and big oil.

At the AGM, BankTrack asked whether Santander has plans to phase out financing for fossil fuel expansion on a timeline compatible with a 1.5°C degrees pathway. Santander’s answer was surprisingly confident. The board emphasised that the bank is among the top three providers of renewable energy project finance globally and that it supports its clients to transition to carbon neutrality. While of course financing renewables is an important step, as long as Santander does not also address its prominent position among financiers of fossil fuel expansion, it's mopping the floor with the tap running.

And strikingly, Santander did not say anything about the new fossil fuel policy it published just before the AGM, which takes steps to address exactly this disconnect. The new policy excludes financing for new upstream oil projects ánd clients (with an exception to allow finance dedicated to renewable energy projects carried out by oil companies), new projects or expansion of existing projects north of the Arctic Circle, tar sands, fracking, and coal bed methane; and companies, when those activities combined are a “significant part of their reserves” or form more than 30% of their activities.

These are significant improvements compared to the old policy. It shows Santander has embraced the conclusion of the IEA that reaching net-zero greenhouse gas emissions by 2050 means “there is no need for investment in new fossil fuel supply.” But it leaves gas projects and clients and midstream companies out of the scope of this exclusion.

It is crucial all banks stop financing fossil fuel expansion. By excluding upstream oil projects and new clients that engage in these projects, Santander becomes an example to many banks globally. Santander’s policy is more advanced than those of some other banks that recently moved to exclude upstream oil and gas projects (including Credit Mutuel, Commerzbank Danske Bank and ING), although it falls short of La Banque Postale, Triodos, Co-operative Bank, Ethica and further ethical banks, which exclude all finance for oil and gas expansion companies.

Brazil’s JBS is the largest meat company in the world. Its total deforestation footprint in six Brazilian states since 2008 was estimated to be at least 200,000 hectares (ha) in its direct supply chain and 1.5 million ha in its indirect supply chain. The company also has well documented links to slave labour and is embroiled in several major corruption scandals. The company’s net-zero climate commitment allows it to continue to source cattle from farms linked to illegal deforestation in the Amazon and other biomes until 2025 and JBS has not committed to eliminating deforestation from its entire supply chain until 2035, 24 years after its initial promise to do so. Finally, its climate commitment focuses primarily on its Scope 1 and 2 emissions, which JBS acknowledges represent less than 10% of its overall emissions. A worrying fact given that JBS is the largest emitter of greenhouse gas emissions in the meat and dairy sector and new research shows that the company’s emissions increased over 50% in the last five years, to now being equivalent to half the UK’s climate footprint.

Banco Santander pledged to reach net-zero financed emissions by 2050 and to align its portfolios to the 1.5ºC IEA scenario. The bank also claims to protect the Amazon Rainforest, which it recognises as critical to addressing climate change. And in its ESG policy, Santander states that it is committed to fighting deforestation, particularly in the Amazon, including through enhanced due diligence when providing finance to customers involved in farming and ranching in the Amazon. It expects beef processing clients in the Amazon to have a deforestation-free supply chain by 2025, including indirect cattle suppliers. While this very ambitious policy seems to be all that we need, it lacks execution. While huge companies are plundering the Amazon committing illegal activities and causing many human rights violations, Santander seems to only ‘expect’, ‘urge’ and ‘advise’ its clients to do better.

The bank has, since 2017, provided over US$ 800 million in finance to JBS. This financing of JBS is hard to square with Santander’s ESG policy. That is why at Santander’s AGM, BankTrack campaigner Henrieke Butijn asked the bank how providing financial support for a company with such a poor track record on climate and deforestation, and no serious plans to improve could be compatible with Banco Santander’s deforestation and climate commitments. She also asked JBS to be excluded from financing, on the basis of Santander’s requirement that beef processing clients in the Amazon need to have a deforestation-free supply chain by 2025 – a test that JBS fails.

The bank responded that Santander has the contractual power to declare early debt termination if illegal activities have been verified, but that it is unsurprisingly focused on working closely with clients ‘in a proactive way’ to make sustainable development in the Amazon Forest possible. It is alarming and dangerous for Santander to be focussing more on a ‘proactive way’ to cooperate with their clients rather than effectively regulating the compliance of its clients and dropping those that continually fail to live up to their promises on climate and deforestation.

In sum, there is still plenty of room for improvement. As the IEA has clearly stated in its latest report, there is no room for fossil fuel expansion; this includes no room for financing new oil ánd gas projects and (new and existing) fossil fuel clients. However, Santander’s latest fossil fuel policy only addresses upstream oil, allowing it to finance midstream projects like oil pipelines, which are crucial to allowing expansion of the oil industry. For example, Santander is one of the few European financiers of Total not to have excluded finance for the East African Crude Oil Pipeline. It also leaves room for the bank to continue financing new gas, which is out of line with a 1.5°C pathway, as the IEA has made clear. And lastly, the policy covers only new clients and puts no limitations on financing existing upstream oil clients, such as BP, which is expanding production in no less than 14 countries, and to which Santander has provided US$ 3 billion in finance since 2016.

While Santander has taken an important step with the new restrictions on upstream oil, if it is serious about addressing its impact on human rights, the environment and nature more broadly, it cannot continue to finance big meat companies like JBS. If the bank does not address these impacts in a holistic way, it will just be adding fuel to the fire while holding a small bucket of water.