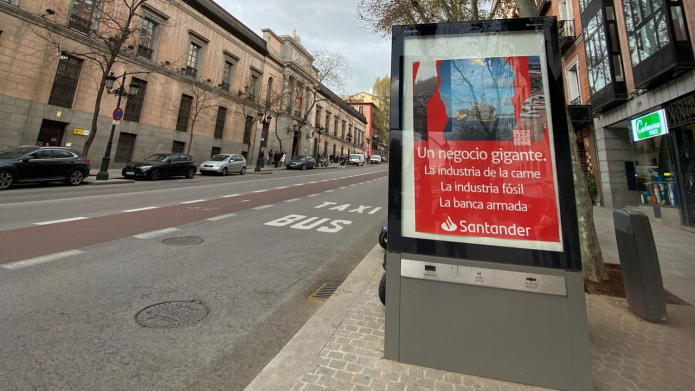 For a bank that talks big about its dedication to sustainability and tackling climate change, a closer look at Santander’s finances raises some questions.

Santander certainly thinks big. Big Meat. Big Oil. Big Arms Trade. At the Santander AGM today in Madrid, we’ll be asking about a number of the corporations financed by the bank, adding to public pressure from "subvertisers" who put up satirical posters in Madrid, ahead of the AGM.

Santander states that it is committed to fighting deforestation, especially in the Amazon. As a prerequisite for credit, the bank expects beef processing clients in the Amazon to have a completely traceable supply chain that is deforestation-free by 2025. Santander also claims that climate change is a key concern, with a similar commitment to “Net Zero” by 2050 that we have seen from many banks recently.

This raises the question: why does Santander provide finance to JBS, the largest emitter of greenhouse gas emissions in the meat and dairy sector, and with outsized deforestation in its supply chain?

A conservative estimate puts JBS’ total deforestation footprint in its direct supply chain at 200,000 hectares since 2008, an area far larger than Greater London. In March 2017, JBS was fined by the Brazilian government for buying cattle from illegally deforested areas of the Amazon.

Other glaring issues that should make a financier think twice about JBS include at least two farms the corporation sources cattle from that were found to have used slave labour, and links between its supply chain and encroachment on indigenous lands.

Our question to Santander, then, is how its commitments on net zero by 2050 and fighting deforestation are compatible with its poor track record on climate and deforestation? And what will it do to improve?

We have further trouble applauding Santander’s sustainability commitments when we consider its relationship to the fossil fuel industry. Alongside its commitment to “Net Zero” by 2050, the bank claims that it remains “fully committed” to the Paris Agreement, which includes a goal to limit warming, preferably to 1.5 degrees. The International Energy Agency recently reported that there is no room for new coal, oil and gas in a 1.5 degree world.

However, as the latest Banking on Climate Chaos report, released this week, shows, between 2016 and 2021 Santander provided $23 billion in lending and underwriting to 100 companies doing the most to expand the fossil fuel industry. These don’t seem like the actions of a bank that is sincerely committed to the Paris Agreement, or “Net Zero”.

In the same time frame, Santander pumped $42.9 billion into the fossil fuel industry as a whole. The bank is the seventh largest funder of fossil fuels in Europe. This financing includes $6.1 billion between 2016-2021 to Shell, one of the world’s most notorious and significant oil majors linked to a myriad of human rights abuses. BP PLC and TotalEnergies, two other oil majors linked to environmental harm, encroachments on human rights and misleading the public with their greenwashing, also feature highly on Santander’s portfolio. From 2016-2021, Santander provided BP and TotalEnergies with $3bn and $1bn respectively.

As Santander’s AGM begins, we also express support for partners in Spain who are holding Santander to account on its links to the arms trade. In fact, Santander is one the largest European funders of the top nine global defence companies, who have all exported arms to controversial countries and repressive regimes in the Middle East and North Africa region. As well as being a hugely polluting industry, the clear human rights implications of investing in corporations implicated in arms exports to these regimes should be reason enough for Santander to reconsider its financing choices.

We urge investors to pressure Santander today to take concrete steps in its policy and financial portfolio to sever ties with the companies and industries that so deeply compromise its professed commitments to climate, deforestation and human rights. We look forward to hearing the bank’s responses to our questions, and applaud those taking action in Spain today.