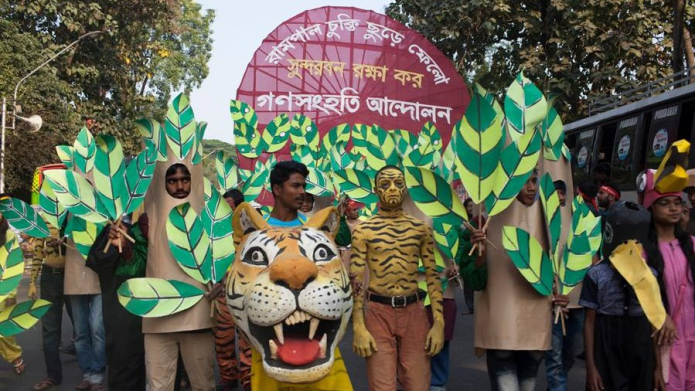 Five top international banks, Bank of America Merrill Lynch, Barclays, Citigroup, JPMorgan Chase and Standard Chartered, have today been urged by 53 groups from around the world to distance themselves from forthcoming bond issues for the Export-Import Bank of India (India Exim).

The groups have notified the banks that they would consider any engagement in underwriting or lead manager activities on behalf of India Exim as enabling the realisation of the Rampal coal-fired power plant in Bangladesh, unless India Exim pulls out of financing for the highly controversial, $1.6 billion project.

The open letter, addressed to the CEOs of the five banks, emphasises a UNESCO report recommendation published in October that the Rampal project should be “cancelled and relocated” in order to avoid irreversible damage to the Sundarbans mangrove forest, parts of which are a UNESCO World Heritage Site.

Bank of America Merrill Lynch, Barclays, Citigroup, JPMorgan Chase and Standard Chartered have performed underwriting and ‘lead manager’ services in previous bond issuances from India Exim, a state-owned export credit agency. The bank, which has yet to reach financial close on loan support to the Rampal project, has made one bond issuance already in 2016 with another one potentially to come before the end of the year.

“UNESCO’s ‘cancel and relocate’ Rampal recommendation to the Bangladeshi state authorities was unequivocal and stands as a stark reputation warning to any responsible investors tempted to involve themselves in the raising of funds for India Exim.

“Western private banks have correctly chosen not to implicate themselves in the appalling and unnecessary Rampal project via direct financing. Groups from India, Bangladesh and from around the world now call on Bank of America Merrill Lynch, Barclays, Citigroup, JPMorgan Chase and Standard Chartered not to put slim profits from India Exim bond arranging ahead of the priceless Sundarbans forest and the two million Bangladeshis whose livelihoods depend on its survival.”

Resistance to the proposed Rampal project is widening in Bangladesh. At the end of November, a peaceful mass rally of 15,000 demonstrators calling for the project’s cancellation gathered in the capital Dhaka, with groups from across Bangladeshi civil society planning further mass protests throughout the country in the new year.

The appropriateness of the Rampal project has also been questioned by a recent report, from the Institute for Energy Economics and Financial Analysis, which maps out a cheaper, cleaner and faster-to-implement alternative electricity plan for Bangladesh based on the country’s huge energy efficiency and solar energy potential.

1. See the open letter, signed by 53 groups including 350.org, Avaaz, Greenpeace India, Friends of the Earth International and Waterkeeper Alliance.

UNESCO’s concerns about Rampal and its impacts, based on a monitoring mission to the area earlier this year, are underscored by its further recommendation that the Sundarbans should be considered next year for inclusion on the World Heritage in Danger list if the Bangladesh government decides to proceed with the coal plant.

3. See the November 2016 report from the Institute for Energy Economics and Financial Analysis, ‘Bangladesh Electricity Transition: A Diverse, Secure and Deflationary Way Forward’.