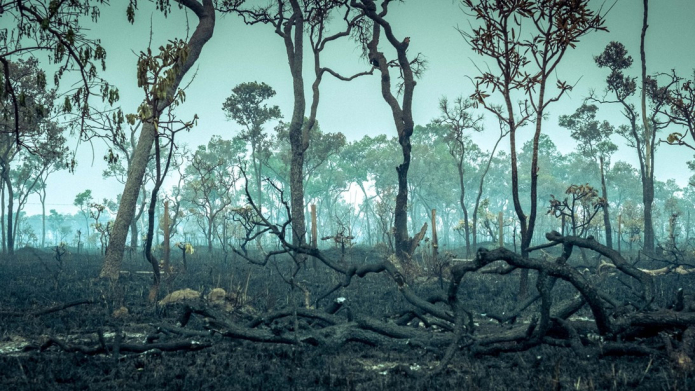 A new report from the Fair Finance Guide shows that the seven largest banks in Sweden continue to invest billions in soy and meat companies that contribute to deforestation in the Amazon and Cerrado. The report reveals that none of the banks have engaged sufficiently with the companies. This means that the banks contribute to climate change, violations of human rights, collapsing ecosystems, and long-distance animal transports.

Today, the Fair Finance Guide in Sweden and its partners, the Swedish Society for Nature Conservation and World Animal Protection Sweden, release the report Forests on Fire. It shows that the seven largest banks in Sweden invest in and finance 27 of 61 high-risk companies that produce, use or sell meat and soy, which are the main sectors that drive deforestation in the Amazon and the Cerrado in Brazil. The banks have invested in total SEK 9.2 billion in the companies and have provided SEK 2.3 billion in loans and underwriting to a handful of them over the past five years.

Among the high-risk companies are the global soy traders Archer Daniels Midland, Cargill and Bunge, the multinational food chain Carrefour, which sells meat from the Amazon, and the venture capital company Blackstone, which has major investments in a company that builds and operates infrastructure which facilitates the exploitation of the Amazon.

The report also assesses the banks’ engagement with three of the companies. The results were disappointing - none of the banks could demonstrate a proper engagement process, including time-bound targets. On the positive note, six of the seven banks participate in industry initiatives and have signed open letters to companies and politicians calling for actions to reverse the trend.

The report also shows that none of the banks in a meaningful way, have raised animal welfare issues with the companies. None of the seven banks even have guidelines against long and painful transports of animals.