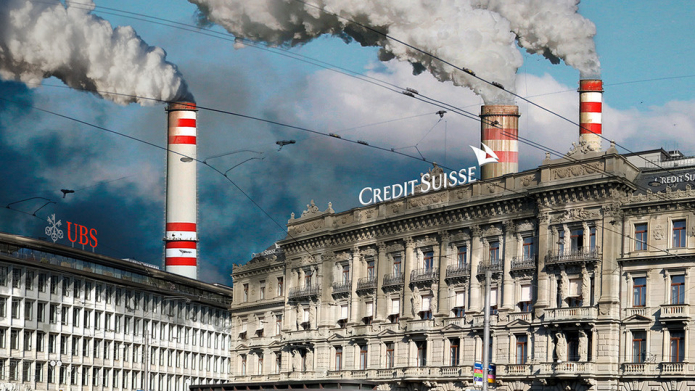 The Greenpeace report ‘’Still Wrecking the Climate’’ published today shows that Credit Suisse and UBS, despite their commitments to climate protection, have been financing fossil fuel companies with billions of dollars in the four years after the adoption of the Paris Agreement, and they do not shy away from financing particularly climate-damaging sectors like tar sands, fracking and coal.

As the evaluation of transactions with 101 companies from the coal, oil and gas sector shows, Credit Suisse and UBS have enabled the emission of 290.1 million tonnes of CO2 with their financing and services, totaling nearly USD 70 billion between 2016 and 2019. That corresponds to more CO2 emissions each year than was emitted by the entire population and industry in Switzerland. It is particularly disturbing that even companies that are developing new and extremely climate-damaging projects have been financed, even though the known reserves are already larger than could ever be burned.

"There is no place for such extremely climate-damaging fuels in a climate-friendly economy. The fact that the banks, despite their commitments to climate protection, provide funding to companies that even want to expand the use of such climate-damaging fuels, shows that their own guidelines do not work well enough. Politicians and regulators must now give banks clear guidelines and enforce them’’, says Asti Roesle of Greenpeace Switzerland’s climate and finance campaign.

Since the Paris Agreement, Credit Suisse and UBS have increased their lending to Glencore, even though this company’s expansive coal strategy does not match the banks’ officially targeted coal phase-out. At the same time, both major banks have financed the activities of oil major Total with USD 600 million, even though the company plans to significantly increase its environmentally damaging oil production from tar sands. It is not surprising that the debt financing guidelines established by the banks fail to have any effect, because it is simply inconsistent if project financing is e.g. no longer provided for the construction of a coal-fired power plant, but the same company continues to receive a general corporate loan.

Of the 101 fossil fuel companies that Credit Suisse and UBS finance, many lobby for the cancellation or weakening of planned or already existing climate protection regulation. Less than 5% of these companies follow science-based climate targets, which demonstrates that the “Engagement strategies” that banks use in dealing with fossil fuel companies are essentially ineffective.

Politicians need to help shape the financial centre of the future

According to Greenpeace Switzerland, the analysis clearly shows that compliance with the Paris Agreement by the actors of the Swiss financial centre should be a top political priority. The document with recommendations, called “So wird der Schweizer Finanzplatz klimafreundlich”, published jointly with the report, provides recommended measures and detailed steps towards a sustainable financial centre in Switzerland.

These steps include, first and foremost, an immediate end to financing extremely harmful fossil fuels. For financial flows in the global economy, financial actors need to develop and implement a scenario-based transformation path. The implementation should be guided by regulatory measures from the State.