Home › News
COP26: when will net-zero finance say no to fossil fuel expansion?
Huge pressure from civil society around COP26 pushed the financial sector net-zero alliances to acknowledge that they must tackle fossil fuels
By: Reclaim Finance
2021-11-19 Share this page: 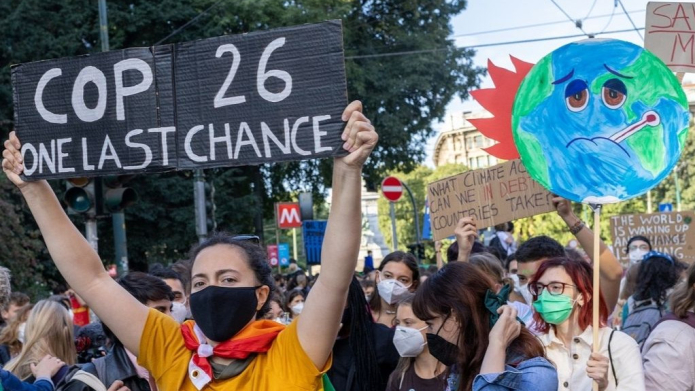 Huge pressure from civil society around COP26 pushed the financial sector net-zero alliances to acknowledge that they must tackle fossil fuels. This could spark a shift: the alliances have up to now been focused on gaining new members while underestimating the importance of developing strong guidelines and ensuring that these are followed by their members. Mark Carney was proud to announce during the first week of COP26 that the Glasgow Financial Alliance for Net Zero (GFANZ) that he chairs now has more than 450 members controlling over US$ 130 trillion in assets who have committed to halving the emissions from the companies they finance by 2030, on their way to reaching net zero by 2050. However a close look at the guidelines and criteria of the GFANZ alliances of investors, banks and insurers shows that they are completely inadequate to reaching this goal over the next eight years. While a few financial institutions have taken the lead and announced ambitious measures, we are still miles away from seeing adequate ambition across the members of GFANZ.

A (late) recognition of the importance of fossil fuels

It was about time. In the first days of COP26, the financial sector’s net-zero initiatives grouped together under the GFANZ umbrella (1) finally acknowledged the elephant in the room: fossil fuels. After being widely criticized for their weak criteria, GFANZ and two of its key member alliances published new documents admitting the need to act on fossil fuels.

Let’s not get carried away: at this point, these are very timid steps.  Admitting the need to act on fossil fuels must pave the way for bolder requirements.  Net-zero alliances now urgently need to publish robust and mandatory guidelines on how to end support for fossil fuel expansion.

Strategies and policies are not aligned with climate science

Unfortunately, the financial sector’s net-zero initiatives are not giving their membership the blueprints they need to tackle coal, oil and gas. Currently, none of the initiatives require ending investments in fossil fuel expansion, the red line drawn by the International Energy Agency to stay under 1.5°C. Most members do not have corporate strategies and policies aligned with climate science. NZAM is a good example of this contradiction: speaking up on the need to address all fossil fuels and yet, still lacking even adequate guidelines on ending investments in coal. Among the 130 members of the NZAM currently covered in Reclaim Finance’s Coal Policy Tool, only 13 exclude finance for a majority of coal developers, and less than a half (51) have one or more criteria to exclude a part of the coal sector. Even the AOA, considered the most ambitious of the alliances, still allows under its coal position paper continued investment in companies developing the approximately 195 coal plants under construction around the world.

Until GFANZ and its member alliances publish robust guidelines requiring its members to stop supporting fossil fuel expansion, we are left to rely on commitments made by individual financial institutions. And up to now, there have been very few. While Belgian bank KBC has announced it will no longer finance any new oil and gas development and exploration projects, and a few big banks and investors now exclude coal developers (4), commitments are still few and overwhelmingly weak and no way near what is needed to address the climate emergency.

Flawed decarbonization targets will not be enough

One of the only requirements for members of the net-zero alliances is to set decarbonization targets for their portfolios. But there are huge flaws in how this is being done. The recent scandal around HSBC attempting to weaken the criteria of the Net-Zero Banking Alliance is also revealing as to the seriousness of GFANZ members’ commitments to halve their emissions by 2030. On the investor side, according to the NZAM’s November 2021 progress report, the 43 of their 220 members who have set targets have so far only committed to manage 35% of their assets in line with net zero, undermining significantly their potential to reduce emissions (5). UBS AM announced targets covering just 20% of its assets under management. LGIM’s target covers 40%. And while 13 asset managers have announced targets covering all of their assets, most (and none of the biggest ones) have not.

Furthermore, members are allowed by NZAM to apply their fossil fuel phase out policies only to the portion of these assets committed to net zero (6). This is extremely problematic, as many of the biggest asset managers are refusing to set any fossil fuel exclusion criteria for their huge and rapidly growing passive index funds. Eight big NZAM members – including UBS AM and BlackRock – have more than 60% of their total assets under management with absolutely no restrictions on coal (7). This is another illustration that the GFANZ leadership is not bringing adequate solutions to the problem (8): credible decarbonization targets should be supported by clear and robust policies phasing out support for fossil fuels.

Financial institutions can no longer avoid tackling the elephant in the room: the fossil fuel industry and its expansion plans. Their flagship net-zero alliances are slowly recognizing publicly that their credibility goes hand in hand with robust fossil fuel phase-out policies. A key challenge ahead for GFANZ and its alliance members is for them to identify and insist upon strong fossil fuel policies – and to apply sanctions (including removal from the alliances) to financial institutions which don’t align with climate science and keep supporting fossil fuel developers.