This profile is no longer actively maintained, with the information now possibly out of date
Send feedback on this profile
Download as PDF By: BankTrack & Foundation Development YES Open-Pit Mines NO
Created before Nov 2016
Last update: 2020-12-30 00:00:00 Contact: 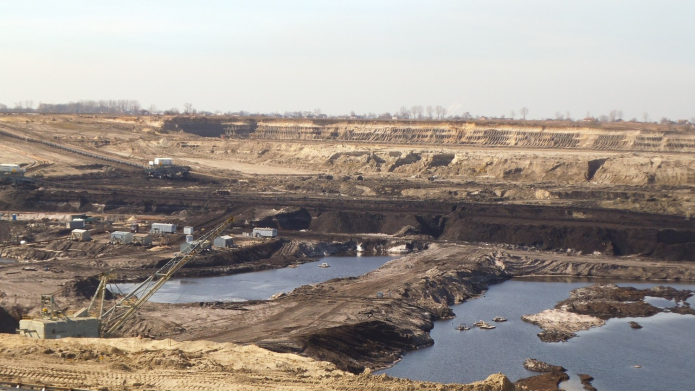 Tomisławice open-pit lignite mine, the last mine to be opened by ZE PAK in 2009 and, together with another ZE PAK lignite mine, responsible for damage to the biggest lake in the area – Lake Gopło – and the partial drying up of Poland’s sixth largest river. Photo: Renata Walczak

ZE PAK is involved in the mining of lignite coal, and energy generation and distribution primarily based on lignite-fuelled power plants.

ZE PAK subsidiary PAK Kopalnia Węgla Brunatnego Konin SA has plans to develop the Ościsłowo open-pit lignite mine. For construction of this mine project to go ahead, 223 hectares (ha) of fertile agricultural land in Ślesin commune, 2 ha in Skulsk commune and 100 ha in Wilczyn commune would need to be destroyed. The currently proposed variant of the project would also require the destruction of 22 ha of a 5500 year old burial mound of a pre-Slavic culture. Morover, more than 560 people would need to be resettled and 13 settlements and villages would have to be destroyed. Forty-seven water wells and 1580 ha of land would disappear, with impacts extending to lakes, rivers and to local agricultural production. In total more than 5000 people would be impacted directly or indirectly by the Ościsłowo mine – as of the end of 2011, these three communes were inhibited by 25,500 people with 1780 economic entities also registered in them.

ZE PAK is also pursuing the development of an open-pit mine at the Dęby Szlacheckie deposit in the commune of Babiak. Roughly 5000 people and 385 small and medium companies would be directly or indirectly affected if the mine advances due to impacts on water availability and dust impacting rural areas in the vicinity of the proposed mine. As of now the planning process is halted following the overwhelming rejection of the plans in a local referendum in June 2015 – over 90% of the local population voted 'no'.

The Oczkowice deposit in the region of south-west Wielkopolska is the biggest and most controversial of ZE PAK's proposed lignite mining ventures. At risk are 123 villages which would be destroyed if extraction were ever to take place, with potentially many more settlements potentially impacted by sharply falling water levels. The local terrain has some of the best soil in the country and is renowned as Poland's 'breadbasket', with companies such as Heinz sourcing their agricultural produce from the region. Indeed, businesses have created an association called Business for Ecology (Przedsiębiorczość dla Ekologii) to protect themselves from ZE PAK's planned mine.

Existing ZE PAK lignite power plants emitted 10.86 million tonnes of CO2 in 2017 and the open-pit mines belonging to the company extracted 11.67 million tonnes of lignite (19% of Poland's production) causing significant damage to human health. ZE PAK operations pose a major danger to the environment and local people, as they contaminate both air and water (rivers and lakes) with significant amounts of mercury, cadmium, copper, lead and other heavy metals.

An analysis prepared in 2013 shows that the air pollution emitted by ZE PAK annually contributes in the territory of Poland to: approximately 180 premature deaths, approximately 250 cases of chronic bronchitis in adults, approximately 1,600 cases of bronchitis in children and approximately 72,000 sick days. The external health costs of ZE PAK in 2013 were estimated at between PLN 3bn and PLN 6bn, equivalent to between 13 and 25 times the net profit of the company in that year.

Emissions into the air from only the Ościsłowo and Dęby Szlacheckie deposits – taking into account only the open-pit mines (if they are realised), and excluding the power plants in which lignite would be burned – would annually contribute in the territory of Poland to: approximately 20 premature deaths, approximately 90 cases of chronic bronchitis in adults, approximately 600 cases of bronchitis in children and approximately 9,000 sick days. A study has estimated that the health costs resulting from premature deaths will amount to a total of between PLN 1.1bn and 1.6bn for the entire period of the Ościsłowo mine’s operations and a minimum amount of PLN 2bn for the extraction in the Dęby Szlacheckie deposit.

Since lignite has been mined, the amount of water pumped out in Wielkopolska (12 billion m3) has amounted to over 18 times as much as there is in lake Śniardwy (660 million m3), or, to put it differently, to over 70% of the total volume of all the lakes in Poland (17 billion m3). The necessity to dehydrate deposits by the lignite mines in Pątnów, Tomisławice and Drzewce has caused the creation of three large depression cones, lowering the groundwater levels, which negatively affects ecosystems and farming. The plans for the Ościsłowo open-pit mine also require significant dehydration works.

Furthermore, ZE PAK's planned open-pit mines at Ościsłowo, Piaski and Dęby Szlacheckie will have a significant impact on Natura 2000 sites, which also means that they require the European Commission’s Directorate General Environment to green light the investment plans. ZE PAK's existing open-pit Tomisławice mine is the subject of the longest ongoing investigation at the Directorate General Environment due to the impact of the mine on the Natura 2000 site of Lake Gopła and for its violation of EU directives. The Commission’s final decision on this case is expected in 2018.

ZE PAK SA - an energy concern, producing energy mainly from lignite so far, has decided to stop its coal mining and electricity produced from coal by 2030. See the company's press release here.

Power and mining complex ZE PAK failed to secure an environmental assessment for the planned construction of an open-pit mine in Oscislowo and will appeal against the decision issued by the regional environmental protection head in Poznan, the company said in a market filing (source PAP Biznes).

There are no projects active for ZE PAK (Zespół Elektrowni Pątnów-Adamów-Konin) now.
on record

Commerzbank tolerates financing of the coal energy sector in Poland

Ościsłowo open-pit mine. Protests at the environmental authority in Poznań (Polish)

Poland wants prosecutors to investigate mine sale to ZE PAK

With no support system, ZE PAK is packed to go (PL)

Beginning of the lignite bust in Poland

A mine too far

Stop Kopalni in Southern Wielkopolska is an NGO focused on stopping the Oczkowice lignite open-pit mine.

Association Eko Przyjezierze is the main local NGO which has been resisting open-pit mines since 2007, and is an official legal party to the Ościsłowo EIA procedure.

Greenpeace Poland is particularly focused on stopping the Ościsłowo open-pit lignite mine project and is an official party in the Ościsłowo EIA procedure.