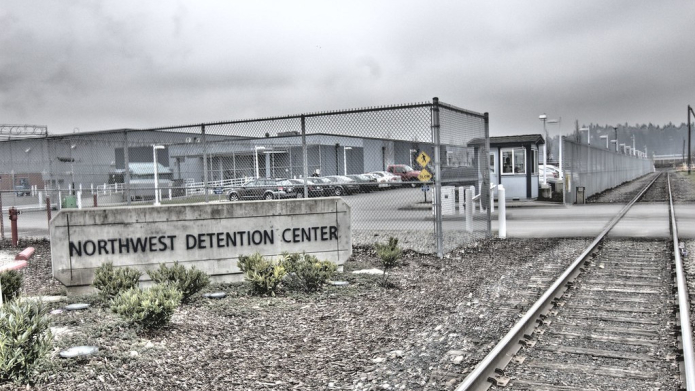 Mistreatment of detained persons The GEO Group, together with CoreCivic, is one of the major managers of Immigration and Customs Enforcement (ICE) detention centers. These companies systematically use detained immigrants as a source of cheap forced labour; are responsible for family separation and inhumane conditions at their detention centers.

The Department of Homeland Security Office of Inspector General, an independent watchdog agency that oversees ICE, issued a damning 2017 report documenting widespread abuse at ICE detention centers. It found these violations “undermine the protection of detainees’ rights, their humane treatment, and the provision of a safe and healthy environment.” Nearly one in four people report being victims of some type of abuse or aggression during their apprehension. A 2018 study found that for-profit detention facilities generate 175% more grievances than government-run facilities. Private prison companies have perverse incentives to make business decisions that negatively impact people being detained.

The GEO Group was found to be running "processing centers" in California where inspectors reported "bedsheets braided into nooses, inadequate medical care and detainees who were improperly segregated and shackled."

Deaths at detention centers Since 2010 ICE has reported a total of 74 deaths in immigration dentention. A 2018 report found that medical experts have determined that medical care lapses contributed or led to 23 deaths in 19 different detention centers since March 2010. Most of the Detainee Death Reviews that were examined since 2010 include evidence of dangerous and subpar medical care practices. At GEO Group’s Adelanto ICE Processing Center in California, seven suicides have been attempted between December 2016 and October 2017.

Family detention and separation In April 2018, the then Attorney General Sessions announced a zero tolerance policy under which the Department of Homeland Security (DHS) will refer all migrants who enter the U.S. without authorization to the Department of Justice for criminal prosecution. As a result, the government separated more than 2,000 children from their parents at the border during the period of April to June. In June 2018, President Trump signed an Executive Order intended to halt the separation of families. However, the order instructs DHS to detain 'alien families' together throughout the pendency of criminal proceedings and immigration proceedings. The Border Patrol has temporarily halted the referral for criminal prosecution of parents arriving with children, but there is no procedure currently in place to reunite the thousands of families already separated. Detained families including their children are still held at detention centers run by Corecivic and the GEO Group, despite for example the American Academy of Pediatrics recommending that no child should be placed in detention due to the risk of psychological trauma and long-term mental health impacts.

Shareholders of the GEO Group have issued a resolution that would prohibit the company  from housing immigrant detainee children or parents who have been separated from each other by U.S. government officials.

In May 2019 twenty-six immigrant fathers and sons sued the GEO Group, alleging that armed men swarmed their rooms in a Texas-based detention center and used excessive force to separate them, in violation of a nationwide preliminary injunction against family separations.

Child detention The Immigration and Customs Enforcement contracts with several facilities to detain families with children. The General Accounting Office reports that these three facilities have a combined capacity of 3,326 people. Active family detention centers include the Karnes County Residential Center in Texas, run by the GEO Group. The facility opened in 2012, and was designated a family residential unit in 2014. The facility can hold 830 people and was 66% full in early June 2018. In March 2019, ICE moved to repurpose the Karnes County facility to primarily hold adult women.

Riots At several GEO Group facilities prisoners have rioted against poor conditions. For instance in 2017, a facility-wide, eight-hour riot broke out in GEO Group's facility in Hinton, Oklahoma. Four hundred of the 1,940 federal inmates refused to leave the recreation yards and took control of a building. Three guards suffered injuries and two were taken hostage. Regaining control required the intervention of eight law enforcement agencies to secure the perimeter to prevent escapes. Tear gas and pepper spray were employed to regain control of the prison.

Other private companies Private prison companies like GEO Group and CoreCivic are responsible for both construction and management of facilities, but many services within a detention center are also handled by private contractors. Detainees are charged for all kinds of services and have to use for-profit money transfers, like Western Union or Global Tel Link, to pay for them. Phone companies can charge prisoners as much as USD 25 for a 15-minute phone call. Health care, ankle monitoring, drug testing and food services are outsourced to companies through lucrative contracts.

Lobbying In 2004, GEO Group spent USD 120,000 on federal lobbying. By 2016, it was spending USD 1.2 million. Fellow private prisons giant CoreCivic spent nearly USD 10 million between 2008 and 2014 just to lobby the House appropriations subcommittee that controls immigration-detention funding. Together, according to the Migration Policy Institute, the two corporations dished out a combined half-million dollars to Trump’s inauguration committee. A report in The Daily Beast stated, "In essence, immigration advocates say, the detention corporations pay Trump and his congressional allies, whose enthusiasm for treating immigration as a crime ensures delivery of a growing population of captives to companies that pay them far below a minimum wage."

UN Convention against Torture and Other Cruel, Inhuman or Degrading Treatment or Punishment
UN Guiding Principles on Business and Human Rights

These six banks, plus a further four - Fifth Third Bank, HSBC, Regions Bank and TD Bank - have participated in underwriting bonds from 2016 to 2018 totalling USD 1.15 billion. See below for more details.

Fifth Third Bank, BNP Paribas, SunTrust Bank, JPMorgan Chase, Wells Fargo and Bank of America have since announced that they will no longer finance companies that operate private prison and detention centers.

American Gulags - Communities across the country push back on immigration prisons

SunTrust is the latest bank to stop lending to detention centers

Bank of America Will Stop Lending to Private-Prison Firms

Shutting down the profiteers

Why and how the Department of Homeland Security should stop using private prisons
2016-09-30 00:00:00 | American Civil Liberties Union
other documents

Concerns about ICE Detainee Treatment and Care at Detention Facilities

The Landscape of immigration detention in the United States