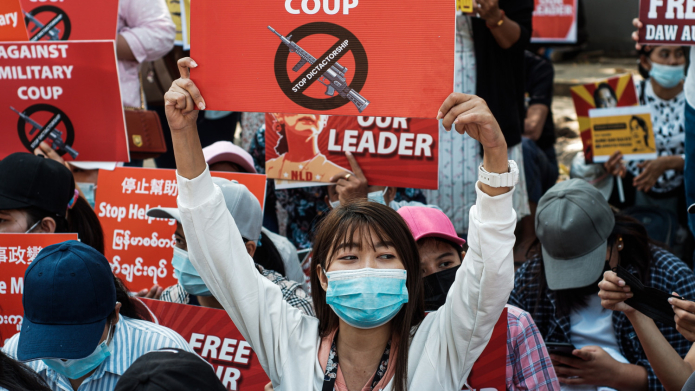 According to the Central Bank of Myanmar’s 2018-19 annual report, the most recent available, Mizuho is the biggest foreign bank in Myanmar by assets, accounting for over 16% of the foreign banking sector. Sumitomo Mitsui Banking Corporation is second largest, and MUFG is fifth largest.

The three Japanese banks were among nine international banks that in 2015 pledged to provide US$75 million each to obtain a license to serve foreign investors in Myanmar.

The provision of finance, investment and services ultimately results in Japanese financial institutions playing an important role in propping up the military junta and contributing to the continuation of the deadly attempted coup and the Myanmar military’s atrocity crimes.

These findings follow a report published in April 2021 by BankTrack and Justice For Myanmar, which revealed that 19 banks invested over US$65 billion in companies with ties to the Myanmar military cartel. Among many other banks, we noted that Japan’s big banks play an important role as investors, with Sumitomo Mitsui Banking Corporation, Mitsubishi UFJ Financial Group and Mizuho Financial Group together investing more than US$16.9 billion in companies either having direct relationships to the Myanmar military, military-controlled businesses or to state-owned companies under the control of the military junta.

On February 1, 2021, the Myanmar military junta attempted a brutal and illegal military coup. Millions took to the streets in a mass, democratic uprising and government staff stopped work, joining the Civil Disobedience Movement.

The military junta responded with a nationwide campaign of terror. As of 20 December 2021, more than 1,300 people have been murdered by junta forces, including children, and more than 11,000 people have been arrested, according to the Assistance Association for Political Prisoners (Burma). The junta’s indiscriminate airstrikes and shelling have killed civilians, destroyed communities and caused mass displacement.

Some of the junta’s recent crimes include the murder in custody of photojournalist Koe Soe Naing, the intentional ramming of peaceful protesters with a car that killed five, and the rape of two Chin women, one of whom was pregnant.

These violent attacks have amounted to “probable crimes against humanity and war crimes” according to the UN Special Rapporteur on the situation of human rights in Myanmar.

According to international legal experts, the Myanmar military junta is a terrorist organisation under national and international law. The junta’s terrorism is enabled by a vast network of businesses. Sumitomo Mitsui Banking Corporation, Mizuho Bank and Mitsubishi UFJ Financial are major nodes in this network and must act urgently to cut their links to the terrorist junta, in accordance with their international human rights responsibilities.

Mytel is integrated into the Myanmar military, sharing and maintaining infrastructure of the army’s Directorate of Signals, building communications infrastructure on military bases and enabling military surveillance. The business is also lucrative, projected to earn over US$700 million for the Myanmar military over 10 years, although its bottom-line has been hit hard by a mass boycott since the military’s attempted coup.

MUFG provides corporate loans totalling approximately US$73 million to Viettel Global Investment, according to Viettel Global Investment financial reports documented in the report Nodes of Corruption. In 2017, MUFG granted a loan to Mytel shareholders totalling VND835.52 billion, equivalent to US$37 million. The loan is tied to “network development” in Myanmar, directly benefiting the Myanmar military at a time when they were carrying out a campaign of genocide against the Rohingya and war crimes and crimes against humanity against other ethnic communities.

In addition, Telecom International Myanmar’s 2019 financial statement, leaked to Justice For Myanmar, shows that the company has cash and cash equivalents deposited with Mizuho Bank, MUFG and Sumitomo Mitsui Banking Corporation. These banks are facilitating payments for Mytel, supporting one of the Myanmar military’s key strategic businesses.

We asked the three banks if they still hold accounts for Telecom International Myanmar. Mizuho Financial Group replied, “Unfortunately, we are unable to refer to individual transactions from the perspective of confidentiality, but we are closely monitoring the situation in Myanmar, and we will continue to take appropriate measures based on our ‘Human Rights Policy’.”

Mitsubishi UFJ and Sumitomo Mitsui Banking Corporation did not respond.

Mizuho Bank and Sumitomo Mitsui Banking Corporation are co-financing the Y Complex project, a US$320 million mixed-use real estate development on land leased from the Myanmar army’s Office of the Quartermaster General (QMG).

Japanese companies, including Daiwa House Industry subsidiary Fujita Corporation, Tokyo Tatemono and the Japanese government, private sponsored infrastructure fund Japan Overseas Infrastructure Investment Corporation for Transport & Urban Development (JOIN), pay over US$1.8 million in rent in US dollars to the QMG annually, which could violate US sanctions if they are found to be materially assisting a sanctioned entity.

The policy-based financial institution Japan Bank for International Cooperation (JBIC) and the banks Sumitomo Mitsui Banking Corporation and Mizuho Bank are co-financing the project through a US$144 million loan.

In 2016, Sumitomo Mitsui Banking Corporation reiterated its participation in the Thilawa SEZ, providing deposits and loans.

Bilateral cooperation was extended in 2020, with a loan agreement of JPY47.94 billion between the JICA and Myanmar’s then civilian government. The loan will finance the Yangon-Mandalay Railway Improvement Project Zone and a third phase of infrastructure development in the Thilawa SEZ.

On many occasions, Japanese banks have provided loans to JICA, which risk benefiting the Myanmar military junta and its conglomerates, and can result in contract agreements with companies such as the military conglomerate Myanmar Economic Corporation.

In 2019,  Chiyoda Corporation - an integrated engineering company - benefited from loans from Japanese banks due to its difficult financial situation. Following the company’s “Revitalization Plan”, a large loan of JPY180 billion was agreed, including a subordinated loan of JPY20 billion from MUFG Bank. Chiyoda Corporation operates a joint venture, Chiyoda and Public Works Co. Ltd. (CPW), with  Myanmar’s junta-controlled Ministry of Construction.

Chiyoda Corporation began its business in Myanmar in 1997, under the former military dictatorship. Since that time, CPW has worked on projects that have benefited the Myanmar military and harmed communities and the environment, including the Letpadaung Copper Mine, the Kalewa Coal Mine, special economic zones and the expansion of a brewery owned by the military conglomerate Myanma Economic Holdings Limited (MEHL).

CPW currently operates the Prime Hill Business Square, an office building that used to house the Ministry of Construction.

Hong Kong and Shanghai Hotels Limited stated recently that it is “reassessing its project in Myanmar's largest city in the aftermath of the military coup and continuing bloodshed that has thrown the country into turmoil” and has suspended the project for one year. The project poses a serious human rights risk if land lease and other revenue payments to junta-controlled entities continue.

Wilmar International is linked with the Myanmar military junta, after being contracted in 2014 to develop a port in Thilawa. This development is a build-operate-transfer agreement with the Myanma Port Authority, a Myanmar state agency under the Ministry of Transport and Communications. Myanma Port Authority is closely linked to the military conglomerate Myanma Economic Holdings Limited, and the two entities have shared directors. Wilmar International has received a US$ 840 million syndicated loan facility from seven banks including Mizuho Bank, MUFG Bank, and Sumitomo Mitsui Banking Corporation. This syndicated debt is part of a first five year credit facility of US$540 million, and a second five-year credit facility of US$300 million.

In the oil and gas sector, Mizuho Bank and Sumitomo Mitsui Banking Corporation are also key creditors for a US$ 10 billion credit facility agreement with the Royal Dutch Shell PLC. The multinational oil company has a 45% interest in the A-7 offshore block, in partnership with Woodside and Myanma Oil and Gas Enterprise (MOGE), under the Ministry of Electricity and Energy. Exploration is currently suspended but could be a lucrative future source of revenue for the junta if it resumes. MOGE is the biggest source of foreign revenue for the Myanmar military junta.

By continuing to provide finance to companies with ties to the military junta, Japanese banks are contributing to the atrocity crimes being perpetrated by the military. Myanmar’s military junta is under a broad umbrella of international sanctions which reflect the gravity of the situation.

Under international frameworks such as the OECD Guidelines and UN Guiding Principles, both financial institutions and companies are expected to consider responsibly and immediately disengaging from operations that have severe human rights impacts. Banks must take urgent action to stop contributing to the Myanmar military’s atrocity crimes.

Oil and Gas Extraction
There are no companies active for this item now.
on record