Home › Blog
In the balance: Why European due diligence legislation must cover financial services
By: Giulia Barbos – BankTrack
2023-01-16 Share this page: 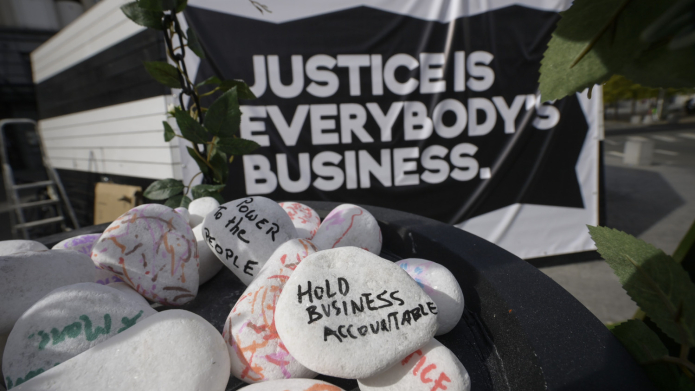 Blog by Giulia Barbos, Human Rights Campaigner and Policy Researcher at BankTrack. Originally published on the Business and Human Rights Resource Centre, as part of the Towards Mandatory Human Rights Due Diligence blog series.

Recent progress on the European Union’s Corporate Sustainability Due Diligence Directive means ‘CSDDD’ – or ‘CS-triple-D’ – is the acronym on everyone’s lips in the business and human rights world. This proposed mandatory environmental and human rights due diligence legislation has the potential to be a game-changer. However, recent moves from the EU Council to make inclusion of financial services optional for member states risk undermining its impact, given both the scale of the sector’s impacts and the state of banks’ current human rights commitments.

The latest Global Human Rights Benchmark from BankTrack, published in November 2022, revealed the world’s largest commercial banks are still consistently failing to fully implement their human rights responsibilities as set out in the UN Guiding Principles on Business and Human Rights (UNGPs). The Benchmark, BankTrack’s fourth assessment of the sector’s human rights performance, underlines the need for legislation which sets a level playing field for banks; is in line with the UNGPs; and extends to the whole ‘value chain’ - including the impacts of bank finance.

Overall, the Benchmark found none of the 50 banks assessed are fully meeting their responsibilities. The scores of the highest performers – Citi in the US, Japan’s Mizuho, and Australia’s Westpac – indicate they implement less than 70% of the responsibilities in the UNGPs. And it’s of great concern to see major players from Europe and the US like JPMorgan, Commerzbank and Groupe BPCE / Natixis languishing at the bottom of the table, with less than a quarter of the available points.

However there are some encouraging findings. The average score has risen from 4 to 5 points out of 14 since the last assessment in 2019, and by now most banks covered have clear policies in place committing them to respect human rights. There are also improvements in human rights due diligence, which half of the banks say they are carrying out at least to some extent, although only a third – 18 out 50 banks – make it an ongoing process applied to all aspects of finance. This progress risks being jeopardised if, as has been proposed, the EU’s CSDDD limits the requirement to carry out due diligence to a one-off check at the start of a financial relationship.

Last month’s COP15 negotiations on biodiversity put banks such as Bank of Montreal (BMO) and Royal Bank of Canada in the spotlight for their links to violations of Indigenous peoples’ rights. Our Benchmark confirms that consulting potentially affected rights-holders is a major gap in current bank practice. Only 22 banks out of 50 include some form of stakeholder consultation in their due diligence process, and for the most part affected people are not included. Only three banks incorporate any considerations on human rights defenders in their policies and public disclosures.

It is illuminating to investigate beyond banks’ policies and reporting – what they say they do – and see what banks actually do when severe violations occur. Our Benchmark analysed 152 instances in which banks were approached for a response on human rights impacts and risks linked to their finance. This included most recently through ties with the Myanmar junta, links to Rio Tinto’s Jadar lithium mine in Serbia, and through finance for companies operating in the Occupied Palestinian Territory. Of these 152 instances, banks responded in 91 cases, but in the majority of cases they did not respond to the substance of the issue. Banks only set out specific actions – such as engagement – in 27 cases, or around 18% of the total.

While some banks, including the 12 we identified as “front-runners”, have made substantial progress towards fully implementing their human rights responsibilities, 11 years on from the endorsement of the UNGPs the need for mandatory rules is clearer than ever. Effective legislation could drive up standards within the sector. In the current debate on whether to include financial services in the CSDDD at all, our Benchmark’s results – together with the variety and severity of impacts banks are linked to – support the view that enshrining the financial sector’s responsibilities into legislation is crucial to protect people and the planet from bad business.