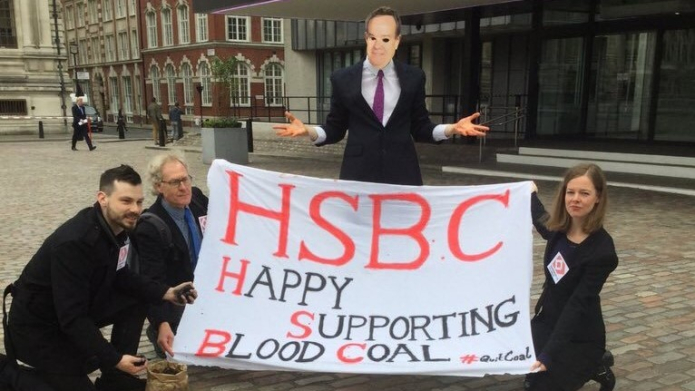 Following a Move Your Money campaign, AGM interventions from campaigners earlier this year, and extensive NGO consultations, HSBC’s updated Metals and Mining policy emerged last month – and on the day of the US election results! If the timing doesn’t suggest a bank that is looking to grab headlines for its environmental leadership, neither do the contents.

That’s not to say there is no progress here – the new policy now includes the word ‘coal’, which was entirely absent from the previous iteration, released nine long years ago in 2007. (The bank certainly can’t afford to wait that long before refreshing its coal power policy, which was ahead of the pack on its release in 2011 but is fast becoming a museum piece.) However it does appear, on paper at least, that the bank’s offer remains generously weighted towards its longstanding coal miner clients.

HSBC’s new rules on coal mining were published just as we were finalising our most recent assessment of top international banks’ coal finance restrictions in time for the COP22 meeting in Morocco. The new policy did a little to boost the bank’s lacklustre ratings – here’s how it now shapes up alongside its peers in the European banking sector.

Excerpt from table in "Still Coughing up for Coal" report.
Photo: BankTrack

Let’s take a closer look at what the new HSBC policy is offering on coal.

HSBC now joins the leading pack of banks which have excluded the financing of all new coal mine projects around the world, becoming the seventh big international bank to do so after Crédit Agricole, Natixis, Société Générale, BNP Paribas, ING and JPMorgan Chase. In concrete terms, this rules out the bank from direct involvement in major dodgy deals such as the Galilee basin coal mines in Australia. This is also an improvement on the early draft of the policy which was sent to NGOs for comment, which only ruled out new coal mines in developed countries.

A further positive sits right at the end of the new document, which declares somewhat minimalistically: “HSBC intends to publicly report portfolio-level details of its exposure to the coal mining sector.” This isn’t exactly the commitment to quickly reduce and end this coal mining exposure that we are looking for, but it’s a step in the right direction and we hope the data emerges soon.

There is also new language on human rights, with the bank restricting finance to customers causing or contributing to severe adverse impacts on human rights. However, earlier this year, when we challenged the bank on its finance for Drummond, a coal company alleged to be linked to paramilitary violence in Colombia, it was unable to account for how it had managed the situation. Without higher levels of transparency, it is almost impossible to verify whether HSBC is meeting this commitment.

And that is about it in terms of positives. The other potential good news, the new policy’s barring of finance for customers dependent on thermal coal mining, is seriously undercut by the fact that this only applies to new potential clients and not to existing clients.

This is a pretty big loophole, and is the reason HSBC receives a ‘fail’ for exclusion of coal mining companies in our table, while Crédit Agricole, Natixis and RBS merit ‘partially’ for stepping away from their existing pure play coal mining clients. And HSBC has plenty on its books, including Adaro, Eskom, Peabody and SUEK. The bank can’t finance any new coal mines developed by these companies directly, but has left itself some room to provide them with general purpose financing, which can help them indirectly.

A further disappointment comes with the new ‘approach’ to mountaintop removal (MTR) mining. Historically, HSBC has not been a big enabler of MTR mining, however the new criteria covering this barbaric mining technique is toothless. The bank says it won’t finance mines using MTR directly or provide general finance to customers ‘dependent’ on MTR in the Central Appalachian mountains of the US. However pretty much all MTR mining is carried out by mining companies which are not ‘dependent’ on MTR (i.e. it accounts for less than 50% of their turnover), and which are not reliant on project finance. So the bank’s policy excludes, concretely, nothing.

Finally, the bank also saw fit to drop some needless excuse-making for coal into its new policy. It states: “The transition to a low-carbon world must also be just and practicable. Stopping the use of all coal immediately would be damaging in other ways. Thermal coal generates 41% of the world’s electricity, so billions of people would have less or no electricity until alternatives are in place. New steel cannot be manufactured without metallurgical coal – for which there is no alternative. Workers and communities dependent on the coal industry will need support if job losses are widespread.”

While the latter point on the need for a just transition for coal workers and communities is well founded, the idea that anyone is calling for an immediate halt to all use of coal is nothing but a straw man. The bank is here draping itself in the dubious ‘coal for development’ mantra – a set of arguments being aggressively deployed by the coal industry to push back against the urgent climate change requirement to wind up coal development around the world as quickly as possible, as well as the existing coal infrastructure.

In comparison with its UK peers, this policy sees HSBC draw roughly level with RBS and Standard Chartered, which have adopted broadly similar policies: Standard Chartered has also adopted an exclusion on direct financing for new coal mines and new pure play coal mining clients, while RBS has not excluded direct financing for new coal mines but has excluded all undiversified thermal coal mining companies, not only new clients, and has a coal mining exposure ‘reduction commitment’.  Barclays, meanwhile, is nowhere, despite being one of the biggest coal financiers in the world.

Yet HSBC still has a long way to go to live up to its Paris Pledge for Action commitment to lend ‘its support to ensuring that the level of ambition set by the Paris agreement is met or exceeded’. To start with, a radical revamp of its 2011 policy on coal power is urgently needed. To not ‘fail’ again, HSBC must immediately stop financing new coal plants around the world, as Natixis, ING, Crédit Agricole and Société Générale have already done. The exact opposite of what it just did a few days ago by signing the financing agreement of the new KalSel coal plant in Indonesia.