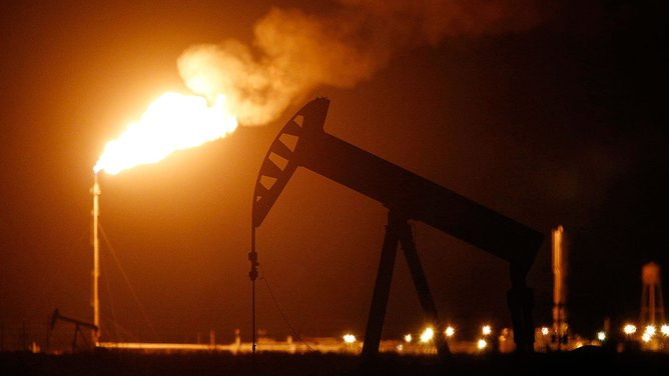 The news that major U.S. banks like JPMorgan Chase are preparing to ask regulators to allow them to take direct ownership of oil and gas companies should ring major alarm bells on Capitol Hill and across the nation, according to organizations with the Stop the Money Pipeline coalition.

On Thursday evening, Reuters reported that JPMorgan Chase & Co, Wells Fargo & Co, Bank of America Corp, and Citigroup Inc are each preparing to set up independent companies that could directly own oil and gas assets.

"So Chase and Wells Fargo want to cut out the middleman and go into the oil business, directly destroying the climate? Greed does weird things to your mind and your heart," said Bill McKibben, co-founder of 350.org.

These plans are in direct contradiction to the banks' stated goals of addressing the climate emergency. The only possible justification for taking an ownership stake in an oil and gas company would be to immediately begin winding down production and retiring existing assets, while taking care of workers by providing full benefits and pension guarantees. According to the Reuters reporting, however, banks seem to be planning to do just the opposite, attempting to move the companies back into profitability, likely by taking advantage of federal bailout money that should go to working families.

"This is like a bookie purchasing the track, only the track is a dying industry killing our chance at a future. Clearly these banks' climate commitments aren't worth the 'recycled' paper they were written on," said Tara Houska (Couchiching First Nation), founder of Giniw Collective. "It's our money in their vaults — hitting 'withdrawal' is long overdue."

There is little reason to believe that the four banks mentioned in the article have any intention of mitigating the climate impact of their actions. JPMorgan Chase, Wells Fargo, Citi, and Bank of America are, in that order, the four largest global bankers of fossil fuels, as detailed in the recently released "Banking on Climate Change: Fossil Fuel Finance Report 2020."

"JPMorgan Chase, Wells Fargo, Bank of America and Citi are the top four fracking banks in the world, and the top four fossil fuel banks in the world. This development exposes the central role of banks in fossil fuels and clearly illustrates the riskiness of fossil finance," said Jason Opeña Disterhoft, senior campaigner with Rainforest Action Network. "As the COVID recovery goes forward, a common-sense guardrail should be: banks can't take public money without committing to zero out their fossil financing. No bailout without fossil phaseout."

Along with the terrible climate and public health impacts of funding these oil and gas companies to continue to pollute, allowing financial institutions to directly own fossil fuel assets is an open invitation to corruption. In 2013, JPMorgan Chase paid a $410 million fine for manipulating electricity markets in the Midwest. The same year, Goldman Sachs was caught fixing aluminum prices by hoarding it in warehouses owned by the bank. Allowing banks to own companies in an industry already known for its corruption, disregard for public safety, and flagrant violation of environmental laws is a recipe for disaster.

"No way no how should regulators bail out climate-destroying banks like JPMorgan Chase from bankrupt investments by letting them become oil and gas holding corporations," said Pete Sikora, Climate Campaigns Director, New York Communities for Change. "The government should take over bankrupt oil and gas assets in order to rapidly retire them while protecting dependent workers and communities, not bank profits."

Elected officials and regulators have raised the alarm before about financial institutions taking direct ownership of fossil fuel companies. This session in Congress, Reps. Jesús "Chuy" García (IL-04) and Rashida Tlaib (MI-13) have introduced the Protecting Consumers Against Market Manipulation Act to set stronger limits separating banking and commerce, including by limiting banks' ownership of commodities. Sens. Elizabeth Warren (D-MA) and Sherrod Brown (D-OH) have also warned of the risks of bank ownership of physical commodities, including fossil fuel assets.

"Particularly at this moment, banks should be using their balance sheets to support small businesses and workers, not trying to spin a profit by propping up a dying industry that's the leading cause of climate change. If the banks are going to own oil and gas companies, the only acceptable outcome is to wind down the companies, retire their polluting assets, and take care of their workers," said Moira Birss, Climate and Finance Director at Amazon Watch.

The Stop the Money Pipeline coalition is calling on Congress and federal regulators to take immediate action to ensure the response to the coronavirus pandemic doesn't worsen the ongoing climate emergency. First, they must prevent all banks from taking ownership stakes in fossil fuel companies and assets. Second, they must ensure that no bailout money goes to banks, asset managers, or insurers unless these institutions commit to phasing out their support for fossil fuels and deforestation. Third, they must pass meaningful regulations that safeguard the financial system and the climate, including by limiting financial institutions' ability to finance fossil fuels and deforestation.

"The Fed should be intervening to make sure that fossil fuel companies are wound down and their workers and environmental obligations taken care of, not passing them off to banks who will look to spin a quick profit at the expense of both people and planet," said Alec Connon with the Stop the Money Pipeline coalition.

Stop the Money Pipeline will be engaging hundreds of thousands of Americans to send this message directly to Congress and Wall Street on April 23 as part of Earth Day Live, three days of online action around the 50th Anniversary of Earth Day.

"Over the last decade, US oil and gas producers have racked up more than $200 billion in corporate debt in a failed effort to make fracking profitable and keep expanding production while fossil fuel prices and prospects decline. With demand and revenue projections now collapsing at the precise moment when the bill is coming due, the banks that financed this massive and failed gamble are poised to seize assets to cover their losses. Not content to merely bankroll climate destruction and human rights abuses on a global scale, major banks are now moving to own the climate crisis outright. This is, to put it mildly, a very bad investment," said Carroll Muffett, President of the Center for International Environmental Law.

"At a moment when local people and communities need urgent government relief from the global pandemic it is downright criminal that Wall Street wants to buy out failing fossil fuel companies. There should be no bailout for polluters, from either Wall Street or Trump. We demand that government resources go directly to support communities directly." said Liz Butler, Vice President of Organizing and Strategic Alliances at Friends of the Earth

"This is the exact opposite of what the financial industry needs to be doing at this moment," said Caroline Henderson, Senior Climate Campaigner with Greenpeace USA. "In the midst of the COVID-19 pandemic, banks should be supporting small businesses and workers, as well as investing in climate resiliency — not becoming oil and gas corporations. We know we need to shift 90 percent of Wall Street's fossil fuel investments to low-carbon energy and renewables if we're going to keep the Earth's warming under 1.5 C. That means banks must stop financing destructive industries, and should certainly not be purchasing them in order to try and make them profitable again."

"Allowing private banks to start an unholy marriage with bankrupt fossil fuel companies would be a catastrophic mistake for communities and climate," said Collin Rees, Senior Campaigner at Oil Change International. "Any words JPMorgan Chase, Wells Fargo, Bank of America, and Citi have ever said about climate action would be instantly meaningless. The fossil fuel industry needs a just transition for workers and a swift phase-out of production, not to hand the keys to predatory financial institutions focused on profits for billionaires."

"After decades of financing climate destruction, JP Morgan Chase, Wells Fargo, Bank of America, and Citigroup got what they paid for: defaulting loans, declining assets, and a dangerously warming climate." said Tamara Toles O'Laughlin, 350.org's North America Director. "Now, in a desperate attempt to recoup what costs they can, these banks are taking ownership over oil and gas companies -- clarifying what many in the climate movement have known all along: our financial institutions are in bed with fossil fuels for short-term gains and long-term destruction. Sadly, it will be the workers, our communities, and those on the frontlines of dangerous fossil fuel projects who will bear the true cost of the damage."

"As Colorado's residents brace for the peak of coronavirus we are faced with increased vulnerability due to pollution from the massive amount of fracking and oil and gas operations such as frontline communities around the Suncor tar sands refinery and fracking operations in neighborhoods throughout the front range, bailing out these companies is a human rights violation of incredible proportions. We demand our government protect our most vulnerable and put a halt to these bail outs immediately," said Amy Gray Volunteer Coordinator, 350 Colorado.