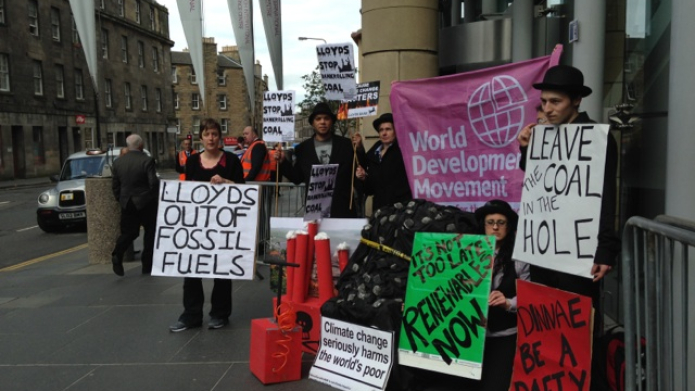 Protestors will target the Lloyds Bank AGM in Edinburgh on Thursday 15 May, accusing it of destroying people's lives and fuelling climate change by bankrolling the global coal industry. Protestors from the World Development Movement will hold placards reading ‘Lloyds: Stop Bankrolling Coal' and will play on Lloyds' marketing with a banner reading ‘Because Climate Change Matters'.

Lloyds has invested a total of £3.4 billion since 2009 in mining giants BHP Billiton, Anglo American and Glencore Xstrata, the companies behind the massive Cerrejón mine in Colombia. Cerrejón is the biggest coal mine in South America and is fiercely opposed by local people, including the indigenous Wayúu whose territory it has destroyed.

BHP Billiton, which alone has received £2.1 billion from Lloyds since 2009, plans to open coal mines across a vast area of the Indonesian rainforest.

World Development Movement climate and energy campaigner Alex Scrivener said today: "The coal industry is destroying lives and livelihoods on every continent with the help of Lloyds and the other coal-addicted big banks. For the sake of the people suffering from coal mining, and the sake of the global climate, Lloyds should pull out of coal."

Yasmin Romero Epiayu, a Wayúu woman from Colombia, said: "We need a global campaign against these banks. They're violating peoples' fundamental rights. It's not just Cerrejón. It's happening in Indonesia too. It's happening all over the world. They say they're investing in development. But their money is contaminated with blood."