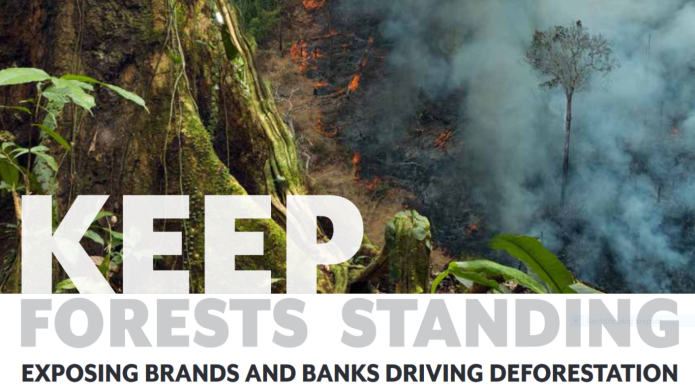 Marks the launch of a new campaign by Rainforest Action Network

A new report released today by Rainforest Action Network (RAN) calls out ten multinational brands and seven major banks that represent some of the most influential companies fueling the destruction of rainforests and the violation of human rights. The UN Intergovernmental Panel on Climate Change (IPCC) has said that reducing deforestation and the degradation of natural ecosystems is one of the most effective ways to mitigate climate change globally. Yet the report, titled Keep Forests Standing: Exposing Brands and Banks Driving Deforestation, outlines how the business practices of these brands and banks are continuing to drive the destruction of critical tropical rainforests, and in some cases, are failing to uphold their own commitments to end deforestation and respect Indigenous Peoples’ rights by 2020.

“We are living through unprecedented times in many ways. The ongoing crises of deforestation, biodiversity loss, and climate change continue unabated and they are aided, in large part, by these brands and banks,” said Robin Averbeck, Campaign Director for Rainforest Action Network (RAN). “Ten years ago, many of these companies made commitments to cut deforestation and the violation of Indigenous Peoples’ rights out of their business practices. All of them are failing to achieve this, regardless. It is well past time that these companies do better and we are here to hold them to account.”

The release of the report marks the launch of a new RAN campaign on 17 corporations –– influential companies deciding the fate of tropical rainforests in Indonesia, the Amazon, and the Congo Basin. RAN calls on these brands and banks to adopt and implement best practice ‘No Deforestation, No Peatland and No Exploitation’ (NDPE) policies across all “forest-risk” commodity supply chains, investments (including joint ventures), and for all financial services, at a corporate group level. RAN also demands the centering of Indigenous Peoples’ and local communities’ rights in any efforts to reform supply chains or protect and restore forests, noting that the expansion of industrial agriculture is not only one of the most significant drivers of deforestation, it is also significantly responsible for the violence that Indigenous Peoples face.

The report exposes, for the first time, how each of the brands and banks is connected both to each other and to the forestry and agribusiness corporations known to be actively causing or contributing to deforestation and human rights violations in their commodity production or processing operations in Indonesia.

Through their sourcing of forest-risk commodities –– including palm oil, pulp, and paper –– the brands profiled in the report have been complicit in the destruction of millions of hectares of tropical rainforests and peatlands in Indonesia through their sourcing from, or investments and business deals with, the forestry and agribusiness corporations.

Bank finance, which fuels both the supply and demand side of deforestation, is estimated to run into hundreds of billions of dollars per year. The bulk of the global financing for the forest-risk sector originates from banks headquartered in China, Indonesia, Japan, Malaysia, and Singapore, with banks in Europe and the United States also fueling the problem. The report highlights the role of seven influential banks –– one bank from each of these financial hubs. These seven banks, and the banking sector as a whole, are failing to acknowledge the enormous impacts of their financing practices on forests and rights. They are also failing to disclose the material risks of such lending to shareholders and financial regulators.

“Billions of dollars from banks are propping up the deforestation and biodiversity crisis, and this must stop. The banks profiled are some of the biggest banks in the world, and they routinely approve financing in violation of their own environmental and human rights commitments,” said Averbeck. “Money continues to flow even when clients are known to break local and national laws. The interconnected financial and business relationships between the most influential brands, banks, and forestry and agribusiness corporations mean that they are all culpable and reliant on each other’s role in this circle of destruction.”

***Rainforest Action Network wants to acknowledge the extraordinary circumstances of this moment, given the terrible impacts of COVID-19 on lives, health, and livelihoods for people around the world.   As we write, the urgent need to respond to the pandemic and resultant economic impact is rightly taking priority and may continue to do so for some time. However, deforestation, the attack on Indigenous Rights, and climate change remain existential threats. When we are able to refocus on the biodiversity and climate crises, we believe that the data and analysis in this report will prove useful in addressing those threats with the seriousness that they deserve.