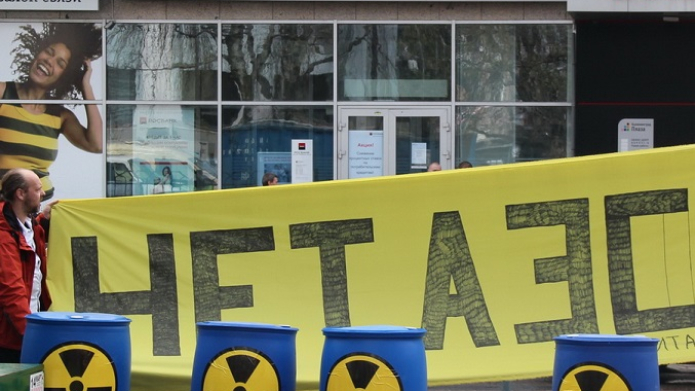 Following in the footsteps of BNP Paribas, the German HypoVereinsbank just announced that it will not finance the Kaliningrad nuclear power plant in Russia. Today, to mark the anniversary of the Chernobyl disaster, Friends of the Earth France launches the mobilization against this project in France with an online petition (1), supported by Greenpeace, the Nuclear Exit ("Sortir du nucléaire") network, ATTAC and BankTrack, demanding that Coface and Société Générale follow their example immediately. In addition, 94 organisations from 22 countries have signed an open letter (2) in support of this goal, while the Russian NGO Ecodefense, currently undergoing an inspection by the Russian authorities, demonstrates in front of the offices of Société Générale's subsidiary in Kaliningrad.

Following the announcement by BNP Paribas in December, the German bank HypoVereinsbank, a subsidiary of UniCredit, has now announced that it will not participate in the financing of a controversial new nuclear power plant in Kaliningrad. Located in the Russian enclave between Poland and Lithuania, the project aims to enter the European energy market by selling electricity to these neighbouring countries, although they have already stated their opposition to the project. Rosatom, the Russian company leading the project, is looking for an investor to take on 49% of the project, so far without success. In this context, Coface and Société Générale have been solicited for an export credit facility to fund Alstom turbines for this project.

It is not only the neighbouring countries, but also the local population that has been also opposed to the project since its inception. Vladimir Slivyak, from the Russian NGO Ecodefense, explains: "On this Chernobyl Day, we call directly on Coface and Société Générale, by sending them an open letter signed by 94 organisations from 22 countries around the world, to ask them to abandon this project. This letter highlights the futility of the project, which does not meet local needs, and the fact that many inhabitants have been stopped by Rosatom and the Russian authorities from participating in public hearings, which is unacceptable. The project's Environmental Impact Assessment does not comply with Russian legal norms, and remains unsatisfactory on many issues including waste management, reactor decommissioning and impacts of a major nuclear accident. We will demonstrate today in front of the Société Générale subsidiary here in Kaliningrad. (3)"

Russia is well-known for its lack of nuclear safety. On this sad anniversary of the Chernobyl disaster, the consequences of this nuclear catastrophe are still tragically felt on the European continent. Many corruption scandals have also hit the Russian nuclear industry in the past few years. Russia also exerts more and more pressure on NGOs like Ecodefense, currently being inspected by the Russian authorities.

After a first meeting with Coface and Société Générale in March with Vladimir Slivyak's participation, Friends of the Earth France now launches the mobilization against this project. Yann Louvel, Climate and Energy Campaign Coordinator for the BankTrack network, concludes: "We start today with the launch of a cyberaction (1), in collaboration with Cyberacteurs website, also supported by Greenpeace, the network "Sortir du nucléaire", ATTAC and BankTrack, to ask Coface and Société Générale to abandon this project. We invite all French citizens to take part in this cyberaction, to demand that these two financial institutions follow BNP Paribas and HypoVereinsbank and immediately abandon this project."