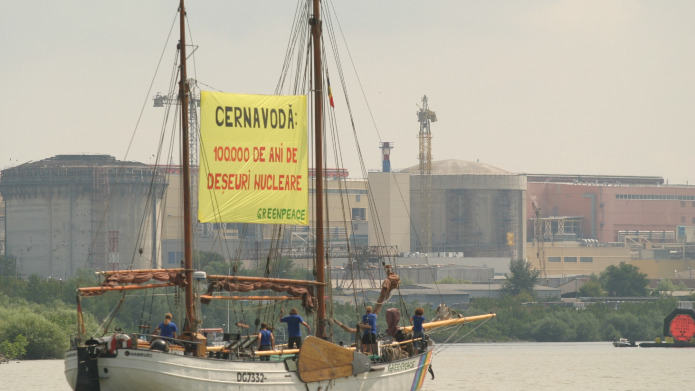 Greenpeace has filed complaints to the European Commission over alleged illegal state aid for the construction of two nuclear reactors in Romania and two in Bulgaria. The environmental organisation argues that both countries violate EU competition rules.

Jan Haverkamp, EU energy campaigner for Greenpeace, said: "We have been investigating for many months the unfair competition conditions that have been granted to the nuclear sector in Romania and Bulgaria. We have now submitted the evidence we have collected to the European Commission, and are calling for urgent
action to correct these flagrant market distortions."

The Romanian government earmarked €220 million for the Cernavoda 3 and 4 nuclear power plant. On top of this, the state spent €350 million in taxpayers’ money for the purchase of heavy water for the new power station, as well as €800 million to
increase the capital of state utility S.N. Nuclearelectrica – S.A., with the purpose of supporting its financial contributions to the project. (1)

The Bulgarian government has invested 300 million Bulgarian Leva (€154 million) in state utility NEK for the construction of the Belene nuclear power station, as well as another 400 million Leva (€205 million) in NEK's parent holding BEH, partly also meant for Belene. (2)

According to Greenpeace, all of these investments are in violation of EU competition law.

Crisanta Lungu, Greenpeace energy campaigner in Romania, said: "It is particularly important that taxpayers’ money is spent wisely in economically difficult times. Investments in energy efficiency and renewables would bring more jobs and more energy security. Instead, Romania’s nuclear industry is swallowing investments up
like a black hole."

Denitza Petrova, from the Green Policy Institute in Sofia, Bulgaria, said: "There is still very little support from the government for energy efficiency and renewables, even though Bulgaria uses up to four times as much energy per GDP as the EU average.
Nuclear subsidies harm the healthy development of our energy sector."

Belene’s new VVER 1000/466B reactors are due to be built by Bulgarian state utility NEK (51%) and German utility RWE (49%). Construction is expected to start later this year.