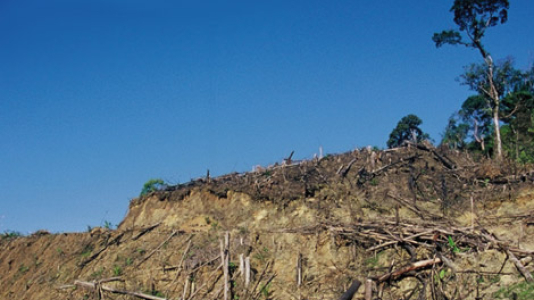 Credit Suisse of Switzerland, British HSBC and the Australian Macquarie Bank are taking steps to list Samling Global Ltd, a Malaysian logging company, on the Hong Kong stock exchange. The sale of shares will start on 23 February, with official trading set for 7 March. Samling expects to raise 280 million US Dollars from the listing and intends to use the money for expansion and to repay debts.

The Malaysian Samling group, which is based in the Malaysian state of Sarawak on Borneo, is one of Malaysia`s biggest logging companies and responsible for the ongoing destruction of large areas of tropical rainforest. Samling oversees about 4 million hectares of forest concessions in Malaysia, Guyana, China and New Zealand. In the past, the company was also active in Cambodia and Papua New Guinea, where it was involved in illegal logging activities.

Samling has been particularly criticized for the systematic destruction of tropical rainforests in the Malaysian state of Sarawak on the island of Borneo, one of the world`s centers of biological diversity and home to the Penan people who live in the rainforest.

On 7 February 2007, the Malaysian police cleared a logging road blockade that a group of Penan had set up to protect one of Sarawak’s last remaining areas of tropical rainforest from logging by the Samling corporation. Many Penan communities, such as the nomadic Penan group under chieftain Along Sega, are permanently being threatened by bulldozers of the Samling corporation. Together with other companies, it has already destroyed large parts of the rainforests on the Penan`s native lands.

Samling fails to meet basic ecological and social standards in other countries too. In January 2007, the Forest Stewardship Council (FSC) suspended the certification of a Samling forest concession comprising 570,000 hectares in the South American state of Guyana because the company did not comply with the certification standards.

By cooperating with Samling on the occasion of its listing on the Hong Kong stock exchange, Credit Suisse, HSBC and Macquarie are making themselves part of the irresponsible and destructive logging practices and human rights violations of the Samling group. The Bruno Manser Fonds and the Berne Declaration ask the involved banks to cease their involvement with Samling’s listing immediately and to stop their business relationship with the Malaysian logging group.