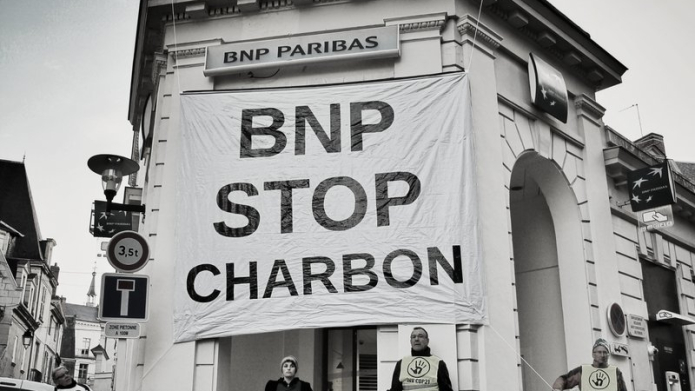 On the eve of Climate Finance Day, taking place tomorrow in Casablanca ahead of next week’s UN climate summit in Marrakech, a new NGO briefing has uncovered how French bank BNP Paribas has still not blacklisted Poland’s biggest power producer PGE from financial support. BNP Paribas pledged a year ago to stop funding coal mining and power companies which are not diversifying away from coal, yet PGE has plans to expand the Polish coal industry.

The briefing, published jointly by Friends of the Earth France, Fair Finance France, BankTrack and the Polish ‘Foundation Development YES Open-Pit Mines NO’, analyses the measures adopted by French banks since last year to reduce their support for the coal industry. It finds that, in spite of some progress since bringing in new coal restrictions around last year’s Paris Climate Summit, French banks continue to be involved in coal financing, and calls on the banks to now rapidly increase their climate ambitions via strong financing policies which they should enact in full.

"BNP Paribas is really dragging its heels when it comes to ending finance for companies developing new coal projects. The bank is supposed to have committed not to support companies which fail to diversify and reduce their activities in the coal sector.

“Yet, in Poland, BNP Paribas has still not ruled out support to PGE, while the company is producing 85% of its electricity from coal and is pumping over 83% of its investment budget into coal. BNP Paribas also undertook last year to no longer directly fund new coal power and mining projects in high income countries such as Poland, yet continuing to do so via indirect support such as corporate loans or the issuance of new bonds is completely hypocritical."

"By supporting PGE as it is building coal plants, planning huge new open-pit lignite mines and helping to keep afloat the country’s collapsing mining sector  BNP Paribas is providing a shot in the arm for an industry stuck in the past and is helping to condemn Polish communities who aspire to a healthier and cleaner future. BNP Paribas has to start listening to the majority of the Polish population who want new investments to deliver a new economy, one based on energy efficiency and renewable energy. It should now exclude PGE from future financial support."

Other than BNP Paribas’ activities in Poland, the new briefing also evaluates and compares all the measures adopted by France’s top banks over the last 12 months aimed at reducing their support to coal. It concludes that BNP Paribas, Crédit Agricole, Natixis and Société Générale can contribute to the achievement of the 1.5°C climate change target but only if they stop supporting coal quickly and entirely.

"Respecting the goals of the Paris Agreement certainly requires banks to adopt policies which exclude funding for the coal industry, but these policies also have to be implemented. As the Paris Agreement comes into force, for France’s top banks it’s highly regrettable that not only do the policy improvements made not go far enough to respond to the climate emergency, but by and large they are still being implemented slowly and very inconsistently."

2. Far from seeking to diversify, on 31 December 2015 the Polish power giant PGE stated its intention to spend 83.5% of its investment budget in new coal plants and the modernisation of existing coal plants, compared with less than 1% for renewable energy. See page 90 of the company’s Financial Statement for 2015.