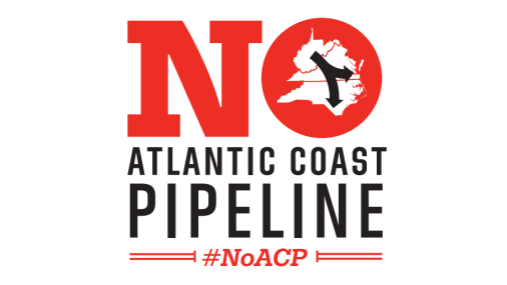 As the sound of chainsaws shatters the peace along much of the 600-mile route of the Atlantic Coast Pipeline (ACP) in West Virginia, Virginia and North Carolina, Bank of America’s (BOA) shareholders and executives will meet in Charlotte, NC next week for the company’s annual general meeting (AGM).

Among the shareholders, few may be aware of the bank’s leading role in financing the disaster that is ACP. But impacted landowners and Indigenous community leaders from North Carolina will be there to set them straight, and expose the key role Bank of America is playing to ram the unwanted and unnecessary fracked gas pipeline through their communities.

The Atlantic Coast Pipeline is being constructed by Dominion Energy, Duke Energy and Southern Company, which have together formed a private company, Atlantic Coast Pipeline LLC, specifically to build and operate the pipeline. The pipeline will have a capacity of 1.5 billion cubic feet per day, enough fossil gas to generate over 67 million metric tons of climate pollution per year. Emissions equivalent to 20 average US coal plants. It will cut a swathe through the Allegheny mountains in West Virginia and Virginia and run along the length of the western edge of North Carolina’s coastal plain.

The pipeline’s route burdens some of North Carolina’s poorest communities including the native Lumbee population. In Virginia, one of the project’s massive compressor stations, an industrial complex generating noise, pollution and safety hazards 24/7, is proposed in the heart of a historic, rural African-American community. The litany of this project’s abuses and dangers is long. And those abuses and dangers now have a clear set of financiers, led by the nation’s largest commercial bank, Bank of America.

A credit agreement was signed in October, 2017 between Atlantic Coast Pipeline LLC and a consortium of banks to finance approximately 50 percent of the $6 billion+ construction costs. Duke Energy’s CEO discussed the loan with investors during an earnings call in November. But the details of the banks involved in the loan were only recently made available to us.

Bank of America, together with JPMorgan Chase, was a “Lead Arranger and Bookrunner” for the loan. This means BOA was key to the process of negotiating terms, assessing risk and arranging the participation of all the banks forming the syndicate for the loan. It also means that BOA is online for tens if not hundreds of millions of dollars in commitment to the loan. We do not know the precise figure, as few details of the loan have been disclosed.

Bank of America’s leading role in this loan adds to the Bank’s poor performance in screening out financial support for companies engaging in the production of so called ‘extreme’ fossil fuels, including coal, tar sands, and oil and gas produced in ultra-deepwater and Arctic environments. Rainforest Action Network recently published its annual Fossil Fuel Finance Report Card, which examines bank policies and financing for the worst fossil fuels driving the climate crisis. Bank of America received an average D Grade for its policies on the fossil fuel projects discussed in the report, and was estimated to have financed over $13.6 billion to these projects from 2015 through 2017. This financing did not include the loan to ACP LLC.

Bank of America has some positive climate goals, primarily a goal to finance $125 billion in loans for “low-carbon and sustainable business by 2025 to address climate change and other demands on natural resources”. But by only focusing on financing clean energy, BOA is neglecting a key piece of the climate change puzzle. It lacks coherent policies to restrict financing for the causes of climate change, fossil fuels including coal, oil and gas, and the infrastructure that facilitates the expansion of those fuels. The Atlantic Coast Pipeline will enable growth in Appalachian fracked gas and is associated with human rights abuses and environmental destruction.

The World Bank Group recently announced an end to upstream oil and gas financing by 2019. Other banks including ING and BNP Paribas are restricting financing for some of the worst fossil fuel projects. There is so much more the finance sector should be doing, and Bank of America is lagging behind some of its peers on this crucial sustainability issue that weighs so heavily on our planet’s future.

Bank of America needs to get out of the ACP loan and implement policies to restrict financing for oil and gas pipelines and fossil fuel production. Only then will it be a leader in addressing climate change.

The full list of banks participating in the loan to ACP LLC is in the table below. They include commercial banks that are the target of ongoing campaigns against pipeline finance, including Wells Fargo and JPMorgan Chase. Also of note is the participation of BB&T, another North Carolina-based bank. CoBank is a Colorado-based credit union focused on rural development, which is ironic given the burden rural communities and farmers face along the route of the Atlantic Coast Pipeline.