Home › News
Are banks partly responsible for child labour and deforestation in chocolate production?
The role of Belgian banks in the cocoa sector
By: FairFin
2021-04-03 Contact: 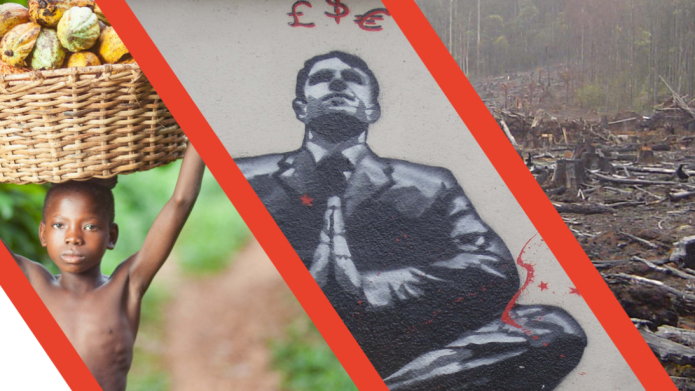 FairFin reports on the questionnable involvement of Belgian banks in the cocoa sector. Photo: FairFin Belgium

Banks in Belgium do too little to combat child labour and deforestation in the production of cocoa and chocolate. Yet they have the necessary means to do so. Between 2016 and 2020, banks active in Belgium invested more than EUR 26.5 billion in multinationals that dominate the cocoa and chocolate sector. According to FairFin, an organisation that argues for more ethical and ecological sustainability in the fnancial sector, these investments were barely subjected to any social and ecological requirements.

When it comes to chocolate, Belgium is an undisputed giant on the world stage: Belgians are not only big chocolate consumers, the country is also the second largest exporter of chocolate in the world and one of the largest importers of cocoa beans. And during this Easter period, 10% of the annual chocolate revenue is collected.

New fnancial research by FairFin shows that between 2016 and 2020, banks operating in Belgium invested more than EUR 26.5 billion in multinationals dominating the chocolate trade. The banks thus bear a heavy responsibility, because poverty, child labour and deforestation are known problems in the sector that have persisted for decades. The big players in the cocoa sector have been acknowledging these problems for twenty years. Yet they have not made any progress in removing them from their supply chains.

Jozef Vandermeulen, researcher at FairFin: "Companies in the cocoa sector depend on these loans, bonds, and shares for their functioning. Banks are therefore perfectly placed to set requirements so that they do not fnance harmful practices. But the conditions that banks currently use to control their investments in cocoa are too non-committal, too vague and not strict enough. We call on banks to clearly define their objectives on deforestation, child labour and poverty alleviation and to exert pressure by attaching strict conditions on the price and origin of cocoa to their investments. The whole production chain has to be taken into account."

NGOs have been pushing for a higher price on cocoa for years to ensure a higher income for farmers. This would remove the breeding ground for harmful practices and is the frst and most important step towards a more socially and environmentally sustainable sector. However, the multinationals refuse to do this because it gnaws away at their profts.

"Our government, too, allows too much to happen," says Jozef Vandermeulen. "Belgium is a giant in the cocoa sector. That gives actors in our country great responsibility but our government is not using that position to improve the situation. There is a need for stricter legislation that obliges companies and banks to trace and tackle harmful practices in their supply chain, with real penalties if they fail to do so. Furthermore, our government is the main shareholder of BNP Paribas and the only shareholder of Belfius. It can therefore give these banks even more leverage to ensure that child labour is explicitly excluded throughout the production chain, including suppliers. Any company that does not comply with this should not receive any financing. The Belgian government should also advocate ensuring that cocoa suppliers receive a living income."

To put extra pressure on the banks and make them aware of their responsibility, FairFin is launching an online complaint letter that people can send to their bank.