This profile is no longer actively maintained, with the information now possibly out of date
Send feedback on this profile
Download as PDF By: BankTrack
Created before Nov 2016
Last update: 2016-10-18 16:41:20 Contact: 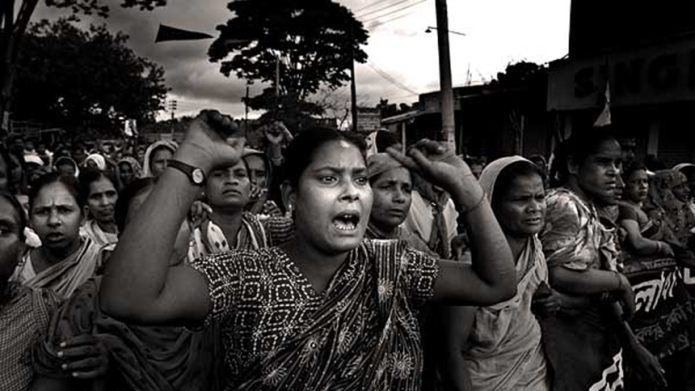 About Phulbari coal mine

The Phulbari coal project is a proposed open pit coal mine in northwest Bangladesh and includes the construction of at least one 500-MW power plant. At full production about eight million tons of coal will be transported by rail and barges to an offshore reloading facility located in Akram Point. An additional four million tons will be exported to India via railway, and the remaining three million tons will be used for domestic energy consumption.

The Phulbari Coal Mine is a fundamentally flawed project that risks the impoverishment of hundreds of thousands of people in Bangladesh and will lead to more conflict in the area.

Protest at annual SH-meeting of GCM Resources by climate activists

It is strongly recommended that project financiers, including public development banks and private financial institutions investing in GCM Resources immediately withdraw their support for GCM and this project.

The project will acquire almost 6,000 hectares of land (60 sq km) and, according to project documents and independent reports, will physically and economically displace between 50,000-220,000 people. This displacement will take place in one of the most densely populated countries in the world and will destroy a critical agricultural region in the country, threatening Bangladesh’s food supply.  Over 80 percent of the land taken for this project will be fertile, agricultural land which will not be replaced, leaving farmers and families dependent on the land for their livelihoods with few options for employment. In short, the project would turn hundreds of thousands of farmers into land-less wage earners, competing for jobs in entirely different sectors.

In addition, if the project is implemented, the open-pit mine will destroy or displace: 1,577 ponds (used to earn income through sale of fish); 80,000 fruit and timber trees (plus many thousands of bamboo sticks); 928 businesses; 36,052 homes, barns, boundary walls and toilets; 106 schools; 48 health facilities; 138 mosques, temples and churches; 692 graveyards; and 2 ancient archaeological sites.

The grassroots resistance that has formed around the project has been met with egregious violations to human rights. In August 2006, the Bangladesh Rifles, a paramilitary force, opened fire on the 50,000 local people who were conducting a peaceful protest around the Phulbari project area. At least three people were killed, including a 14-year old boy, and over 100 people were wounded.

Following these protests, in January 2007, Bangladesh was put under emergency rule and a military-backed interim government took over in the country. In many ways, rule of law has been suspended in the country. Over the past 18 months, community leaders, individuals from non-governmental organizations, human rights defenders and others have been intimidated, threatened, arrested and tortured. As one example, in February 2007, Mr. S.M. Nuruzzaman, one of the leaders of the social movement in opposition to the project, was falsely arrested and subsequently tortured. The Bangladeshi ‘joint forces’ were reportedly directed by officials of Asia Energy, a wholly-owned subsidiary of Global Coal Management, to arrest Mr. Nuruzzaman.

In Bangladesh, fewer women than men work in formal paid employment (57.2% vs. 89.8%), more women than men work in the informal agricultural sector (67.8% vs. 59.4%), more women than men are illiterate (67% vs. 48%), women generally lack property rights due to patrilineal inheritance laws, and they perform the majority of domestic care work.
Thus, the Phulbari Coal Project’s potential displacement of over 100,000 people from prime agrarian land, plus its plan to de-water the mine area (appx. 314 sq km.), would produce the following effects:

In order to keep the open-pit mine from flooding, the company will need to deplete the water table leading to water scarcity for communities around the mine area.

In addition to the impacts the project will have on water availability, it is likely that there will be significant contamination of land and rivers much beyond the mine area due to acid mine drainage. Hundreds of small rivers in the area are linked like a huge net, allowing polluted water to travel long beyond the mining footprint.

Another important environmental concern is that the project may lead to the degradation of the Sundarbans, a UNESCO protected mangrove forest because the coal will be transported through this area in barges. This forest is a habitat for the Bengal Tiger and many endangered species and also serves as a source of livelihood for fisherfolk and other communities dependent on the wetlands for sustenance. The Sundarbans also act as a natural barrier protecting the Bangladeshi people from the impacts of typhoons, floods and other natural disasters.

Energy and mining firm GCM Resources said that it has signed a memorandum of understanding with Foreign Engineering & Construction Co and Power Construction Corp of China. The memorandum forms the basis for a strategic partnership between the three companies to develop GCM's coal resource of 572 million tonnes at the Phulbari coal and power project in Bangladesh (Morningstar).

Protest at annual SH-meeting of GCM Resources by climate activists

On Thursday, December 15, 2016, Bangladeshi protesters from the Phulbari region were joined by climate activists in London outside of the annual general shareholders meeting of Global Coal Management (GCM) Resources Plc, a British mining company who wants to build a massive open cast coal mine by forcibly displacing 130,000 people in Phulbari, Bangladesh (source Cultural Survival).

Outcomes of the OECD complaint

The UK National Contact Point (NCP) for the OECD Multinational Guidelines reported in on the Phulbari complaint in November 2014. The NCP's conclusion was that GCM had not breached its obligations to respect the human rights of those affected by their activities, nor its obligations to carry out appropriate human rights due diligence. It was, however, advised that GCM did breach its obligations to "develop self-regulatory practices and management systems that foster confidence and trust in the societies they operate in", with the recommendations that GCM should undertake a human rights impact assessment, engage with affected communities and develop its communications plans. The statement also said that the NCP would investigate whether GCM have fulfilled these recommendations in May 2015. This was a very disappointing outcome. The NCP refused to consider the inevitable impacts of the project on human rights should it go ahead, which is inconsistent with the OECD guidelines. There were also concerns about the NCP's failure to engage with expert opinions or consider the situation on the ground in Bangladesh. More details about the OECD Complaint can be found on the OECD Watch website.

Protests marked 2013. An official complaint to the Organisation for Economic Co-operation and Development has been made by the World Development Movement and the International Accountability Project, saying the company would forcibly evict up to 130,000 people if the project went ahead. The complaint mentions a UN report from earlier this year warning that "access to safe drinking water for some 220,000 people is at stake". As part of a new strategy, GCM substituted some British members of the board of directors for Malaysians.

The situation in Phulbari has been tense since Oct 14th, when the Ministry of Home Affairs issued a circular instructing local police and administrators to cooperate with new surveys to be carried out by Global Coal Management (GCM), the UK-based company pushing the project.

Protests ensued and the Goverment of Bangladesh (GoB) slapped a ban in place prohibiting gatherings of more than 4 people.  In response, local protesters defied the ban and organized a two-day general strike and demonstration that shut down highways, shops, etc. throughout Phulbari.

GoB deployed some 500 armed forces to Phulbari, including the notorious Rapid Action Battalion, denounced as "a death squad" by Human Rights Watch. Local protesters have now set a deadline of 31 December for GoB to meet their demands to permanently expel GCM from Bangladesh and implement a ban on open pit mining.

As of 31 December 2010, GCM continues to state that  they will move forward with the Phublari project when the government finally approves the Scheme of Development. Currently discussions continue with the government. However, the Bangladesh parliamentary Standing Committee on Power, Energy and mineral resources are recommending that the country moves towards open cut mining methods of extraction.

Recently, there was a Wikileaks release stating that US diplomats are, and have been, pressuring the Bangladesh government to reopen Phulbari coal mine negotiations, which was closed due to protest.

This project has been on hold, in the planning phase, since Bangladesh entered emergency rule in January 2007. However, following the national elections in December 2008, a new government has taken over and is reconsidering whether or how to move forward with the project.

As of July 2011, more than half (53.9%) of GCM equity is held by US hedge funds including Luxor Capital Group LLC, LCG Holdings LLC, and Christian Leone.

Asian Development Bank was preparing project and is not currently involved but, the project may enter the Bank’s pipeline again in the future.

Barclays and RBS withdrew from the project in 2008 by selling their shares in GCM subsequent to pressure through protests at their AGMs.

Protest in London against Phulbari coal mine

When will GCM Resources be put out of its misery?

Govt says "no" to open-pit mine

Bangladesh mine activists dump coal outside GCM meeting in London

Protests at GCM Resources AGM over Bangladesh coal mine

Complaint filed against British coal miner GCM over Bangladesh mine

Demo over Bangladeshi Brit-backed mine

Bangladeshi activists in London unite in protest outside GCM's AGM

Over 150 detained during hartal

The struggle against India's coal rush

Down with coal! The grassroots anti-coal movement goes global

Energy at what cost? Protests against forced eviction from US-backed coal mine continue in Bangladesh

WikiLeaks cables: US pushed for reopening of Bangladesh coal mine

Initial Assessment By The UK National Contact Point For The OECD Guidelines For Multinational Enterprises
2013-06-17 00:00:00 | OECD
other documents

A Threat To People, Land, And Human Rights In Bangladesh
2011-12-31 00:00:00 | International Accounatbility Project
other documents

Letter of urgent concern to GCM

To the Office of the UN Independent Expert on the Right to Water and Sanitation:

Model letter to government of the People’s Republic of Bangladesh

Cultural Survival Launches Campaign to Halt Coal Mine in Bangladesh

A letter to the New York Times on Phulbari

CSO letter to GCM Resources concerning the Phulbari coal mine

OMCT acts to prevent further violence in connection with a large scale open-pit coal mine in Phulbari, Bangladesh and welcomes the Asian Development Bank’s suspension of support for this project

Bangladesh: Risk of violent suppression of public opposition to Phulbari coal mine project

Another Time: Coming up Another Occasion to Displace People

A blog on the displacement of people due to the project
http://refugeewatchonline.blogspot.com/2011/04/another-time-coming-up-another-occasion.html

This project is dedicated to reversing the degradation and loss of mangrove forest ecosystems worldwide. Its main goal is to promote the rights of traditional and indigenous coastal peoples, including fishers and farmers, to sustainably manage their coastal environs.
http://mangroveactionproject.org/

Bob Kincaid, of Head-On radio, invites Cultural Survival's Paula Palmer to speak about a campaign to prevent a coal mine from displacing thousands of Indigenous farmers in Bangaldesh's northwest town of Phulbari.
http://soundcloud.com/culturalsurvival/paula-palmer-talks-with-bob

Link to a news article outlining the disadvantages of the Phulbari coal project.
http://www.un.org/apps/news/story.asp?NewsID=41398&Cr=bangladesh&Cr1=