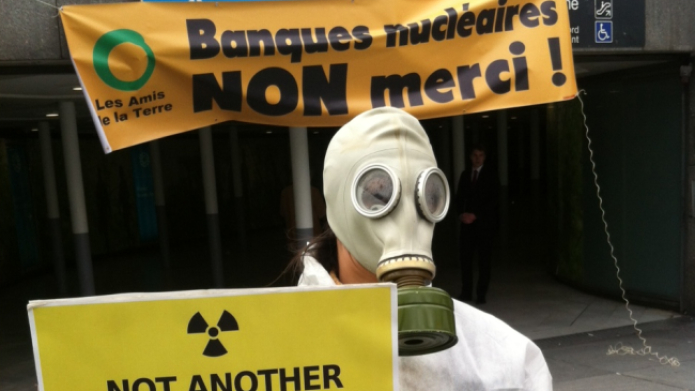 Société Générale is holding its AGM this afternoon. Les Amis de la Terre (Friends of the Earth France), along with Vladimir Slivyak, from the russian NGO Ecodefense, are challenging Frédéric Oudéa, Société Générale CEO, on his participation to the Kaliningrad nuclear project. Despite the announcements by BNP Paribas and german bank HypoVereinsbank to refuse to finance this project, neither Société Générale nor Coface have renounced to it until now. Les Amis de la Terre relay today more than 4 000 French cyberactivists (1) and 94 organisations from 22 countries (2) asking them to withdraw from this project immediately.

During his intervention, Vladimir Slivyak will remind what is at stake for this new nuclear power plant: "Local people oppose this nuclear project, its electricity is not needed in the region, it's questionable on economic ground, and doesn't comply with SocGen nuclear policy. Moreover, there is a threat of repression against activists protesting Baltic nuclear plant. This project is totally useless since it is only aimed to get access to the European market by selling the electricity to neighboring countries which don't want it. The Environmental Impact Assessment is finally not legal because it raises many issues including waste management, dismantling and the impacts of a major nuclear accident".

It must be mentioned that Ecodefense in Kaliningrad already experience pressure from authorities. On April 26, Ecodefense staged protest near the office of Rosbank, Russian branch of Societe Generale. One day earlier, Russian authorities unexpectedly started the inspection of Ecodefense which resulted in official warning issued by local prosecutor over activities of organization. Although next official warning may result in the closure of Ecodefense,  Russian activists intend to continue campaign against Baltic NPP.

Other banks have already announced that they will not finance this project. It is the case of BNP Paribas, since December, and the german bank HypoVereinsbank, subsidiary of Italian group UniCredit, since last month. Yann Louvel, climate and energy campaign coordinator of the BankTrack network, continues: "The Kaliningrad nuclear project doesn't respect BNP Paribas sector policy on nuclear, and the bank logically refused to finance it. But this is also the case with Société Générale sector policy on nuclear, but it doesn't draw from it the same conclusion! Waste management, dismantling and reaction programs to situations of urgency are totally unsatisfactory. Without even mentioning corruption and human rights violations, frequent in Russia. Société Générale must face these facts and draw the good conclusion from this analysis."

Mobilisation against this project in France started last month on Chernobyl Day, with a cyberaction supported by Greenpeace, the ‘'Nuclear Exit" network, ATTAC and the international BankTrack network. Yann Louvel concludes: "On top of local population and neighboring countries, who do not want this project, there are now more than 4 000 French citizens and 94 organisations from 22 countries asking Société Générale to renounce immediately. Société Générale has to announce its withdrawal today if it doesn't want to see this mobilization growing in the coming weeks."

(1)The cyberaction is available online on this page (in French) : http://www.cyberacteurs.org/cyberactions/societe-generale-coface-ne-doivent-pas-financer-projet-nucleaire-russe-kaliningrad-600.html

(2)The open letter signed by these organisations is available on this page : http://www.amisdelaterre.org/IMG/pdf/letter_to_socie_te_ge_ne_rale_on_baltic_npp.pdf