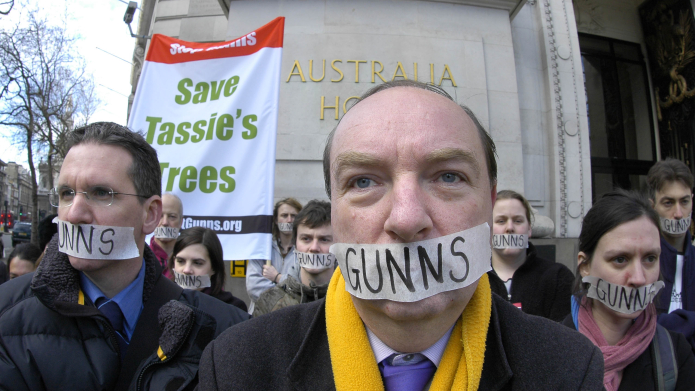 Mr Smith is a man with an extraordinary task. He will assume the role of ANZ’s Chief Executive Officer from October 1st and will take responsibility for ANZ’s environmental and social impacts. Mr Smith arrives at a time when ANZ is heavily involved with Gunns Ltd and their controversial pulp mill. If the mill were to proceed, it would spell disaster for the one of the world's remaining great natural areas, dramatically increasing logging and burning of native forest, and spilling deadly chemicals from the mills' chlorine based bleaching process into Tasmania's waters.

Since 1995 ANZ has provided crucial financial services to Gunns. Today ANZ provides the company with secured bank loans with a current debt thought to be more than AU$300 million (US$250 million). Relative to the pulp mill ANZ is understood to have advised on the project and is also the lead arranger. Further, Gunns management states that ANZ is certain to provide project finance, underwrite the mill, and that the bank has already arranged export credit deals from Europe.

Mr Smith can put a halt to the project and prevent widespread impacts by ending support for the destruction of Tasmania’s native forests and Gunns’ proposed pulp mill.

Mr Smith arrives at ANZ from his previous position at HSBC, one of four international banks which founded the Equator Principles (EPs) in 2004. EPs are environmental and social principles that ANZ promises to apply to Gunns' new project. Concerns regarding the environmental, health and economic impacts of the proposed mill worry local residents, whilst procedural irregularities and major gaps in the environmental assessment documentation create an enormous risk that the ANZ will fail to live up to its environmental commitments, including the Equator Principles. Mr Smith is now being asked to bring ANZ in line with their environmental and social commitments and prevent further damage by Gunns.

ANZ so far has managed to kept out of the spotlight regarding Gunns, however a new chapter in the bank's drive for sustainability opens as Mr Smith assumes his executive  responsibilities. David Barnden from BankTrack comments “Mr Smith has a wonderful opportunity to show ANZ’s customers, the Australian public, and the world true leadership and commitment to uphold banking industry standards.”

Whilst Mr Smith receives petitions from across the globe, the mega-pulp mill awaits final assessment by Australia’s environment minister, Mr Turnbull. In Australia the project enjoys widespread opposition and critical media coverage, and is becoming one of the key political issues as federal elections fast approach. In Mr Turnbull’s Wentworth electorate, constituents overwhelmingly opposes the mill's approval which, along with the Chief Scientists' upcoming report, will weigh in heavily on his decision. Uncertainty over the mill increases as Mr Turnbull distances himself from the controversial actions of Tasmanian Liberal leader Mr Lennon who ushered fast-track legislation through Tasmanian parliament after Gunns repeatedly failed to meet the state’s established environmental standards.

Gunns Ltd has a market capitalisation well under the AU$2 billion (U$S 1.6 billion) cost for the pulp mill and relies heavily on ANZ to finance the project. Without ANZ's help, Gunns' pulp mill project will likely fail.