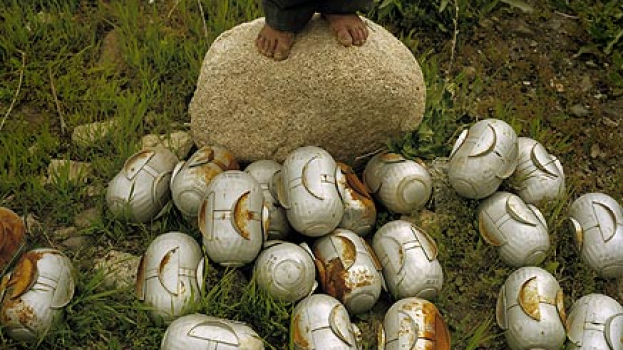 Last week KBC bank revealed that eleven more weapon producers have been added to their “black-list” of companies. KBC has stated that it will no longer invest in these eleven companies, who are all involved in the production of cluster munitions. This decision has been taken in the context of a stricter policy of the bank group in relation to the arms trade. Netwerk Vlaanderen, Vrede, Forum voor Vredesactie and For Mother Earth warmly welcome this decision. KBC has shown that it is taking the implementation of its weapon policy seriously.

The British company BAE Systems, US Northrop Grumman, German Rheinmetall and Korean Poongsan are examples of companies that have been placed on the black-list of KBC. These companies are all involved in the production of cluster munitions. Textron, Lockheed Martin and EADS are amongst the arms companies that have already been placed on the list, which now contains 19 companies. KBC will not invest in, or finance, companies on the black-list. KBC investors will no longer find these companies in their portfolios.

This new decision takes place in the context of a stricter KBC policy in relation to weapon producers that was introduced in 2004. The policy was prompted by the campaign of Netwerk Vlaanderen and a number of peace organisations, “My Money. Clear Conscience?”, that opposed investments in the arms trade. KBC first decided to ban companies which were involved in the production of internationally prohibited weapon systems. This was followed by producers of cluster munitions and depleted uranium weapons. Although there is no international treaty outlawing these weapons, they are both highly controversial.

KBC one step ahead of the pack

Other banks including Dexia, Fortis and ING have adopted stricter investment policies. KBC is, however, the first conventional bank group which applies this policy across all of its products. KBC therefore also excludes these weapon producers from its investment funds. The exclusion of eleven further producers of cluster munitions shows that KBC is taking implementation of this policy seriously.

Cluster munitions are highly controversial weapons. They are bombs, mortars, and rockets that spread tens or hundreds of smaller bombs (sub-munitions) over a wide area. The fact that the weapons are spread in this way creates a serious danger for civilians during the attack. Even years after the conflict has ended cluster munitions can cause civilian casualties. The large number of sub-munitions that do not explode during the attack creates a ‘de facto’ minefield. The use of these weapons the past 30 years in areas such as Afghanistan, Iraq, and the former Yugoslavia has left a trail of civilian casualties.

It is therefore not surprising that the weapon has faced significant international pressure. Kofi Annan (Secretary General of the United Nations) has called for cluster munitions to be placed on the agenda in 2006. The European Parliament has called on all member states to introduce a moratorium on these weapons, and to ban investments in these weapons. In many countries there are initiatives to ban the production or use of these weapons. Since March 2006, Belgium is the first country to pass a law banning the trade, production and use of cluster munitions.