Home › News
Kaliningrad: Are France and Societe Generale responsible for double standards in nuclear safety?
By: Friends of the Earth France and Greenpeace France
2013-03-06
Paris
Contact: 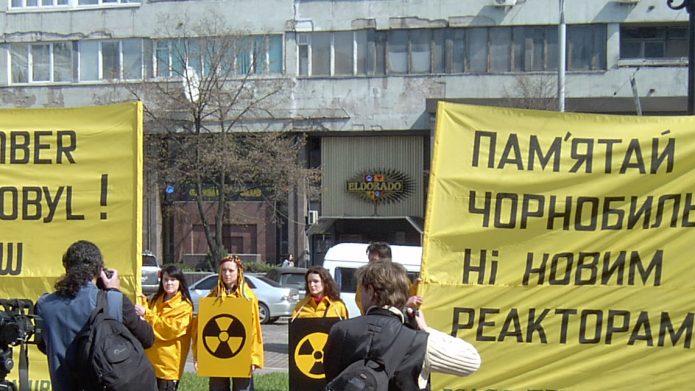 After meeting with Coface and Societe Generale, potential financiers of the Kaliningrad nuclear power plant in Russia through the export finance of Alstom turbines, Friends of the Earth France and Greenpeace France denounce this geopolitical project, due to the enormous risks involved (economics, corruption, human rights, waste management) and the strong local opposition. They ask the French State and Societe Generale to draw lessons from Fukushima, stop their doublespeak and refuse to finance this project immediately, as BNP Paribas has already done.

Announced in 2008, the Kaliningrad nuclear power plant project, located in the Russian enclave between Poland and Lithuania, was officially launched in 2010, and Rosatom started work on the site last year. Presented as an answer to the forecast growing electricity needs locally, this project is in fact above all geopolitical, aimed at allowing Russia to break into the European energy market by selling electricity from the plant to neighbouring countries. The problem is that these countries have already expressed their opposition to the project and refuse to import this electricity, stressing the economic risks of the venture.

The project is also being confronted with a strong local opposition, explains Vladimir Slivyak, from the Ecodefense association, visiting Paris this week: "The majority of the local population is opposed to the project since its beginning - 67% according to a poll conducted in 2007. Our opposition first led to the cancellation of the project before it was brought back on the table in 2008. We have been totally mobilized against the project since then, and have asked four times to organize a local referendum, in vain. Some of us were even stopped from participating in the consultations on the Environmental Impact Assessment (EIA) by local authorities and Rosatom in 2009". This EIA also raises many issues: it did not seriously address the possible alternatives to this nuclear power plant, only partially addressed the waste management issue, and did not address the decommissioning issue or the potential impacts of a major nuclear accident. In addition it has not been submitted to the populations of neighbouring countries, despite their close proximity (the Lithuanian border is only 10km from the site).

Despite these concerns, the French State could still guarantee this project through Coface, and Societe Generale could provide finance in the form of export finance for Alstom turbines, explains Sophia Majnoni, nuclear campaigner for Greenpeace France: "When you add the omnipresent corruption risks in Russia and the fact that the design of the reactors has not been assessed by an independent safety authority in the European Union, you understand that the French government is using doublespeak when it discusses the lessons to draw from Fukushima, and is promoting a double standard in nuclear safety for political reasons. By exporting nuclear risks abroad, to a country that has already had to cope with the Chernobyl catastrophe, a guarantee by Coface on this project would be the ultimate symbol of this incoherence".

Yann Louvel, climate and energy campaign coordinator for the BankTrack network, concludes: "In our meeting with Coface and Societe Generale on the 5th March, we asked them to renounce this project immediately. The project does not meet the criteria in the bank's own nuclear sector policy. The risks are so high that other financial players, including BNP Paribas, have already decided not to finance this project. The French State and Societe Generale have to draw the lessons from Fukushima and follow their example."